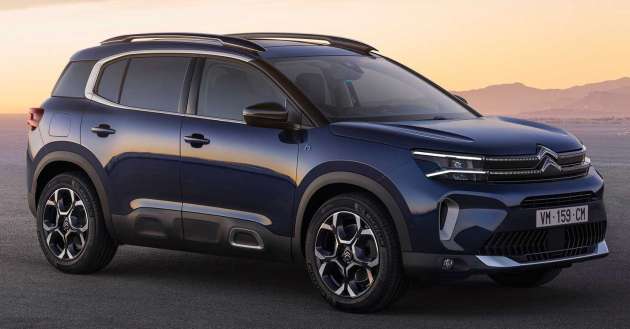 The Citroën C5 Aircross has received a facelift for 2022, almost five years on from the debut of the pre-facelift model, with styling and equipment updates.

For this facelifted version, key changes to the C5 Aircross exterior wears a restyled front end that now features a more integrated lighting assembly, compared to the pre-facelift’s distinctly two-tier setup. The full-width visual of the C5 Aircross’ front fascia has been revised to now wear a pair of dotted lines, each extrapolated from the DRLs within the headlamp assembly, and meet the double chevron logo in the centre.

The front bumper and its intakes have been simplified, with the vertical ones now enlarged and more sculpted into the bumper while the dual, contrast-colour rectangular units on the pre-facelift makes way for a single, near-full-width central intake and a slimmer, secondary unit above the license plate. Along the lower edge, metal-look trim is bookended by the foglamps.

Further along, the A-pillars continue to be in a contrasting black finish, though now the facelift also wears black on the side mirror covers, where these were body-coloured before. Along the sides, the lower door sections continue to wear black platic cladding with a trio of recesses on each side, the first of which is in a contrasting colour, albeit now in a metal-look finish.

At the back, the tail lamps are been revised from using the outgoing quartet of rounded rectangular elements to a trio of staggered element within each enclosure, and the rear bumper remains largely as before, with black plastic cladding featuring foglamps at the lower corners, and joined by a pair of slim exhaust outlets. 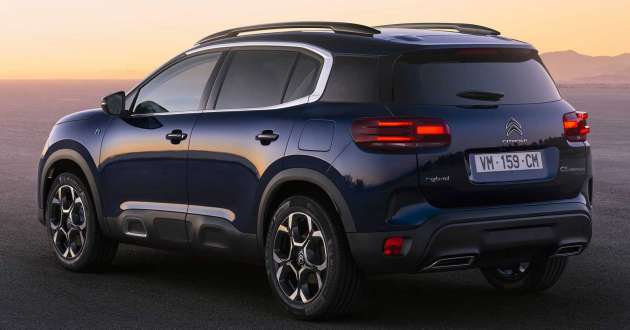 For the driver, the 12.3-inch digital instrument panel appears to have been carried over, and the curved gearlever has been replaced by a toggle-style selector. The multi-function leather-trimmed steering wheel has also been restyled, now of a more distinct three-spoke design.

Citroen has yet to divulge powertrain details, and this could suggest the carrying over of the pre-facelift engine line-up. In Europe, this was comprised of petrol and diesel engines, all of which have conformed to the Euro 6.2 emissions standard from debut in 2018.

In terms of petrol engines, there are the PureTech turbo 130 PS 1.2 litre three-cylinder engine as well as the 180 PS 1.6 litre four-cylinder unit, while on the diesel side there are the 1.6 BlueHDI four-cylinder turbodiesel in 130 PS and 180 PS states of tune. Transmission choices include a six-speed manual, and an eight-speed automatic.