This video by Sanscari Sumit shows the delivery in one of the Nexa showrooms. Apart from delivering the new Baleno to customers in the traditional way of car delivery experience by NEXA, Maruti Suzuki has also put the new Baleno on display at all of its NEXA outlets across the country. The production of the previous iteration of the Baleno was halted at the end of 2021, to make way for the new version. 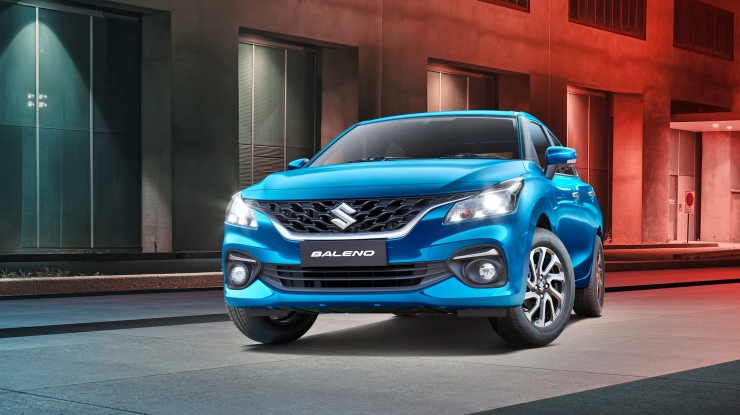 Like before, the new Maruti Suzuki Baleno is continued to be offered in four different variants – Sigma, Delta, Zeta and Alpha. All these variants now come with a revised features list across the lineup. The new Baleno is now offered with only one powertrain option of a 1.2-litre four-cylinder K12N Dualjet petrol engine, which we have already seen in cars like Swift and Dzire.

Apart from the standard 5-speed manual gearbox across the lineup, the Baleno is now also offered with a 5-speed AMT, which has replaced the CVT from the older model. Apart from the base-spec Sigma, all the variants get the option of the 5-speed AMT. The new Maruti Suzuki Baleno features a tweaked design on the outside, which has made it look much sharper than before. The front fascia of the Baleno looks refreshing and sleeker with a new grille and sharper headlamps, which now feature a new LED projector and segmented daytime running LEDs.

Even the tail lamps have been revised, which now look wider and have an L-shaped design. Maruti Suzuki has tweaked the design of the 16-inch diamond-cut alloy wheels and rear quarter glass on the side profile.

Changes inside the cabin as well The cabin of the new Baleno is an all-new place to be inside. Maruti Suzuki has introduced a new 9-inch touchscreen infotainment system in the top-spec Alpha variant, which now operates on an improved Smartplay Pro+ software. Additional features compatible with the new infotainment system are Suzuki Connect telematics, Amazon Alexa and a premium Arkamys sound system.

The new Baleno also gets a couple of new segment-first features like a head-up display and a 360-degree parking camera. It now gets a few features that were not there in its previous iteration, such as cruise control, side and curtain airbags, rear AC vents and hill hold assist.