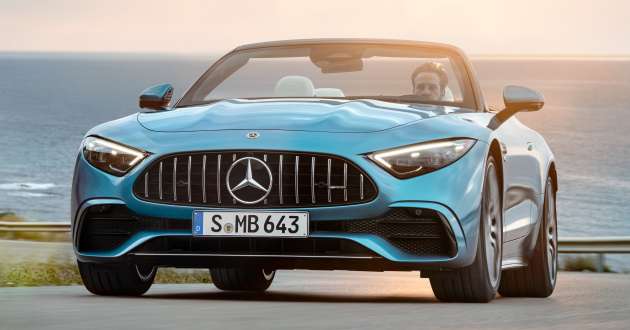 In November last year, we were introduced to the R232 Mercedes-AMG SL, which is the seventh generation of the SL that will only be available as an AMG model. Replacing the GT Roadster, the SL is certainly a striking thing to look at, with plenty of grunt courtesy of the M177 4.0 litre twin-turbocharged V8 that is standard on the SL 63 and SL 55 – the two initial launch variants.

However, what if you want the looks but can make do with half the number of cylinders and displacement? Well, you can always consider this, the new SL 43. The entry-level option swaps out the twin-turbo V8 for a single-turbo four-cylinder engine with a displacement of just 2.0 litres.

Before you scoff, the 2.0 litre unit in question is the M139, which Mercedes-Benz fans will know is the engine code of the A 45 hot hatch. For the SL, AMG engineers redesigned the forced induction system to incorporate an electric exhaust gas turbocharger that is based on the same technology used by the Mercedes-AMG Petronas F1 Team. 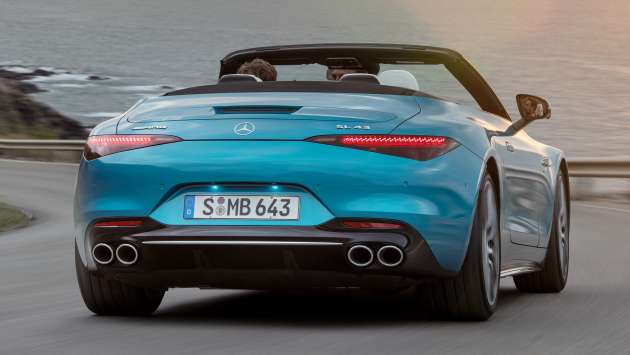 The SL’s M139 features an electric motor measuring around four-cm thin that is integrated directly on the turbocharger shaft between the turbine wheel on the exhaust side and the compressor wheel on the intake side. The motor spins the shaft up at low revs until the exhaust gases take over, resulting in improved immediate response from idle speed and across the entire engine speed range.

Additionally, the system can maintain the boost pressure at all times if needed, ensuring the driver has access to power when needed. The electric turbocharger works at speeds of up to 170,000 rpm and operates on a 48-volt mild hybrid system, which also feeds a belt-driven starter-generator (RSG).

The reduced mass up front allows for lighter torsion bar stabilisers, with AMG Ride Control steel suspension coming as standard, although buyers can specify adaptive adjustable damping as an option. The powertrain is linked to the AMG Dynamic Select system, which offers five drive modes (Slippery, Comfort, Sport, Sport+ and Individual), with the AMG Dynamics system allowing for fine-tuning of the ESP’s functions.

Adding on the AMG Dynamic Plus package nets you an additional Race drive mode for the AMG Dynamic Select system, allowing with dynamic engine mounts, an electronically controlled limited-slip rear differential, a 10 mm lower ride height and yellow-painted brake calipers. Rear-wheel steering is another option that is available, along with various styling packages depending on your affinity for chrome, black and carbon-fibre trimmings. 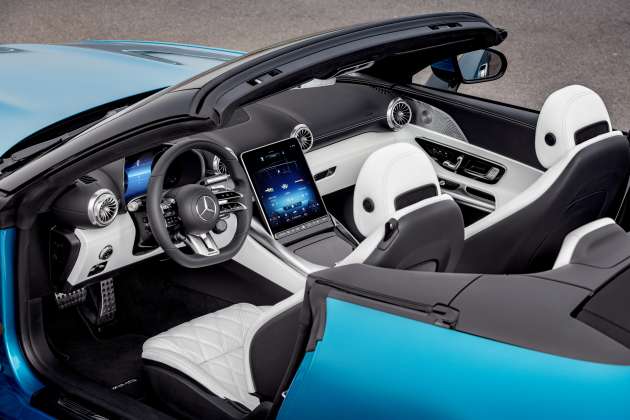 As for the looks, the SL 43 is differentiated from the V8-powered variants by its specific front and rear aprons. For instance, the lower intake on the front bumper has been reprofiled to be tamer in appearance and lacks vertical fins, while the rear gets a more subtle diffuser element sandwiched between circular tailpipes instead of angular ones.

An optional Aerodynamics Package throws on larger flics on the front and rear bumpers, a larger rear diffuser and modifies the speed thresholds of the active rear spoiler and its steeper angle of attack of 26.5 degrees (instead of 22 degrees). Wheels measuring 19 inches are standard, but these can be replaced with 20- and 21-inch sets for a cost.

Inside, you’ll still get a 12.3-inch digital instrument cluster and a massive 11.9-inch portrait touchscreen – both powered by the latest Mercedes-Benz User Experience (MBUX) and the latter can be tilted electrically from 12 to 32 degrees to prevent sunlight glare when the fabric soft top is brought down.