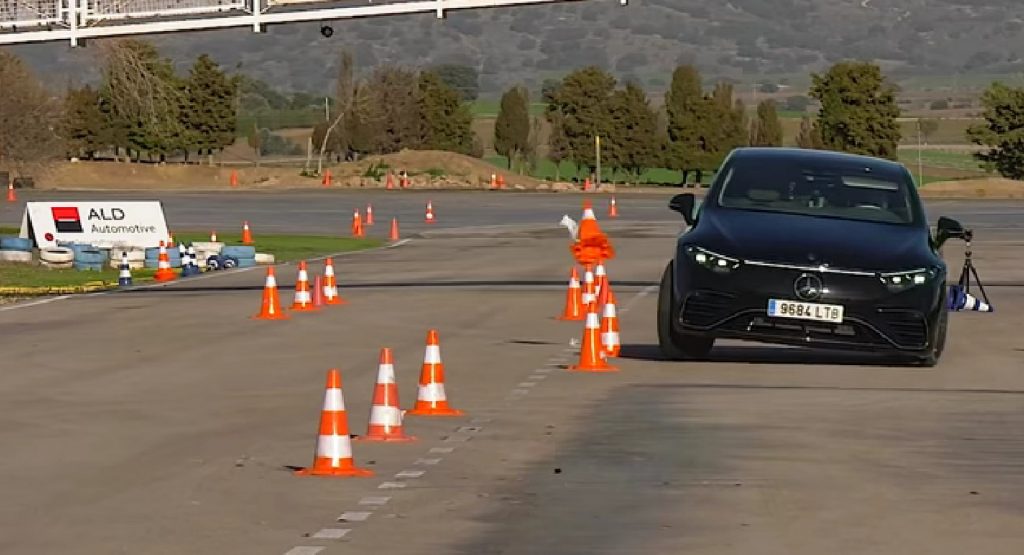 The new Mercedes-Benz EQS 580 has been through the moose test by Spain’s km77.com to determine how well the electric sedan handles emergency maneuvers on the highway and the results were poor, according to the outlet.

The best the electric vehicle could manage was an entry speed of 72 km/h (44.7 mph) before it started hitting cones. In that test, which was run in Comfort mode with the regenerative braking set to normal, it slowed to 64 km/h (39.7 mph) by the middle of the maneuver, and exited the cones at a speed of 52 km/h (32.3 mph).

The channel applauded the EQS’s four-wheel steering, which it suspects made it more capable in the test, but took some getting used to. The Mercedes S-Class, by comparison, managed a best speed of 74 km/h (45.9 mph) despite the model tested not featuring four-wheel-steering.

The media channel reasons that the S-Class’s superior performance came as a result of its lower weight (the EQS 580 has a curb weight of 5,888 lbs or 2,670 kg while the S 400d, 4,541 lbs or 2,060 kg), something that electric vehicles struggle with because of their heavy battery packs. Some (admittedly smaller) EVs have managed much better, though.

This test revealed that the EQS has a tendency to understeer in higher-speed testing, causing it to hit cones, though the driver did not lose control of the vehicle as they did in the Enyaq iV. Higher speed attempts were made in Sport mode with normal regenerative braking but the driver did not notice an appreciable difference between modes. In both cases, there was moderate body roll during the moose test.