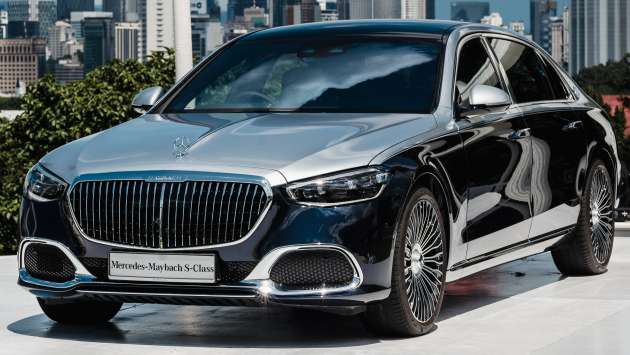 Just two months after the launch of the new W223 S-Class, Mercedes-Benz Malaysia (MBM) has followed it up with the introduction of the Z223 Mercedes-Maybach model today. As before, this even more luxurious variant of the world’s premier luxury sedan is aimed at bigwigs looking to recline in ultimate comfort, surrounded by endless wood and cowhide.

As you can imagine, none of this comes cheap. The sole S 580 4Matic variant lives in a completely different price bracket from the “standard” S 580 e, priced at an eye-watering RM1,928,816 – a whopping RM1.23 million more. As always, this figure includes a 50% SST rebate (this is a fully-imported car after all, unlike the S 580 e) and a four-year, unlimited-mileage warranty.

This not-inconsequential amount of money does at least buy you a physically bigger car. At 5,469 mm long, the Maybach S-Class is 180 mm longer than even the long-wheelbase version of the regular model – all of it going to the 3,396 mm wheelbase and, in turn, the rear passengers. Width is identical at 1,921 mm, although the car’s height has been raised slightly to 1,510 mm, presumably for greater headroom. 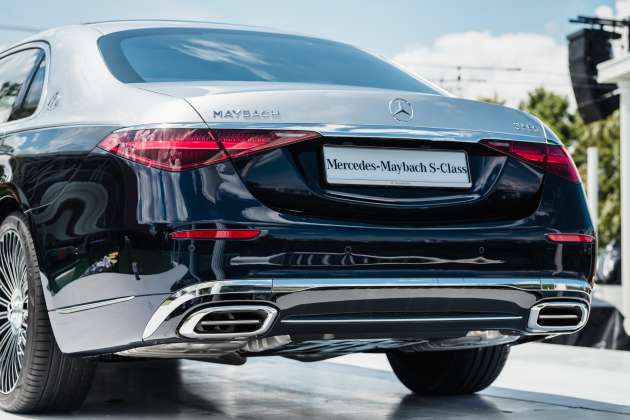 Equipped with a nine-speed 9G-Tronic automatic gearbox and 4Matic all-wheel drive, the Maybach S 580 e will get from zero to 100 km/h in just 4.8 seconds. Fuel consumption isn’t a particular concern for buyers of these cars, but just so you know, the S 580 uses between 10.2 and 10.9 litres of petrol every 100 km.

Under the skin, the Maybach S 580 distances itself from the S 580 e, the Airmatic air suspension system now fitted with E-Active Body Control 48-volt active roll stabilisation, using the stereo cameras to scan the road ahead. The car also comes with rear-wheel steering, which can turn the rear wheels up to 4.5 degrees, shortening the turning circle by two meters. A unique Maybach drive mode softens the throttle response, shifts gears at lower revs and starts off in second gear for maximum comfort.

Setting the Maybach model apart from the standard S-Class on the outside are the unique grille with vertical slats and the Maybach badge, chrome front air intake trim, chrome B-pillars, a separate rear quarter light window, a more upright C-pillar for greater privacy and a chrome trimmed rear bumper insert with slatted twin exhaust exits. The Malaysian-spec model also rides on elaborate 21-inch multi-spoke forged alloy wheels. A two-tone paint finish with a pinstripe on the shoulder line is available as an (over RM100,000) option.

Step inside through the power-assisted rear doors and you’ll find that the Maybach S 580 is a strict four-seater, coming as standard with First-Class rear seating. This adds a full-length centre console that runs upwards around the rear seats, enveloping the occupants. The pews themselves are of course unimaginably plush, upholstered in Maybach Exclusive Nappa leather and coming with powered adjustment, ottomans, pillow headrests and memory, heating, ventilation and massage (including for the calves) functions. 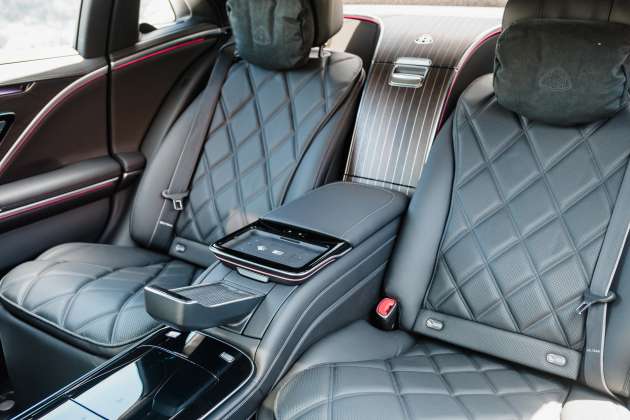 Passengers can work on tables that fold into the centre console when not in use. Alternatively, they can recline up to 43.5 degrees, push the front passenger seat forward using the provided seven-inch Android tablet and watch movies on the twin 11.6-inch touchscreens on the front seat backs. You can also stow your favourite bottle of champagne in the built-in fridge and pour it into the custom silver-plated flutes.

Beyond that, the Mercedes-Benz User Experience (MBUX) is extended to the rear of the car. Aside from the two rear displays, the car also features the MBUX Interior Assistant, which proactively activates various functions, such as automatically moving an unoccupied front passenger seat to the chauffeur position.

The car can also switch on the interior lighting when a rear passenger reaches for the grab handle and extend the seat belt feeder when they’re reaching over to fasten it. The driver can also open the powered rear windscreen sunblind simply by turning around and looking back. The rest of the car is as per the S-Class, featuring an 12.8-inch OLED portrait-format centre touchscreen (which incorporates the functions of the four-zone automatic climate control) and a 12.3-inch 3D-effect instrument display. One feature not offered on the regular S 580 e is the massive augmented-reality head-up display, projecting key information such as navigation guidance onto the view ahead. The 253-LED, 64-colour active ambient lighting system also has two unique colour themes, rose gold white and amethyst glow.

Unfortunately, you don’t get the Burmester 4D surround sound system, although you can get it as an option. The standard 3D system is nothing to be sniffed at, however, with 15 speakers and 710 watts of power. Active noise cancellation is also fitted, turning the Maybach S 580 into a rolling sensory depravation chamber. 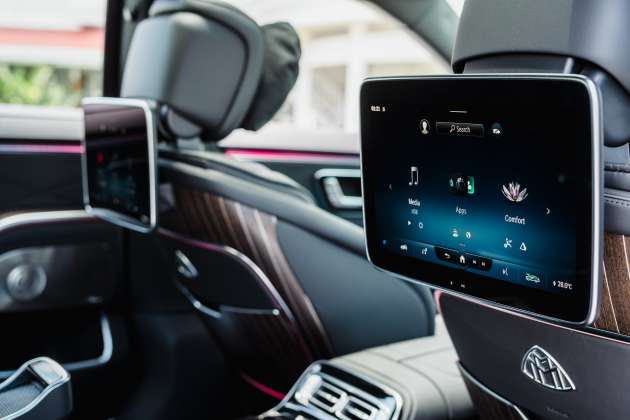 Safety-wise, the Maybach S 580 comes with the same barrage of driver aids as the standard model. The Driver Assistance package includes autonomous emergency braking with improved cross traffic and pedestrian detection, adaptive cruise control with stop and go (which now prevents collisions at up to 130 km/h) and lane centring assist for Level 2 semi-autonomous driving.

The car is also fitted with rear frontal airbags and an integrated rear seat cushion airbags to prevent submarining. These, along with rear side airbags and beltbags, bring up the airbag count to a scarcely-believable 14. You also get Pre-Safe and Pre-Safe Impulse Side, the latter raising the car up to better protect occupants in a side impact collision.

It should be noted that the listed price is for the exact specification of the car shown here, minus the two-tone paint. This being such an exclusive car, of course, all orders are on an indent basis (with a significant waiting period, might we add), with buyers able to option their cars exactly for their liking.