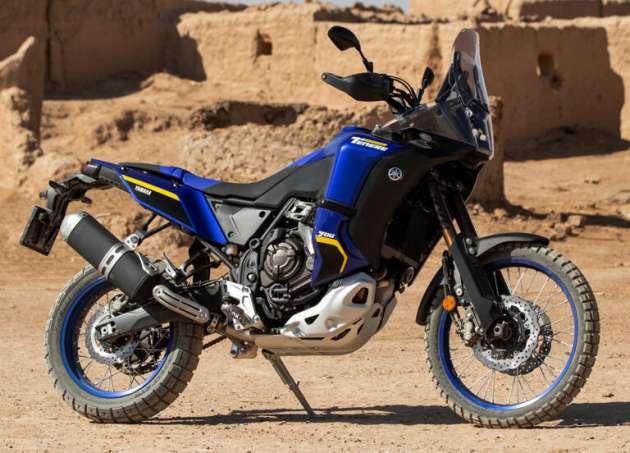 While Malaysian riders await the release of the Yamaha Tenere 700, scheduled for mid this year, Yamaha has turned things up a notch with the 2022 Yamaha Tenere 700 World Raid. Designed as a true dual-purpose motorcycle as opposed to the adventure-tourer with large aluminium boxescovered in Mae Hong Son stickers and never getting further than Lemang Tok Ki we commonly see on the Malaysian highways, the Tenere 700 traces its beginnings all the way back to the Yamaha XT600, some 40 years ago.

The World Raid variant of the Tenere 700 is meant for the long distance motorcycle explorer, coming with 23-litre dual side-mounted fuel tanks. Coupled with the existing 16-litre fuel tank, Yamaha says this gives the Tenere 700 World Raid some 500 km of range.

The twin auxiliary tanks are mounted low on either side of the bike along with the fuel pump, lowering the centre of gravity to what it currently is on the Tenere 700 and preserving the handling characteristics. The highest point on the new twin side-mounted tanks is lower than the top of the tank on the Tenere 700, reducing the height difference between the tank and seat to give a much flatter profile.

Seat height for the Tenere 700 World Raid is set at 890 mm and has a flatter profile for a smooth transition between the seat and tank. This enables the rider to move backwards and forwards with minimal effort when shifting body weight to maintain control on rough terrain while the ride ergonomics of the Tenere 700 World Raid allows for standing and seated riding positions.

For suspension, the 43 mm diameter upside-down Kayaba forks give 230 mm of wheel travel, some 20 more travel than on the stock Tenere while an adjustable Ohlins steering damper is fitted as standard equipment. Fork weight is reduced with the use of lightweight fork internal components despite the longer travel and are fully-adjustable, with an air bleed screw for adjustment to suit differing loads and terrain.

Rear suspension sees a similar revision, upgraded to match the performance of the Kayaba forks and with 220 mm of wheel travel has 20 mm more shock movement over the stock unit on the Tenere 700. Naturally, the rear shock on the Tenere 700 World Raid is fully adjustable for spring preload, as well as compression and rebound damping.

Inside the cockpit which is fitted with a USB charging port, a new 5-inch colour TFT-LCD is linked with the bike’s Communication Control unit (CCU) giving connectivity to the rider’s smartphone using the Yamaha MyRide app. The screen is configurable with three different themes – Explorer with a digital design, Street featuring a tachometer with a circular dial in the traditional manner and Raid resembles a rally rider’s road book with twin independent countdown tripmeters. 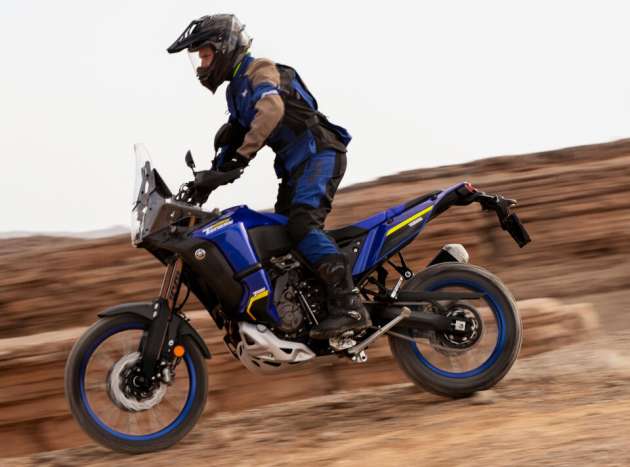 Braking is done by Brembo, with 282 mm diameter dual wave front discs and single 245 mm rear wave disc. Standard fitment is two-channel ABS which can be switched to one of three modes, selectable while the Teneere 700 World Raid is stationary – Mode 1 is required for street riding with ABS acting on both wheels while Mode 2 is front wheel only ABS and Mode 3 turns everything off.