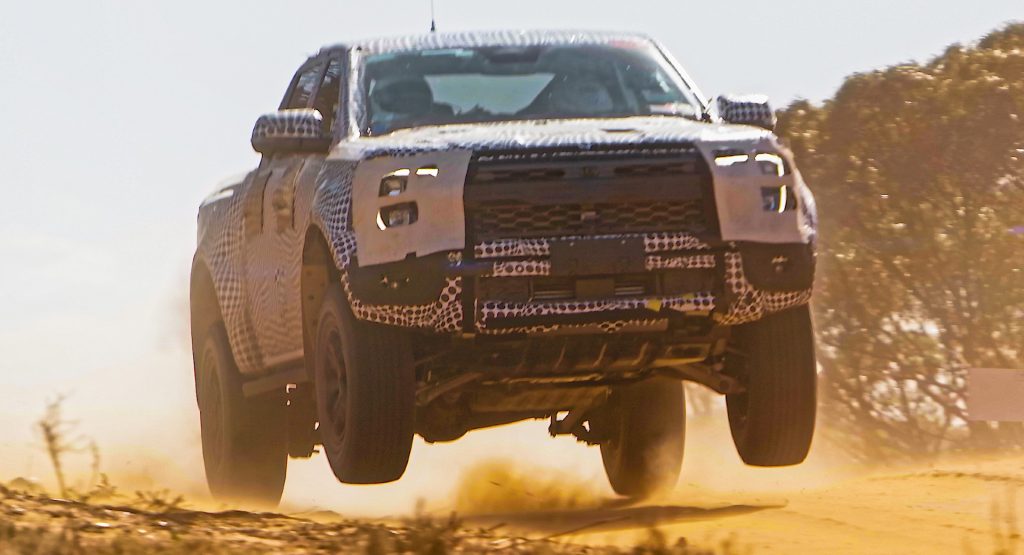 Ford dropped the first teaser for the upcoming Ranger Raptor while announcing its debut on February 22 at 07:00 GMT through Ford Europe’s YouTube channel.

A camouflaged prototype of the flagship variant of the new generation Ranger can be seen driving at high speed on a dirt track, jumping, sliding, and testing the heavy-duty suspension that has been upgraded over the base model.

See Also: Everything We Know About The Dune-Blazing 2023 Ford Ranger Raptor

While the camo hides the design details, it is clear that the Ranger Raptor has wider front and rear fenders, meatier tires, more underbody protection, and increased ground clearance over the stock Ranger. We can also see a different grille and bonnet as well as redesigned bumpers with fog lights and skid plates.

Τhe new Ranger Raptor will be powered by a turbocharged Ecoboost V6 engine, with two likely candidates being a reworked twin-turbo 2.7-litre unit from the Bronco or the turbocharged 3.0-litre V6 from the Explorer. Either way, it will be the most powerful variant of the Ranger offering greater performance on and off the beaten track.

Like its highly acclaimed predecessor, the new Ranger Raptor was developed by Ford Performance for off-road enthusiasts. The automaker says it is “engineered with smarter technology controlling tougher hardware”, referring to it as “the most advanced Ranger ever”.