Sequoia has been an apt name for Toyota’s full-size SUV as the second-generation model has seemingly been around as long as California’s famous redwood trees.

Dating back to 2007, the second-generation Sequoia has been surpassed by newer competitors such as the Chevrolet Tahoe, GMC Yukon, Ford Expedition, and Jeep Wagoneer. However, there’s a new sapling in the forest and it’s heavily inspired by the 2022 Tundra.

Set to arrive at U.S. dealerships this summer, the 2023 Sequoia is a radical departure from its predecessor as curvaceous styling has been replaced by sharp lines and chiseled surfaces. The front end closely echoes the Tundra as there’s a massive grille flanked by T-shaped headlights.

Designers also gave the SUV blacked out A-pillars and muscular fenders reminiscent of the pickup. They’re joined by streamlined bodywork, a more modern greenhouse, and an upright rear end with slender taillights as well as prominent Sequoia badging.

Each trim has its own distinctive styling features and Kevin Hunter, the President of Toyota’s Calty design studio, said “Our primary design goal for Sequoia was to create a sophisticated, yet tough and active lifestyle SUV that looks capable of handling a diversity of big adventure needs.” He added, this “holds true whether it’s a night out on the town with friends, towing a boat to the lake with family, or taking a more extreme off-road adventure.”

While reaction to the model will likely be mixed, buyers looking for a sportier appearance can opt for a TRD Sport package. Available on the entry-level SR5 trim, the package adds 20-inch matte black wheels, Bilstein shocks, and TRD-tuned springs. The cabin also gets a minor makeover thanks to aluminum pedals and a red push-button ignition.

There’s also a new TRD Off-Road package, which takes things in a decidedly more rugged direction. It features TRD-tuned shocks and springs as well as a locking rear differential. They’re joined by unique 18-inch alloy wheels and a red front driveshaft for “added flair.” Speaking of the latter, buyers will find aluminum pedals and a red push-button ignition.

The TRD Off-Road package also includes Downhill Assist Control, a Multi-Terrain Select system, and a Multi-Terrain Monitor that provides an assortment of camera views. They’re joined by Crawl Control, which effectively acts as a low-speed cruise control system so you can focus on avoiding obstacles. 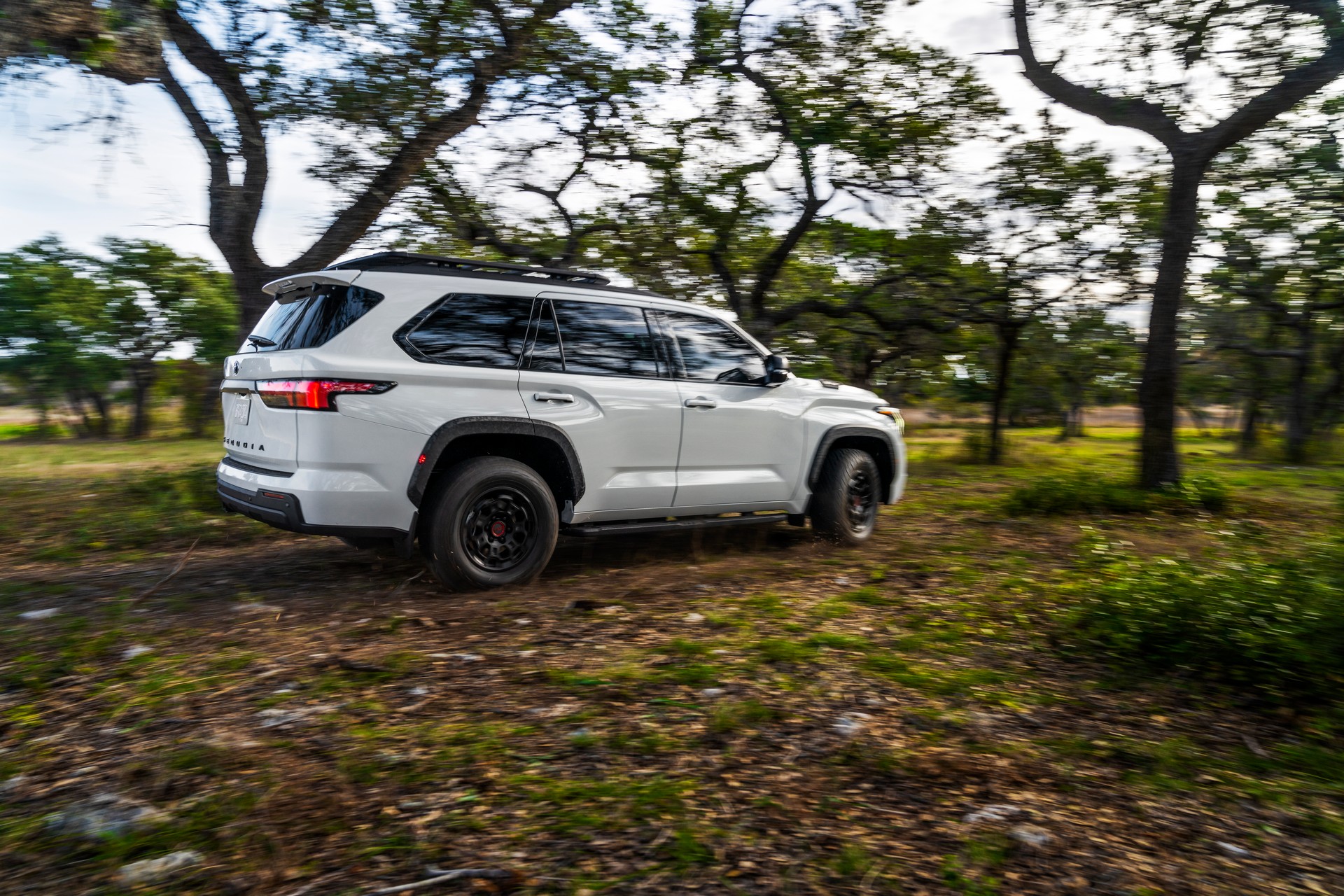 Of course, if you really want to go off-roading, you should upgrade to the Sequoia TRD Pro. It features many of the same upgrades as the TRD Off-Road package as it comes equipped with a locking rear differential, Multi-Terrain Select, Crawl Control, and Downhill Assist Control. However, they’re joined by FOX internal bypass shocks and an aluminum front skid plate.

Those aren’t the only changes as the TRD Pro can easily be distinguished by a “TOYOTA” branded grille, which features marker lights as well as an integrated light bar. Other highlights include a roof rack, a dual exhaust tip, and 18-inch alloy wheels with a black finish as well as an “increased offset to provide a wider stance.” Buyers will also find black accents, technical camo, and a unique interior.

A Modern Interior That Echoes The Tundra 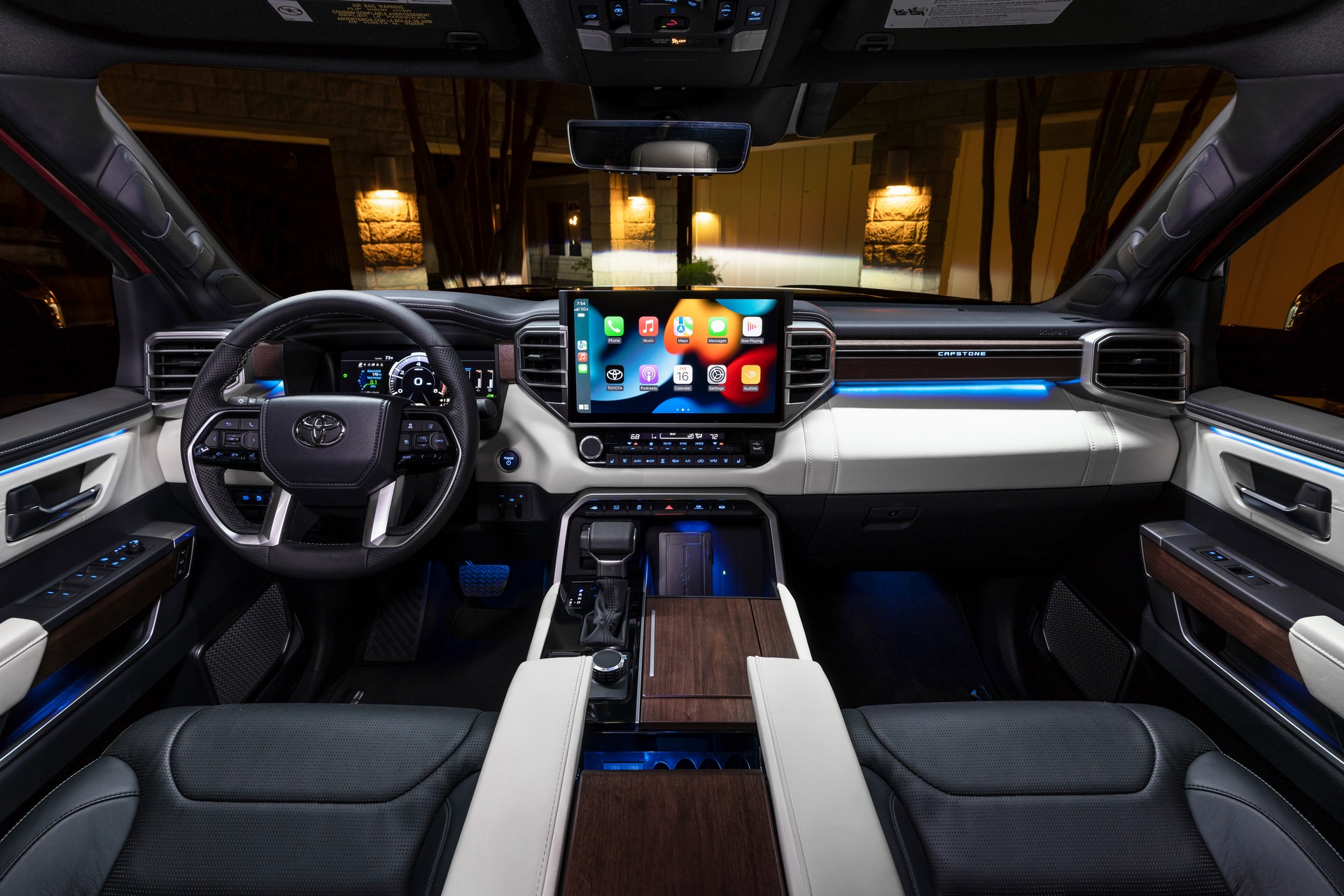 Moving into the cabin, the dated controls and technology have been replaced by a modern interior that largely carries over from the Tundra. It’s a huge improvement and one that’s been long overdue.

Toyota didn’t go into many specifics, but even the entry-level SR5 variant will come equipped with a 12.3-inch digital instrument cluster and an 8-inch Toyota Audio Multimedia system. The latter is a touch- and voice-focused infotainment system, which features cloud-based navigation and an available Intelligent Assistant that responds to the “Hey Toyota” wake word.

Of course, the big thing that separates the Sequoia from the Tundra is the third-row. Unfortunately, it doesn’t appear to follow in the footsteps of competitors by folding flat. This seems like a missed opportunity, but Toyota made the best of the situation by equipping the model with an exclusive sliding third-row and an adjustable cargo shelf system.

As a result, the third-row can slide 6 inches (152 mm) to either maximize legroom or cargo space. To make up for the lack of fold-flat seats, the adjustable cargo shelf system features three preset heights including one that matches the height of the rear seats when they’re folded down.

Full details will be release closer to launch, but the entry-level SR5 can be equipped with a Premium package that adds SofTex seats, a power third-row, and a 14-inch Toyota Audio Multimedia system. The package also includes a hands-free power liftgate and 120-volt power outlets.

Buyers looking for more luxury can upgrade to the Limited trim, which adds a heated steering wheel and heated / ventilated front seats. The model also includes content from the SR5 Premium package as well as manual sunshades for rear passengers.

The Platinum ups the ante with second-row captain’s chairs as well as heating and ventilation in the first two rows. Buyers will also find a wireless smartphone charger, a panoramic moonroof, a head-up display, and a 14-speaker JBL premium audio system.

Sitting at the top of the range is the all-new Sequoia Capstone, which echoes the recently introduced Tundra variant. It features a unique exterior with power running boards, additional chrome accents, and 22-inch chrome wheels.

While the exterior brings the bling, the cabin is focused on luxury as drivers will find two-tone semi-aniline leather seats and American Walnut wood trim. They’re joined by an illuminated “Capstone” logo on the dash as well as acoustic front door glass.

A Standard Hybrid Powertrain With 437 HP 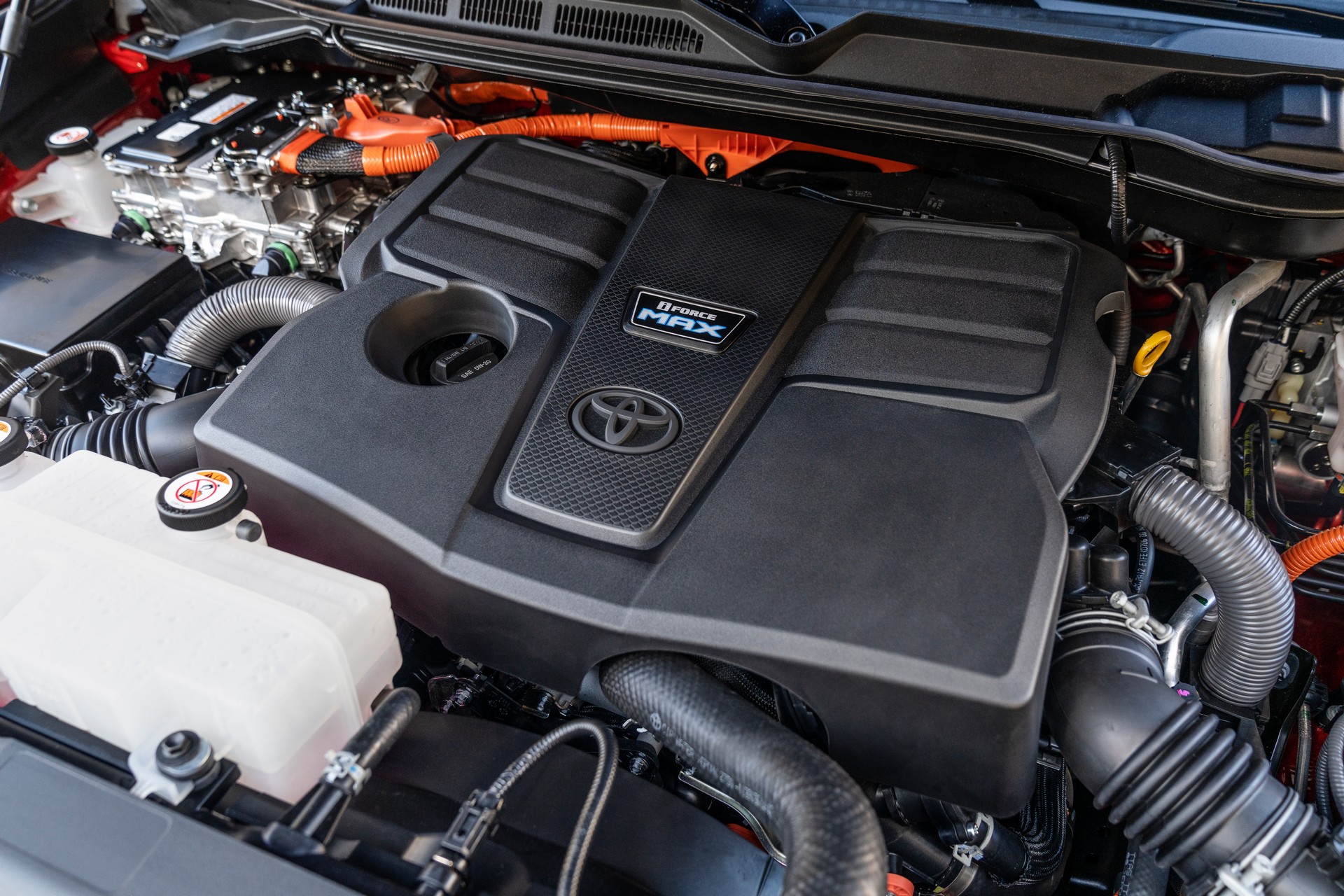 The changes continue under the hood as the Sequoia will be offered exclusively with an i-Force Max powertrain. That’s a promising development as it features a twin-turbo 3.5-liter V6 and an electric motor that is effectively sandwiched between the engine and the 10-speed automatic transmission.

The good news doesn’t end there as the hybrid powertrain bests everything in the Tahoe’s engine compartment and also compares favorably to the Expedition’s 3.5-liter EcoBoost V6. In higher-end variants, that engine produces up to 440 hp (328 kW / 446 PS) and 510 lb-ft (691 Nm) of torque on premium fuel.

Fuel economy estimates weren’t released, but Toyota hinted it will be a “huge improvement” over its predecessor. That’s easy to believe as the 2022 Sequoia has a dreadful fuel economy rating of 13 mpg city, 17 mpg highway, and 15 mpg combined with rear-wheel drive.

While body-on-frame SUVs are a bit of a rarity today, the 2023 Sequoia keeps that tradition alive. However, it promises to be far more comfortable than its predecessor as it features a fully boxed frame and an architecture that is shared with the Tundra as well as the Land Cruiser and Lexus LX.

Toyota didn’t delve into specifics, but said rigidity and ride comfort have been improved thanks to the use of new techniques such as laser welding. The automaker also noted the SUV has been equipped with a new electric power steering system that offers improved feel. Customers will also find a modern multi-link rear suspension, which promises to deliver a smooth ride. The latter can be further enhanced with features such as an Adaptive Variable Suspension and a Load-Leveling Rear Height Control Air Suspension.

Since customers use their SUVs for more than just hauling people, engineers increased the towing capacity by nearly 22 percent to 9,000 lbs (4,082 kg). That’s more than the Tahoe and Toyota noted the Sequoia will be offered with a Tow Tech Package, which includes Straight Path Assist as well as a Trailer Backup Guide. It’s also worth mentioning power folding, extending, and retracting tow mirrors are now available on the Sequoia for the first time.

On the safety front, all Sequoias will come equipped with the Toyota Safety Sense 2.5 suite of driver assistance systems. It includes a Pre-Collision System with pedestrian and bicyclist detection. The system even works when making left-hand turns and can automatically apply the brakes if a collision is imminent.

We’ll learn more about the Sequoia in the months ahead, but it will be built in San Antonio, Texas and fight for a larger slice of the full-size SUV segment.