Electric vehicles are future of mobility and we have mentioned that several times in our websites in the past. There are manufacturers like Tata, MG who manufacture electric cars and several two wheeler manufacturers have also entered this space. We have seen several video online where people are coming up with ideas to build electric vehicles and miniature working models of original cars. Here we have one such video, where a 67 years old man from Kerala built an electric car for his daily commute.

The video has been uploaded by Village Vartha on their YouTube channel. The video is about 67 year old Antony John from Kerala’s Kollam district who built an electric car for himself. Antony John is a career consultant and has an office around 30 kms away from his house. He was using an electric scooter for his commute. As Antony was growing old, he wanted a vehicle that would offer him a comfortable ride and also keep him away from rain and heat. He wanted an electric vehicle but, at that time, there were no options available to him in the market.’

He started thinking of building an electric car by himself in 2018. He did his research about the design and other electrical side of the car. To build the body of the car, he got in touch with a garage that has experience in building body for buses. Antony gave them a design of a car that he found online and the garage build the body accordingly. It is a very small car that can accommodate two adults. It has seat at the rear but, that is sufficient for children only. Antony mentions that he got the body built from a workshop but, the electrical part of the car was all done by him. 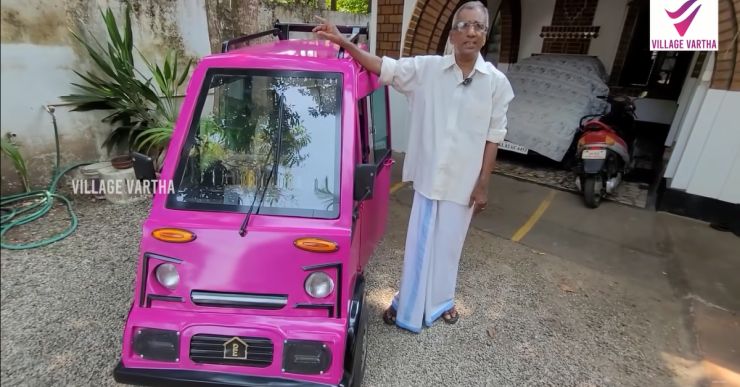 He sourced the batteries, motor and wiring from a vendor from Delhi. He started working on the car in 2018 and due to pandemic, the work got delayed. As Antony does not have experience in building an EV, mistakes were made and that meant it took him more time to finish the project. He miscalculated the battery power and the car was not offering him the desired driving range at first. Once the lockdowns and restrictions were lifted, he got in touch with the vendor again and he suggested a bigger capacity battery for the car.

How is it legal though?

This is an EV with a power rating that is really low. Also, it has a max speed that is less than 25 kmph. Such electricle vehicles do not a registration plate in India. But, the driver must have a valid driving license.

Antony mentioned that he spent around 4.5 lakh on this project and is also working on another electric vehicle.

After installing the new battery, the electric car was offering him a maximum driving range of 60 kms. He is very proud of him creation and he uses the car daily to commute to his office. He mentions that the electric car is only used by him and he has a Maruti Alto when he wants to travel with his family. The exterior design is very basic and the interior also offers bench seats, steering, accelerator and a brake pedal. This is a very small car and it can easily got through the streets where a normal car cannot go.