This unusual Ford Mustang Mach 1 is fitted with a rare Ford 427 “Cammer” engine, a V8 with single overhead cams per bank allowing higher RPM operation. Ford originally developed the engine to take on Chrysler’s 426 Hemi in the world of NASCAR.

A Mach 1 Mustang fitted with the 7.0 liter Ford pushrod V8 is a quick car by any standard, particularly in a straight line, but the use of the Cammer 7.0 liter V8 with its SOHC takes it up a few notches – from 335 hp to 616 hp.

Fast Facts – The Mach 1 And The Mighty Cammer V8

When Ford engineers set out to develop a new V8 to challenge the Chrysler 426 Hemi V8 in the fiercely competitive world of NASCAR racing they knew they had their work cut out for them. 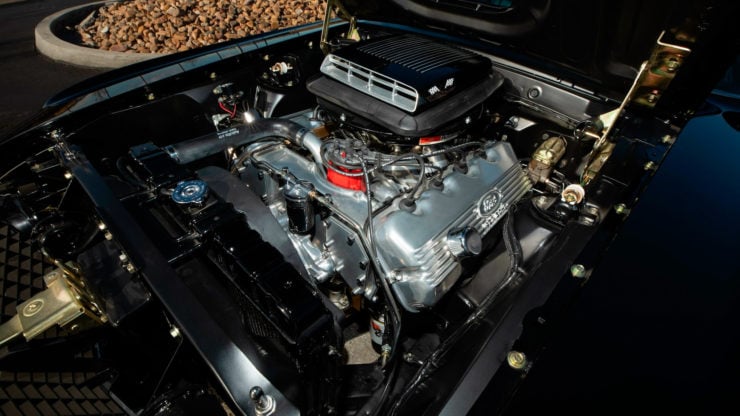 The Cammer V8 only barely fits into the cavernous engine bay on the Mach 1. No production car was ever fitted with this engine from the factory, and only few could have accommodated it.

To both simplify and speed up the development process they started with a preexisting engine block – the race-proven 427 FE pushrod V8. The block was modified and a pair of new heads were designed that, very unusually for an American V8 at the time, had a single overhead cam per bank.

It was this additional power that Ford engineers were chasing. They took the FE block and modified it to accept the new heads they have developed, the overhead cams would be powered by a 6 ft (1.8 meter) long timing chain and a slew of other minor changes would be made to the engine to safely permit higher-RPM usage.

The length of that timing chain would quickly become a problem for the engine, it necessitated that one cam be a mirror of the other, and under high-RPM usage the cam timing could vary by 7º or more due to the chain stretching. 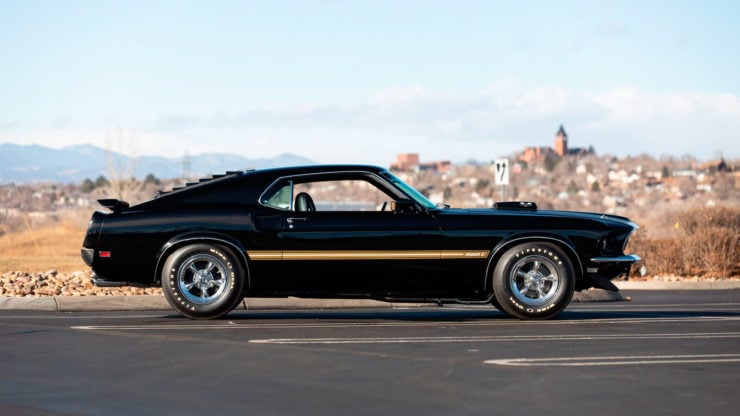 The Mach 1 Mustang includes a series of performance improvements with a package of exterior mods like a decal package, hood pins, and front lip spoiler, a rear trunk lid spoiler, and in some cars, the famous shaker hood.

Sadly, before the engine could even turn in a single lap, it was banned by NASCAR along with the Chrysler Hemi engine as part of a crack down on “special racing engines.”

Rather than dump the Cammer project Ford continued to develop the engine in the hopes of changing the minds of those making decisions at NASCAR, in the meantime they sent the engine off into the world of drag racing – where it proved wildly successful.

Many of the big names in 1960s drag racing were putting the Cammer to good use, including Bill Lawton who won the AHRA and NHRA Winternationals in 1966. Other Cammer pilots included Mickey Thompson, Gerry Schwartz, Tommy Grove, Tom Hoover, Pete Robinson, Connie Kallita, and many others. 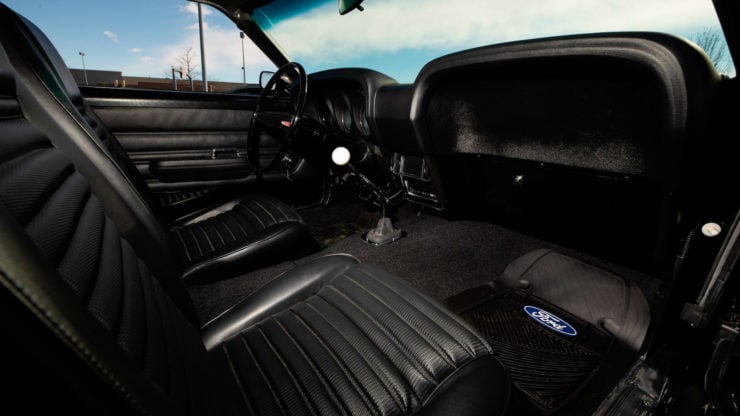 The interior of the car is largely the same as the original Mustang, save for that Hurst shifter and the view out the windshield of that air scoop in the hood.

These successes should be no great surprise, as many drag racing outfits were getting over 2,500 hp out of their supercharged Cammers.

The car you see here was nicknamed “The Sin City Shaker” thanks to its combination of a Ford Cammer V8 engine and a shaker hood.

As a Mach 1, the car has that distinctive livery on the outside, including side stripes, a matte black hood with hood pins, a front lip spoiler, and a rear trunk lid spoiler. Inside you’ll find a black-on-black interior and a Hurst cue ball shifter.

This unusual Mach 1 is due to roll across the auction block with Mecum in mid-March, and it’s being offered with no reserve. If you’d like to read more about it or register to bid you can click here to visit the listing. 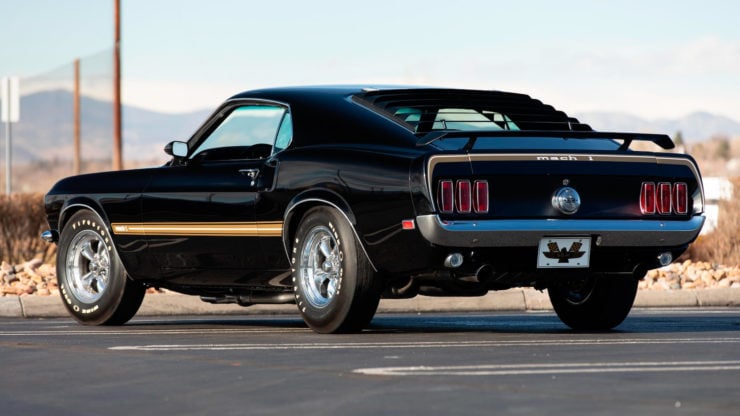 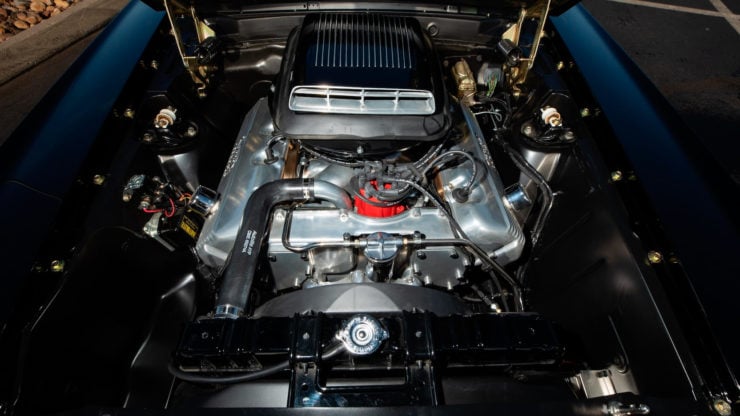 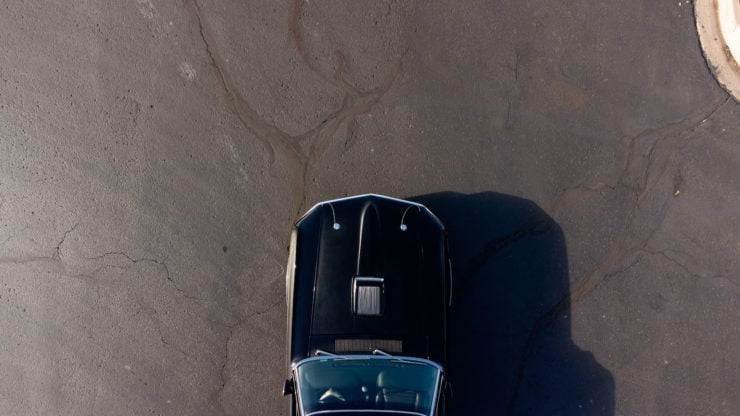 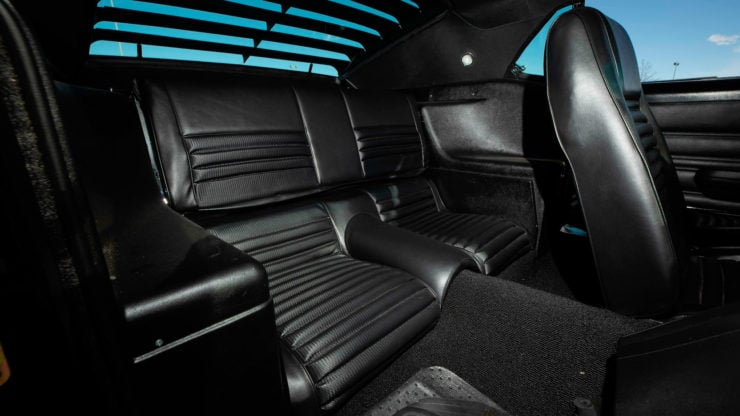 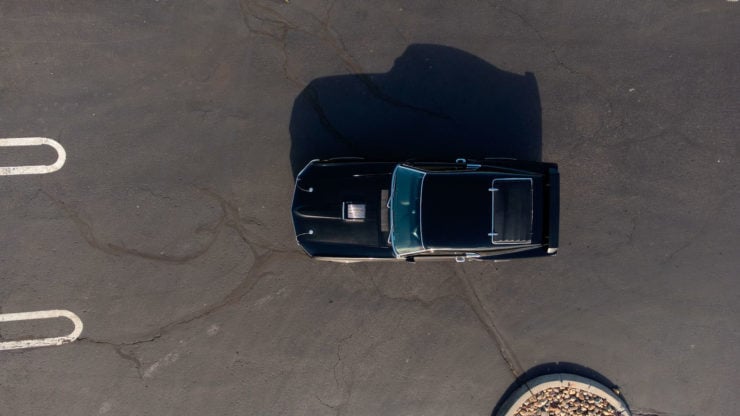 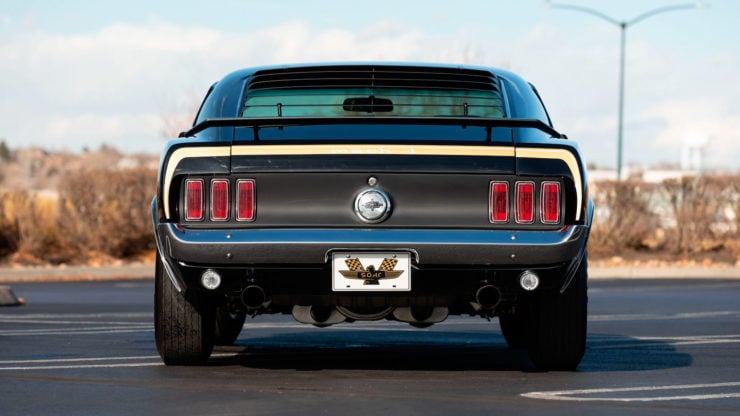 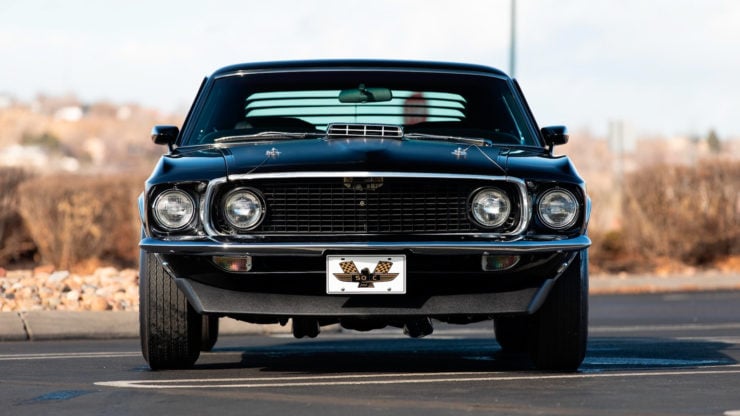 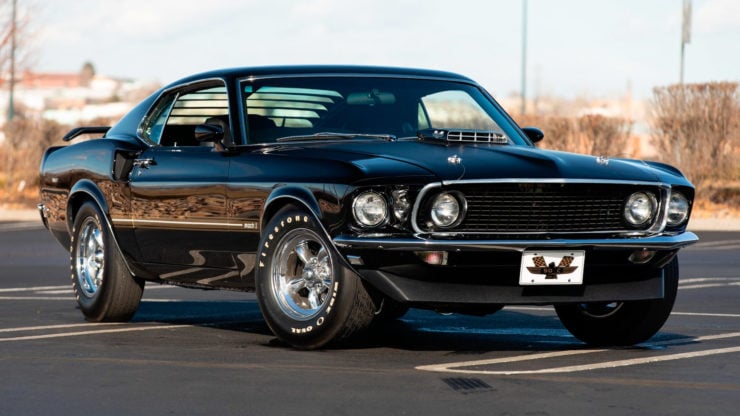 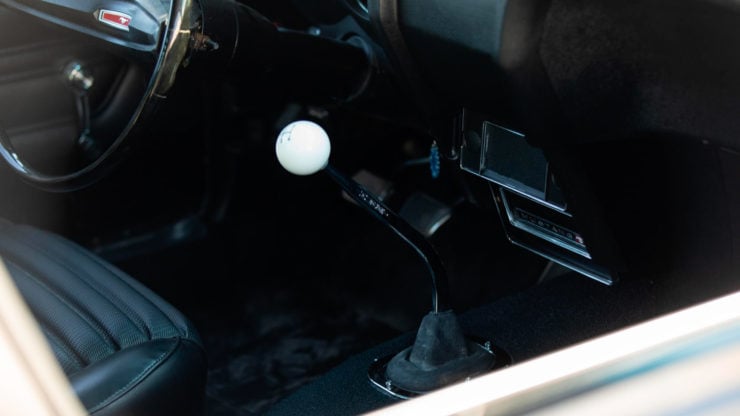 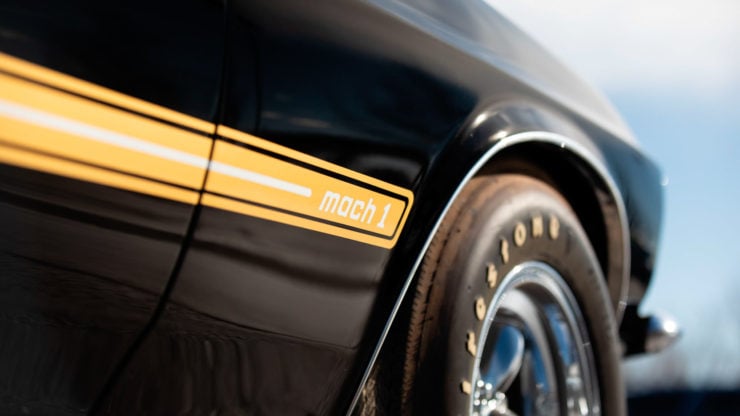 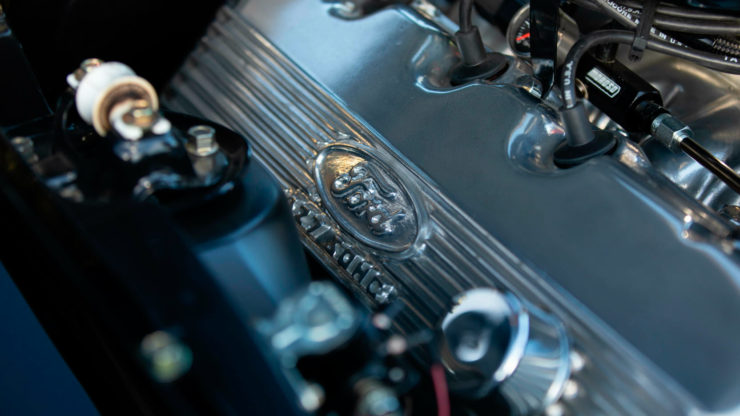 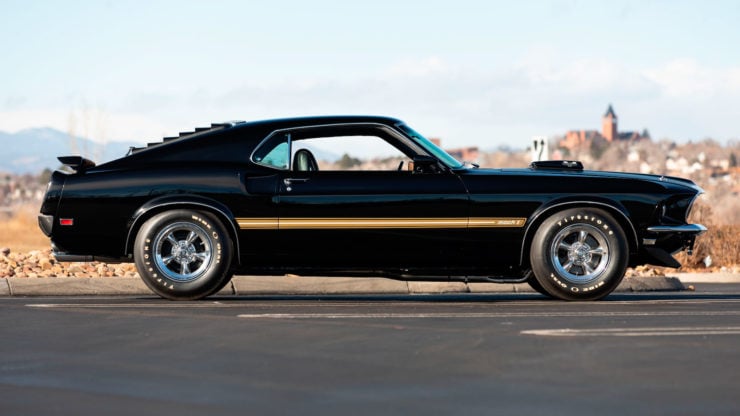 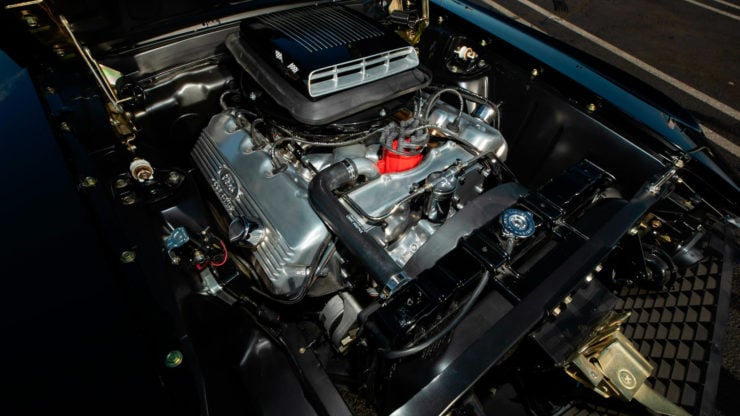 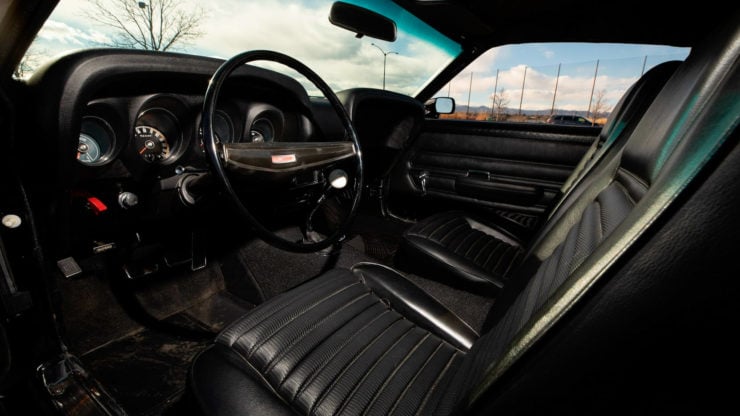 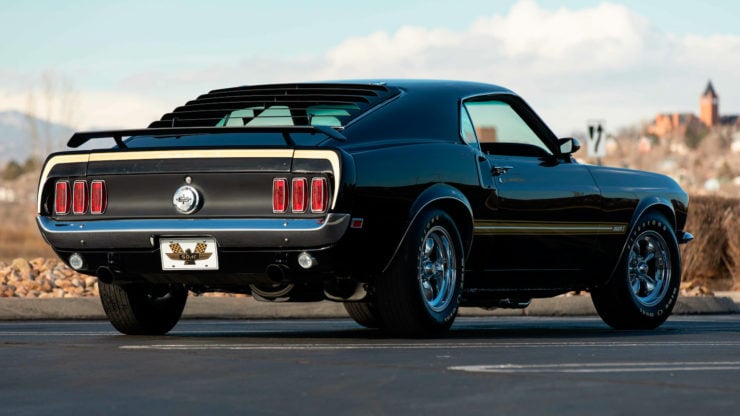 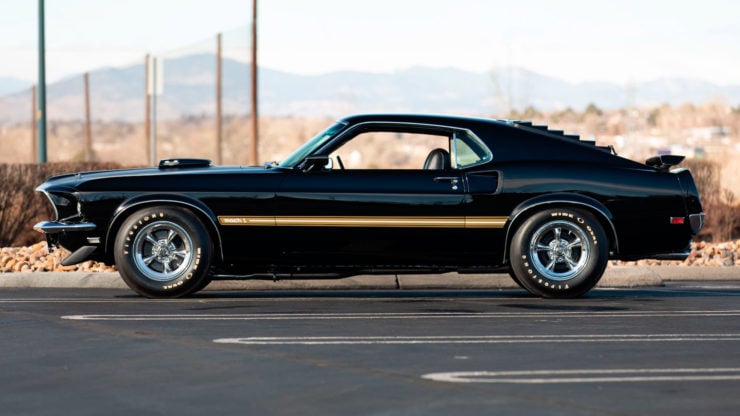