This is an original factory-built Devin C built by Bill Devin and his team in 1959. The cars developed by Devin deserve to be more famous than they are, in period they won 32 SCCA races, the 1956 SCCA H Modified National Championship, and they were six-time Pikes Peak Unlimited Class winners.

There were a slew of other wins and podiums for Devin cars in the 1950s and 1960s, in fact the cars are still racing successfully today against some of the fastest Ferraris, Maseratis, Jaguars, and Aston Martins of the era.

Bill Devin – “The Enzo Ferrari of the Okie Flats”

Though he’s best-known today for the Devin series of sports cars he developed, Bill Devin was also an accomplished, race-winning driver in his own right, and he was a talented amateur engineer who pioneered the use of toothed timing belts for engines. 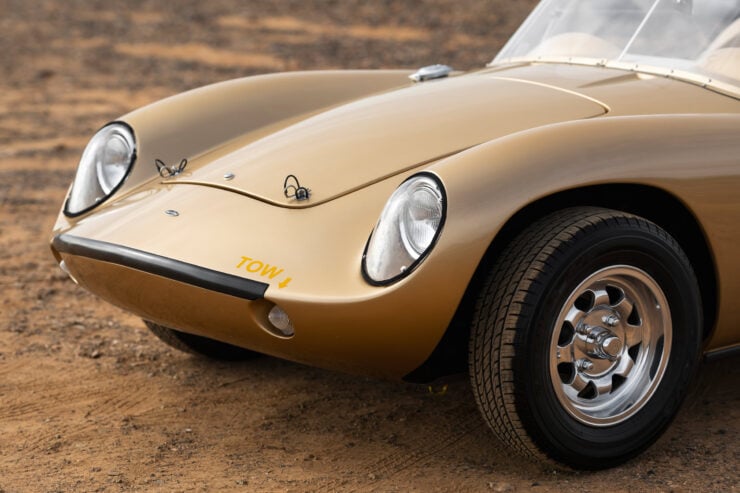 The lightweight fiberglass body was a trademark of all Devin’s sports cars, this one is fitted with a racing specification 180 bhp Corvair engine.

Working with Norton motorcycle racer Don Evans, Devin took the cylinders and heads from two Norton Manx motorcycles and adapted the two-cylinder boxer Panhard crankcase to work with them. He then drove twin belts to operate the overhead cams in the Norton heads.

Sadly he never patented his invention, if he had he would likely have become an exceedingly wealthy man due to the rapid rise popularity of belt driven overhead cams in cars and motorcycles in the decades since.

After buying a small Crosley Hotshot and modifying it to race in 1949, Devin enjoyed immediate success on track as a driver – winning the novice race on his first outing as a racing driver at Buchannan Field.

By 1953 Devin had ordered a Ferrari 250MM with the aim of racing it at the 24 Hours of Le Mans, when he arrived in Italy it wasn’t yet ready so he bought a Ferrari 166MM Touring Barchetta and a  Ferrari 340 America.

He would debut the 240MM stateside in the Sports Car Club of America Madera race – he finished third in the novice event before turning the car over to Phil Hill, who won the main event.

It would be the sale of the 250MM that would change the course of Devin’s life, he took a small front-wheel drive Deutsch-Bonnet in part trade for the Ferrari and though he didn’t know it at the time, the Deutsch-Bonnet would start him off as an automaker in his own right. 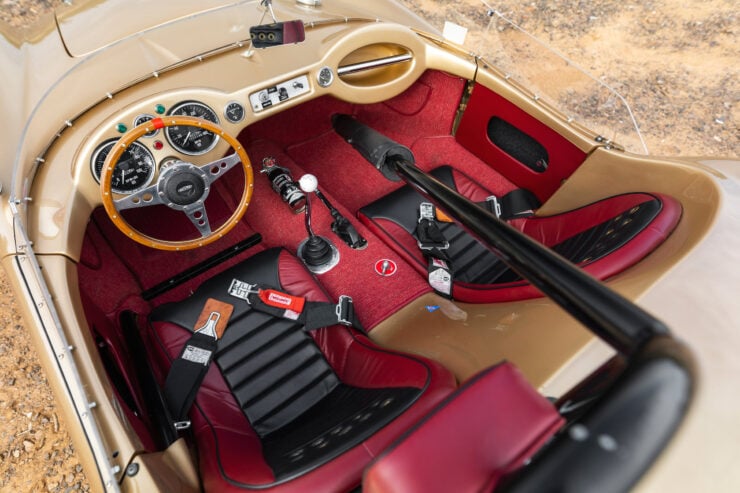 This car is set up for both road and race track use, it can carry a passenger however they need to work their way into the car around the roll bar strut that is braced in their foot well.

He created his first fiberglass mould using the Deutsch-Bonnet body, modifying it and then fitting it to a chassis he designed powered by his unique Panhard-Norton engine with those belt driven overhead cams.

Thanks to his successes with his first Devin-badged car, Bill would develop a slew of cars in the years that followed including the Devin SS, Devin D, and Devin C. Many of these cars were sold as kits or bodies only for people to build themselves, a few were built by Bill Devin and his team – these are the cars that tend to be built to a very high level.

The Devin C you see here was built by Devin in 1959, it’s one of the first of 21 examples built, and shortly after it left the factory it was used by the Granatelli brothers for supercharger testing at the Bonneville Salt Flats.

After this the Granatellis also ran the supercharged car at various Californian drag strips, setting a new sports car record 12.44 second quarter-mile run at 109.75 mph in the process.

Once the supercharger had been removed this car was entered by its first owner into the LA Times-Mirror Grand Prix at Riverside in October 1961 driven by Pete Woods. 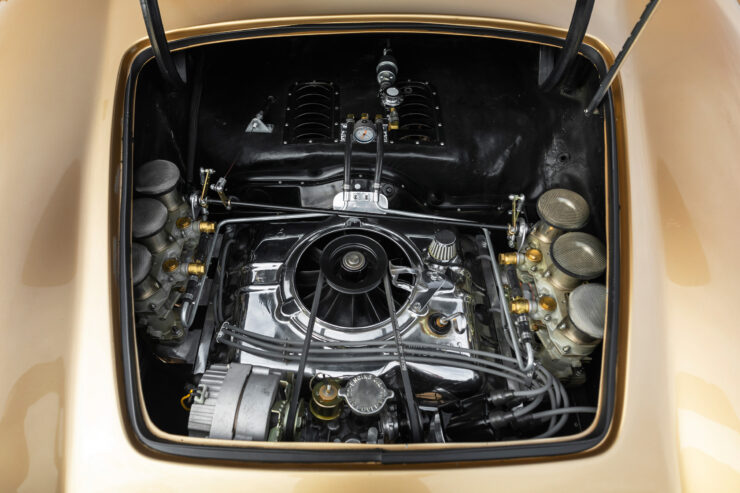 This is a flat-six Chevrolet Corvair engine that has been built for performance, it now turns out 180 bhp, enough to make the lightweight Devin C a rocketship in the right hands.

Sadly the engine seized before the main event, bringing Woods’ afternoon to an abrupt halt.

In the years after this, this car passed through a number of hands until it ended up with Phoenix-based Corvair specialist Tom Schrum in 1993. Schrum undertook a full restoration on the car, with the bodywork being taken care of by specialist John Lee.

Schrum became ill in 2012 and the car needed to be sold on to have the restoration completed, Bud Bourassa took on the car and completed the restoration incorporating a few minor changes which included a conversion to disc brakes, installation of a wraparound windscreen, covered headlamps, different taillights and gearshift, and a MOPAR gas cap.

The car is now fitted with a racing specification Corvair engine with forged pistons and Weber 40 IDA carburetors, capable of 180 bhp.

The car is now being offered for sale by RM Sotheby’s on the 27th of January with a price guide of $70,000 – $90,000 USD. If you’d like to read more about it or register to bid you can click here to visit the listing. 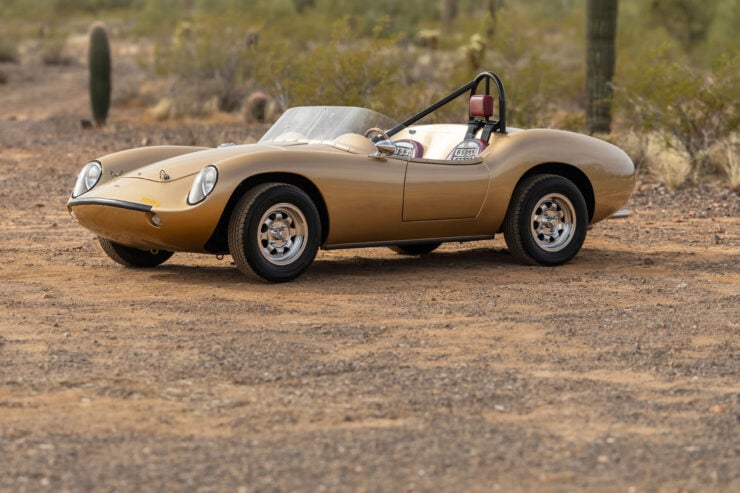 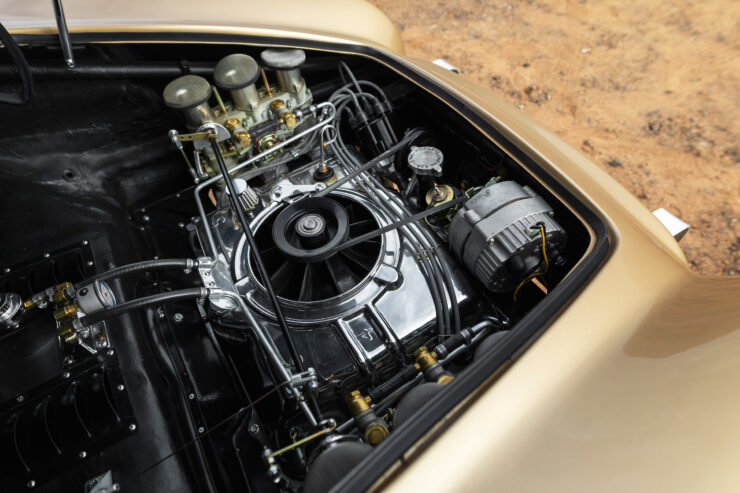 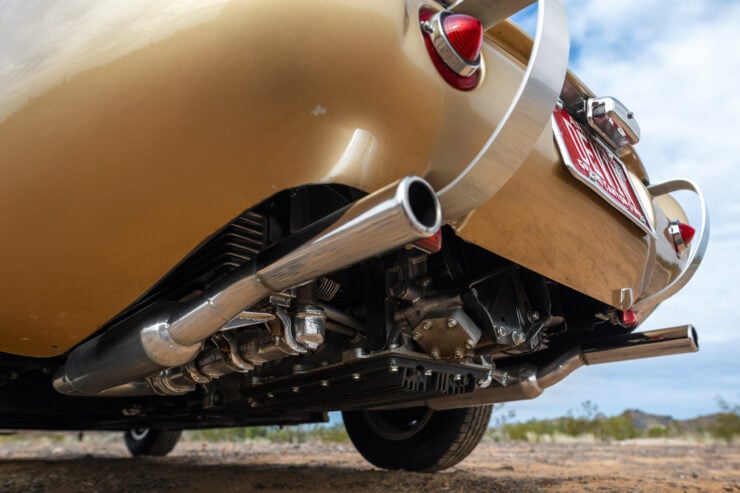 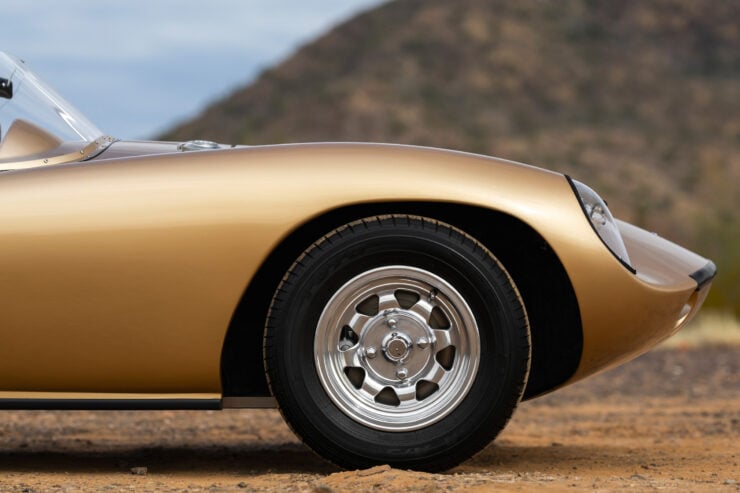 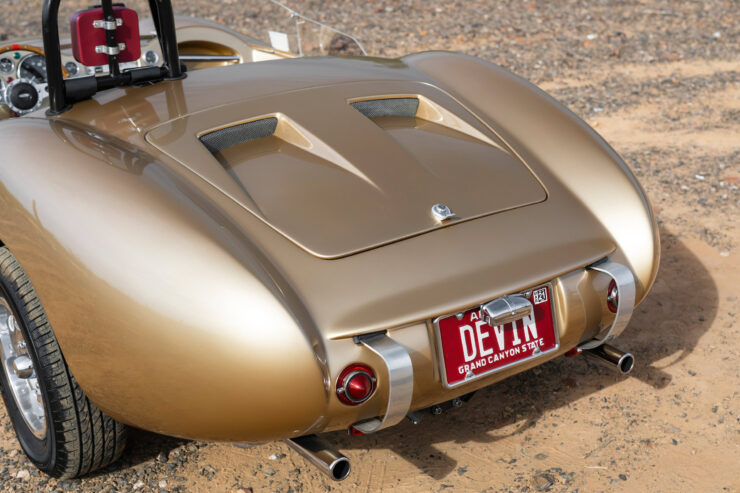 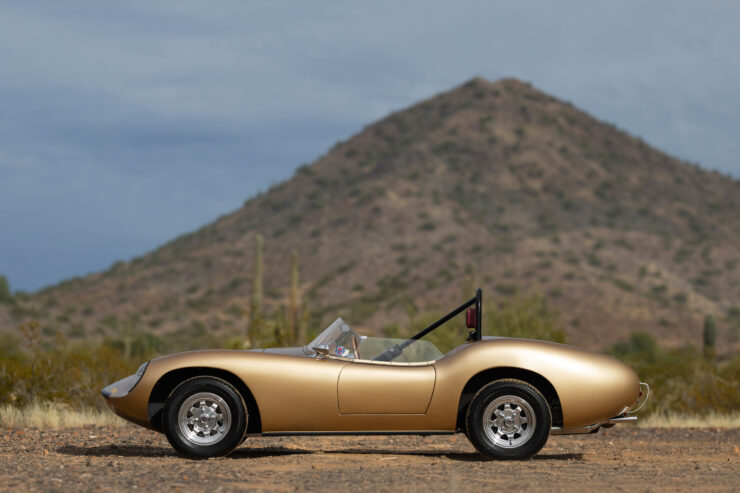 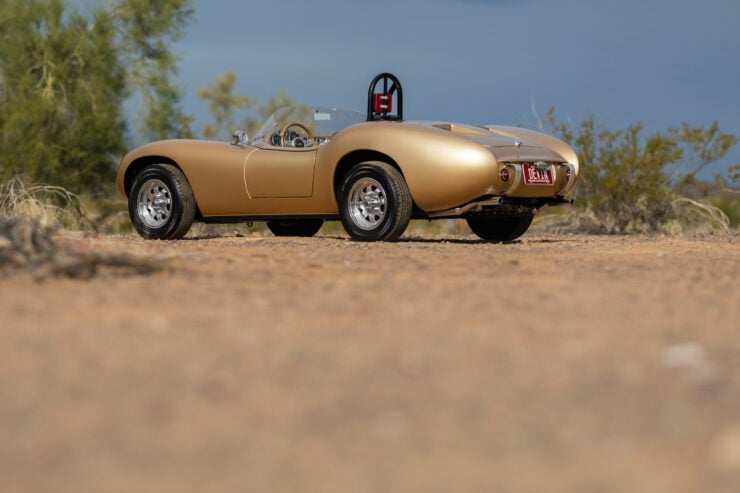 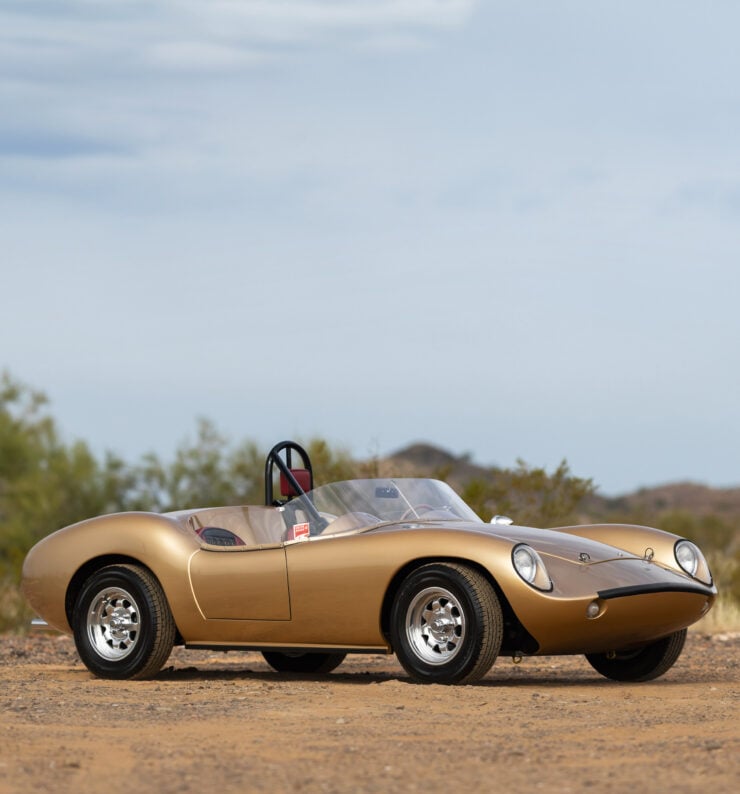 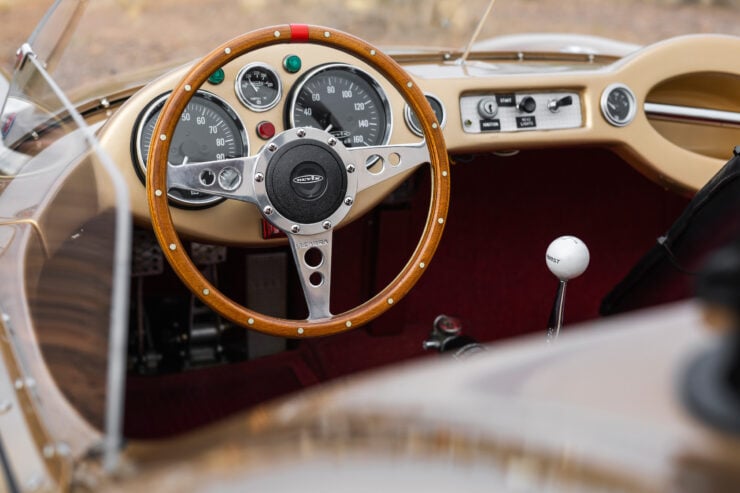 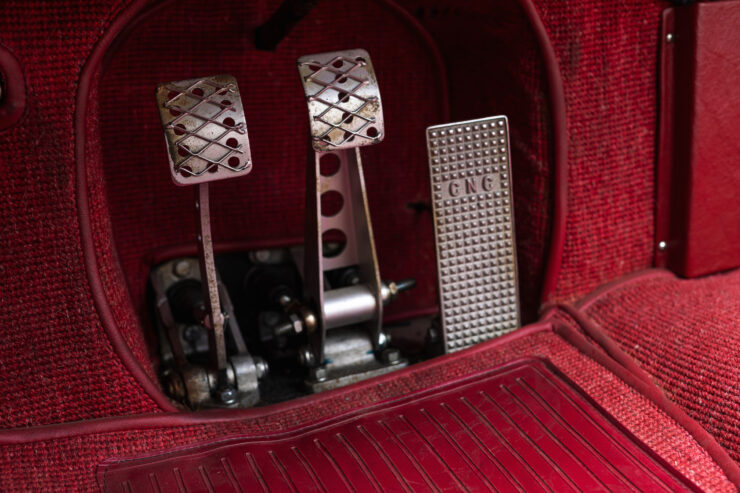 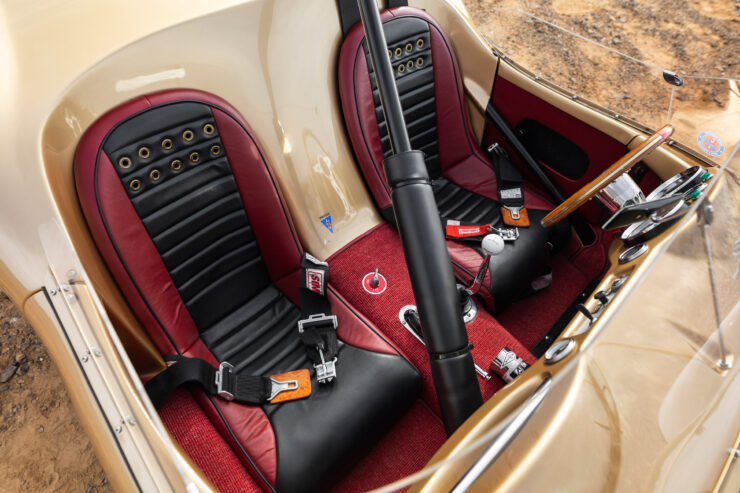 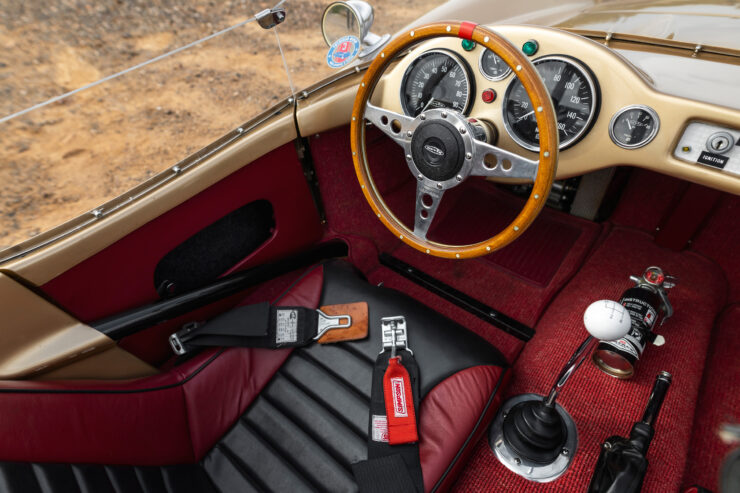 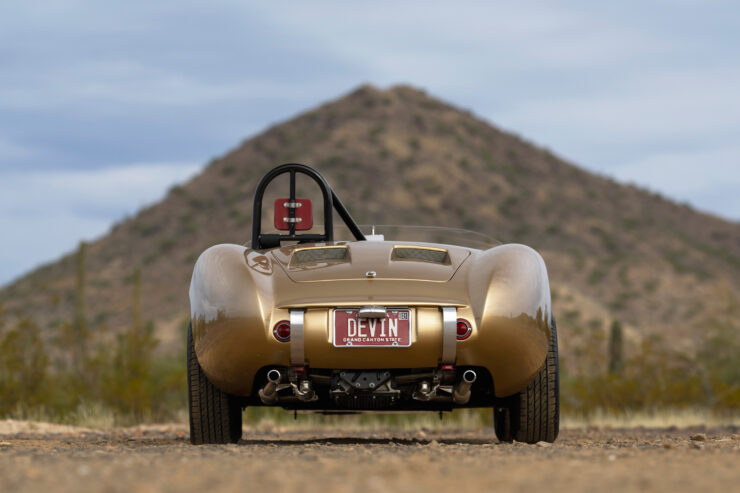 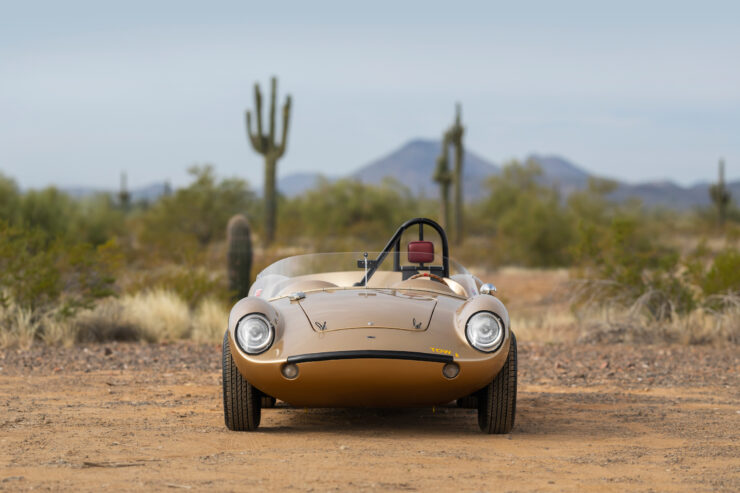 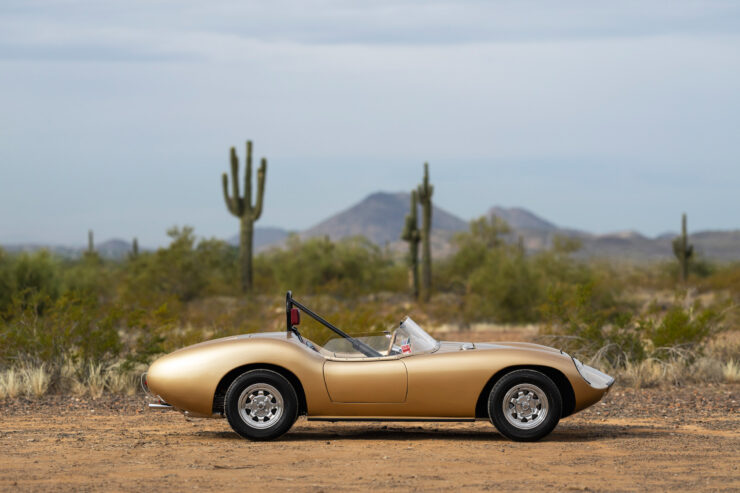 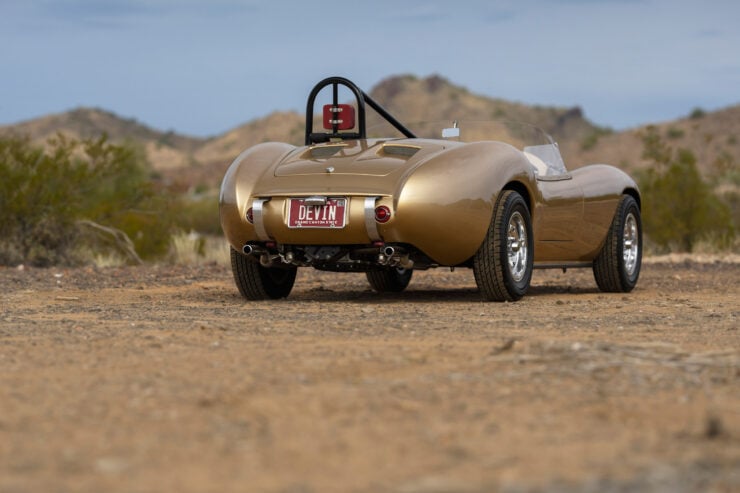 The post A Rare American Giant Killer From 1959: The Corvair-Powered Devin C appeared first on Silodrome.