This 1963 Toyota Land Cruiser has been through a comprehensive nut-and-bolt rebuild at the hands of Icon in California, the world’s preeminent FJ40 specialists who have worked closely with Toyota on a number of projects including the FJ Cruiser production vehicle.

Most of Icon’s FJ40 builds are powered by the General Motors LS V8 however the vehicle you see here has been fitted with a turbocharged International HS 2.8 liter diesel inline-four cylinder engine, which offers excellent torque at almost 300 lb ft with better mileage than the gasoline-fueled LS V8.

The Land Cruiser has come a long way since it was first introduced in 1951 as the Toyota “Jeep” BJ series.

Toyota had first been tasked with developing a Jeep-like 4×4 during WWII when Imperial Japanese Army soldiers discovered an American Willys Jeep in the Philippines, the usefulness of such a vehicle was clear so it was sent back to Japan to be reversed engineered. 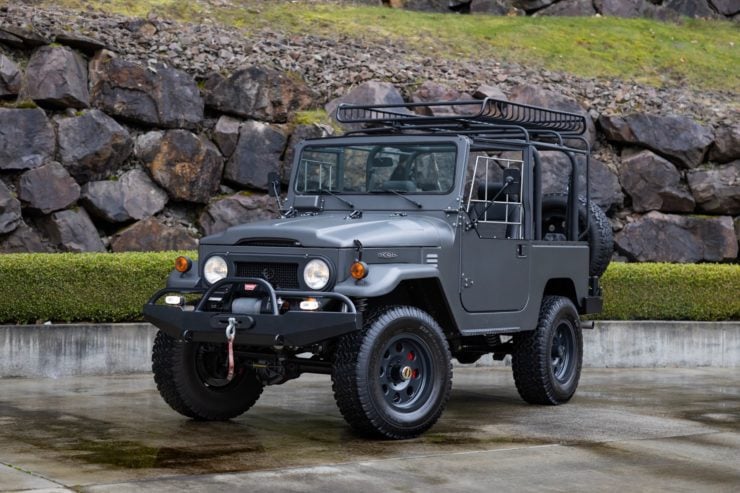 Each Icon FJ40 is totally rebuilt and significantly modified to make them highly capable daily drivers, with modern drivetrains for reliability and added power.

A few years later in 1950 the Japanese were now on the same side as the Americans who were fighting the Korean War. The United States government ordered 100 Jeep-like 4x4s from Toyota, kickstarting the series that would be renamed “Land Cruiser” in 1954 due to Jeep getting (understandably) a little testy about their use of the brandname.

Over the intervening decades over 10 million Land Cruisers have been built, they’ve developed a reputation for toughness and reliability, and modern versions have shaken off the rust issues that tended to plague the steel bodies of earlier models.

Today the early FJ40 models and their BJ40 series siblings are in high demand with collectors and enthusiasts as vintage four-wheel drives continue to grow into a major sector in the classic car world.

By modern standards many of these early four-wheel drives can seem a little agricultural, this is where Icon comes in, offering a full modern drivetrain, uprated suspension and brakes, a fully rebuilt chassis and body, and an interior that’s almost luxurious by the standards of the original vehicles.

The 1963 Toyota Land Cruiser FJ40 you see here has been given the full Icon nut-and-bolt rebuild, it’s now perfectly suited to use either as a daily driver or a weekend adventure wagon. 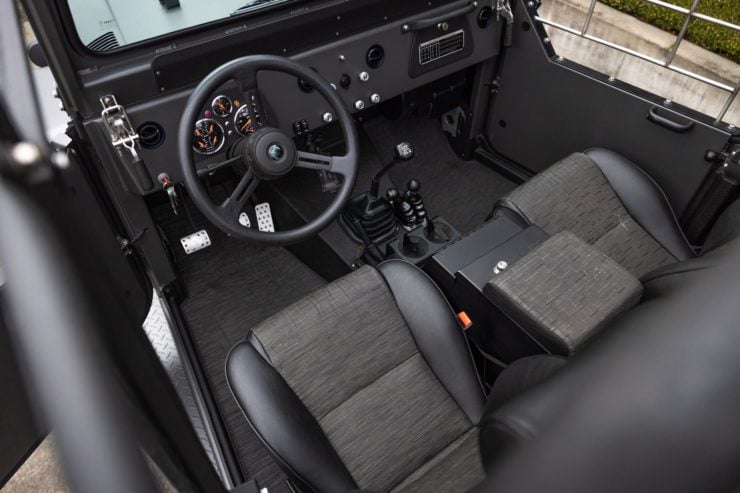 The interior keeps the spirit of the original but includes features like a hidden Alpine stereo with SiriusXM satellite radio and an amplifier, much improved seats, and smaller luxuries like cup holders.

The bodywork has been powdercoated in Rocky Mountain Grey, the cabin has been trimmed in black leather with grey textured Chilewich textile seat centers and matching carpet. A modern Alpine stereo has been fitted, as well as SiriusXM satellite radio receiver, and an integrated amplifier.

For inclement weather protection the vehicle has been given an insulated double three-ply folding soft top, and it’s fitted with Hella halogen headlights, front and rear auxiliary lights, and a Warn winch is integrated into the front bumper.

The drivetrain consists of a turbodiesel International HS 2.8 liter inline-four cylinder engine producing approximately 135 bhp and 277 lb ft of torque. Power is sent back through a five-speed manual gearbox and transfer case to live front and rear axles with locking differentials.

This Land Cruiser now rides on coil over suspension in place of the original leaf springs, it also has four-wheel disc brakes, powdercoated alloy wheels, and on onboard air compressor.

This Icon FJ40 is currently being auctioned live online by Collecting Cars, if you’d like to read more about it or register to bid you can click here to visit the listing. 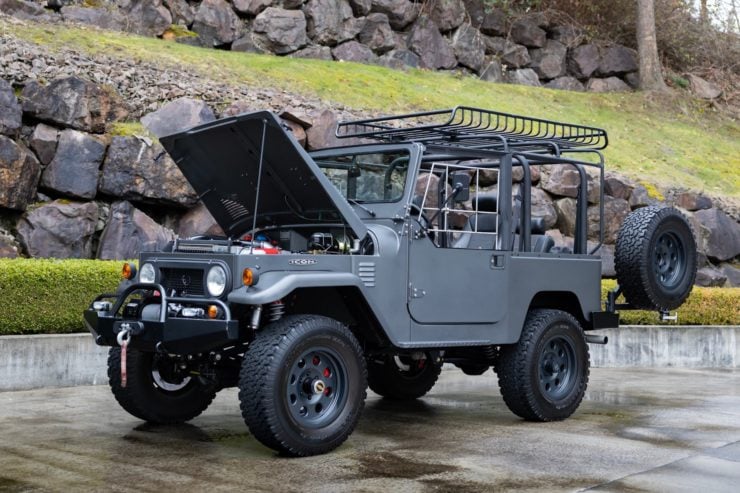 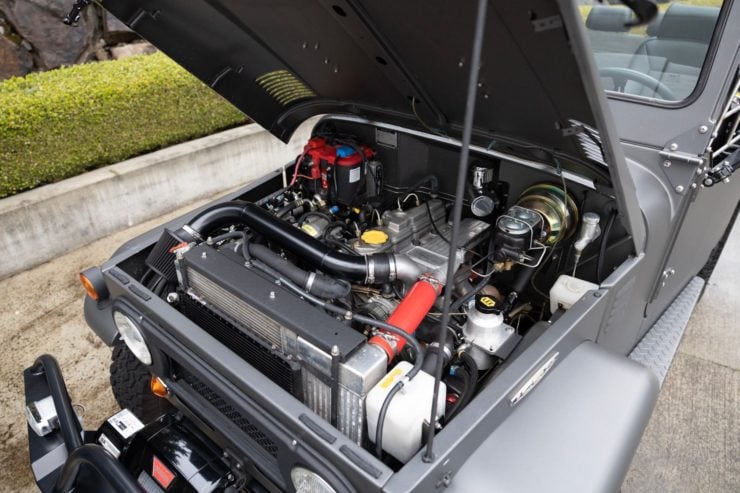 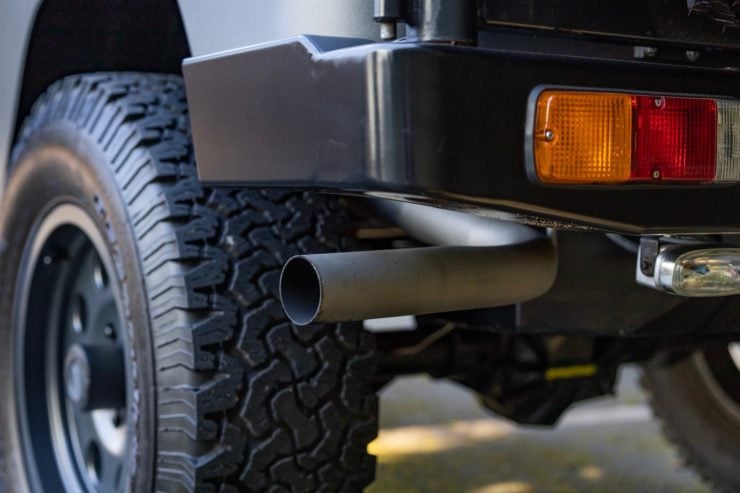 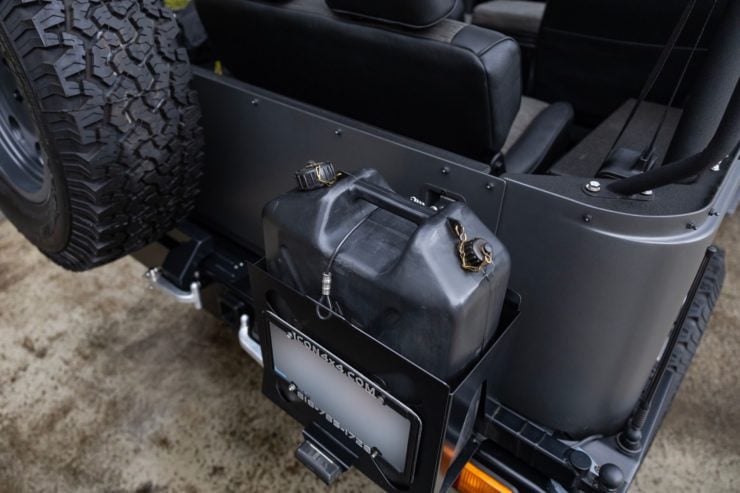 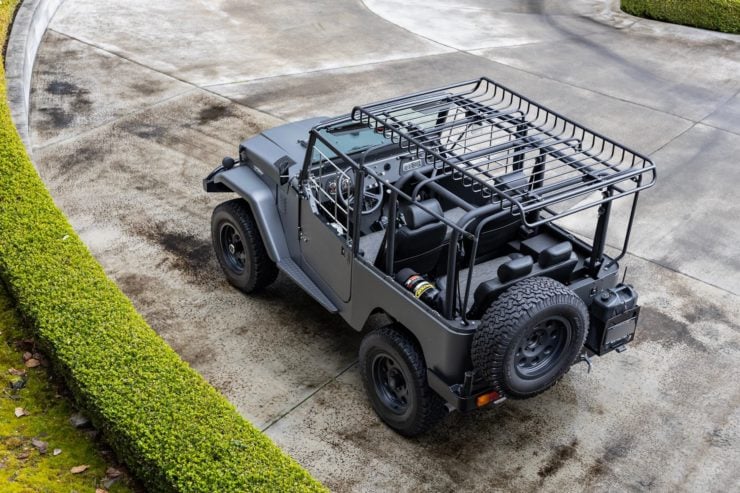 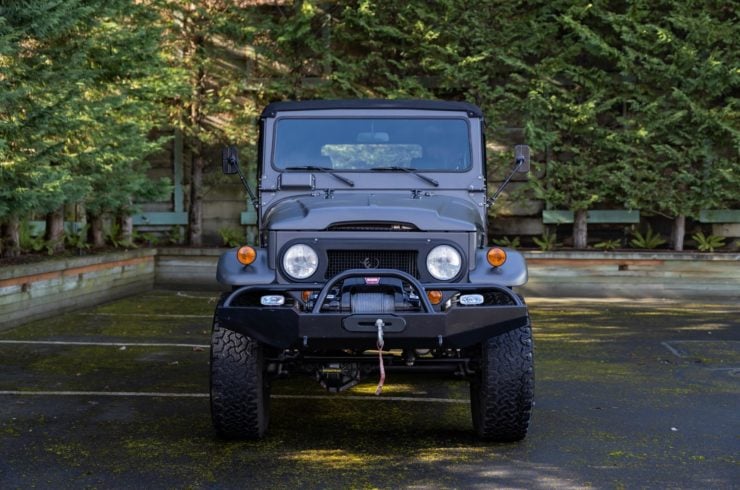 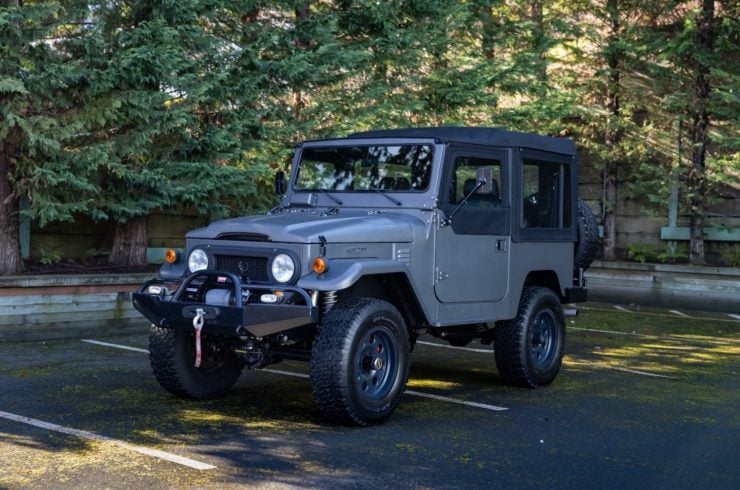 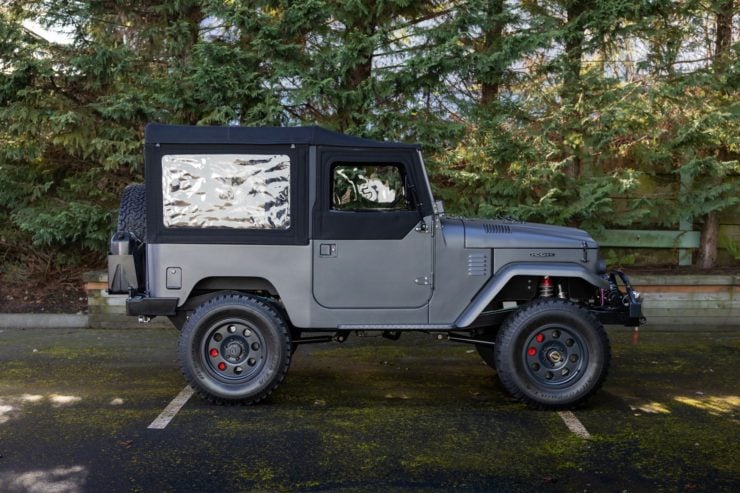 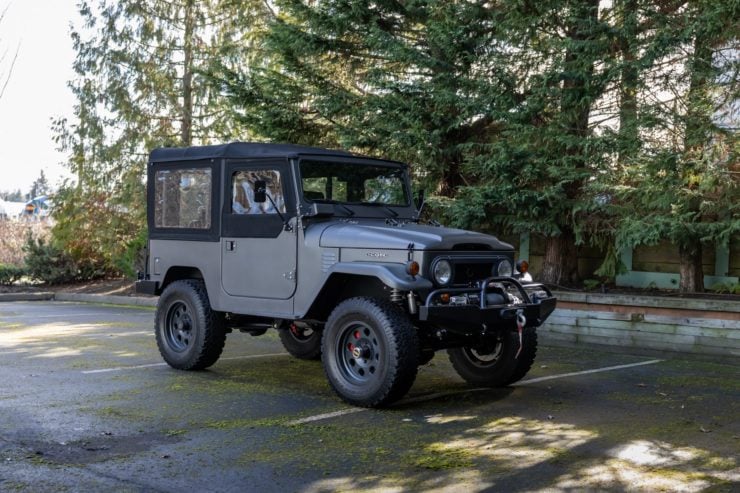 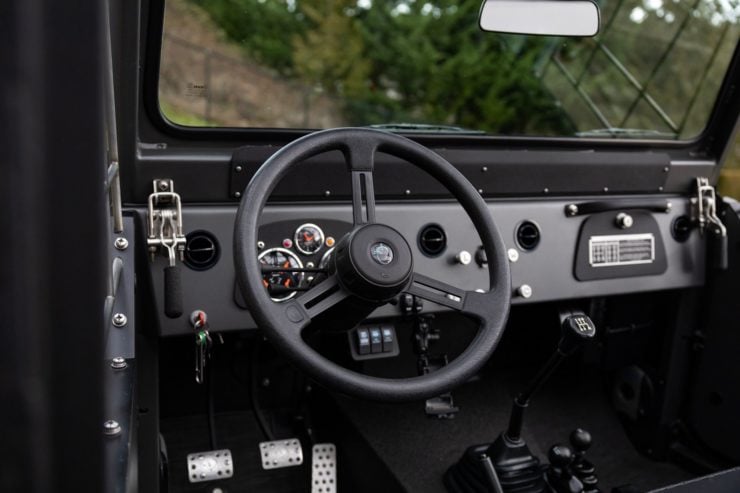 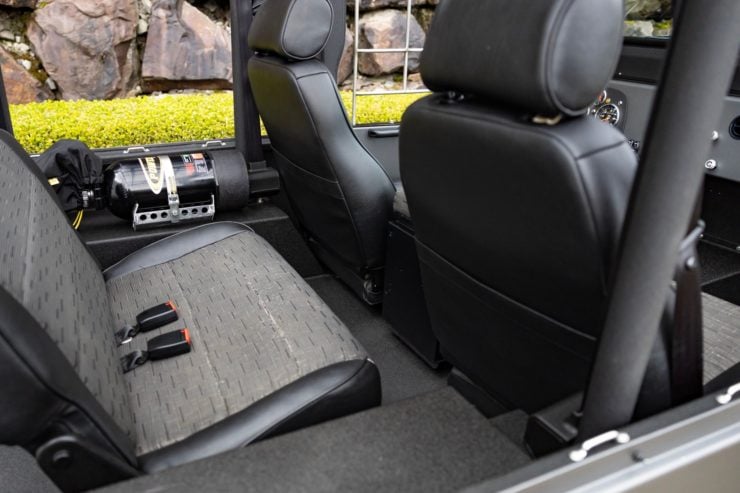 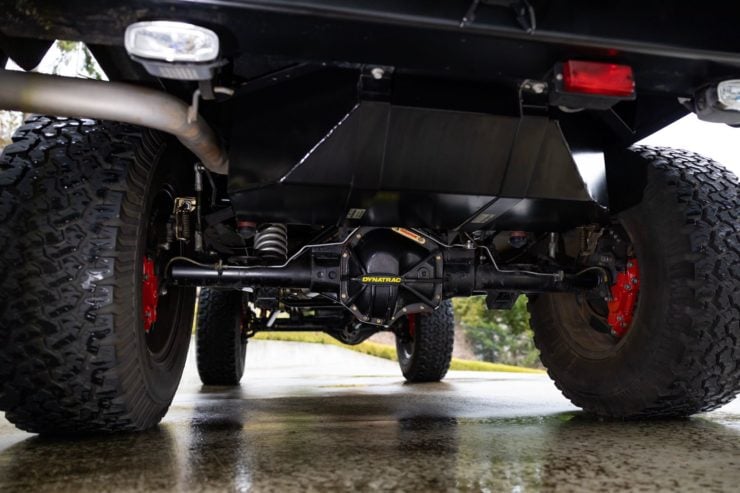 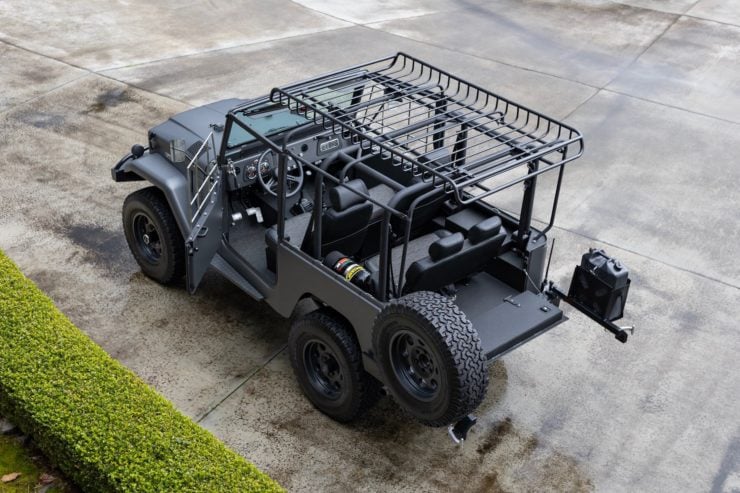 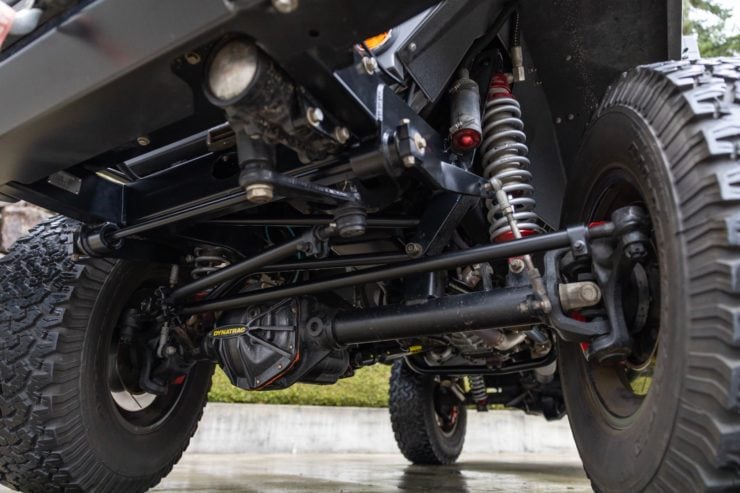 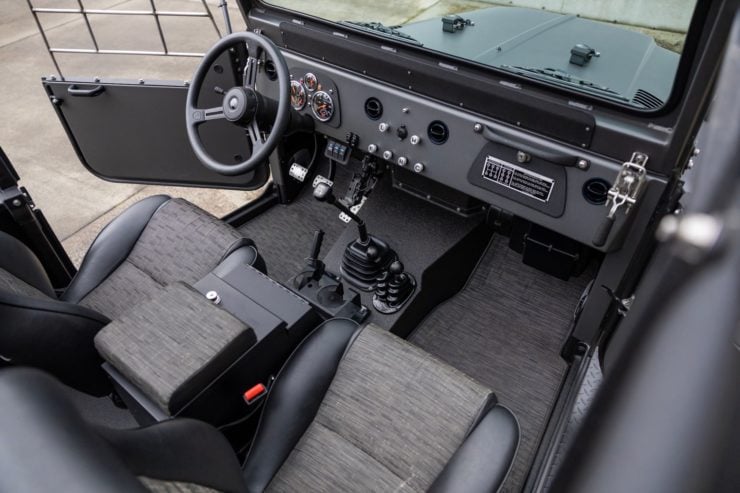 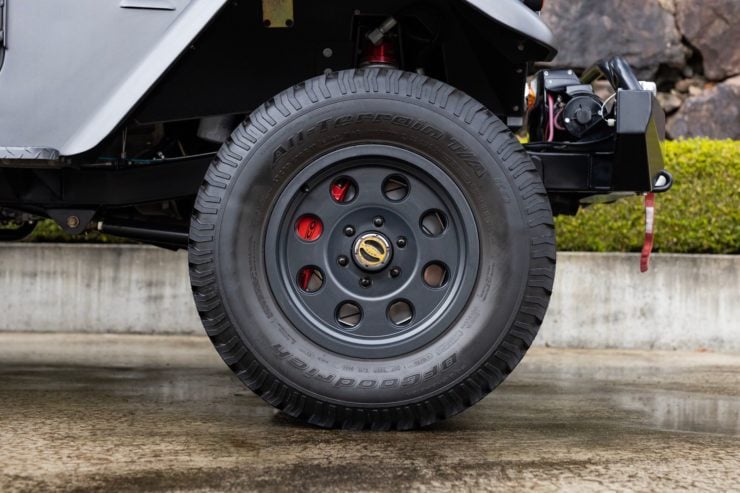 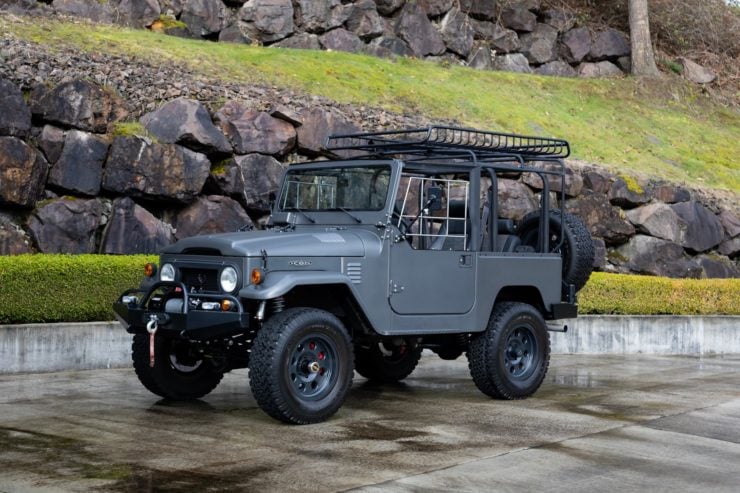 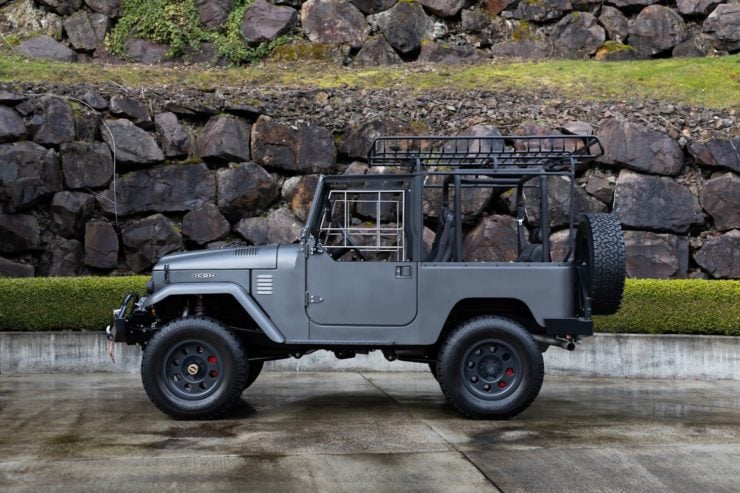