Indian Actor Sonu Sood is often called a real life hero for his charity works and the help that he offered to migrant workers during the first wave of pandemic. He offered tickets and arranged other modes transport for migrant workers who were stranded in different parts of the country. The actor has won the hearts of many for this work during the pandemic. Now, a video of the actor Sonu Sood has surfaced online where he is seen carrying a teen in his arms who was involved in a road accident.

The video has been shared by Sood Charity Foundation on their official Twitter account. The accident happened in Punjab’s Moga district warlier this week. In the video that went viral on social media. The actor is seen helping a 19-year old boy who was involved in an accident. The accident happened on a flyover and the actor happened to be passing through the route when this happened. The actor immediately approaches the car and tries to unlock the driver side door to get the boy out. It looks like the driver side door got jammed after the accident.

The actor approaches the co-passenger door and could open it without any problem. The actor is then seen trying to get the boy out from the driver seat. The boy has gone unconscious after the accident and that made things a bit more harder. He somehow managed to pull the boy out of the car and the 48 year old actor carries the injured boy to his own car in his arms. 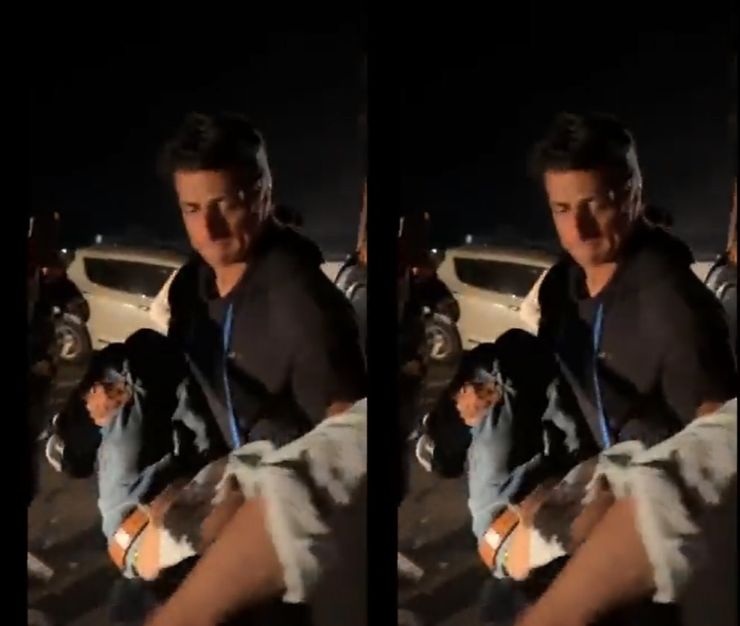 The actor then takes him to the nearest hospital. According to reports, the doctors stated that if the actor had not offered timely help to the boy, then things might have turned fatal. Sonu Sood’s fans have been sharing this video online and have been praising the actor for this act. The video does not share how exactly the accident occured. In this video, a Maruti swift Dzire and a previous generation Swift hatchback can be seen on the flyover. The video also does not mention about the condition of the people who were travelling the other car. It looks like they might have escaped the accident with only minor injuries. It is also not known whether the 19-year old boy was alone in the car or not. The actor is seen carrying the 19-year old boy in a Ford Endeavour SUV. when it comes to cars, Sonu Sood has a decent looking garage.

The actor owns cars like Porsche Panamera, Audi Q7, Mercedes-Benz ML-Class, Maruti Zen and an old Bajaj Chetak scooter. There was a rumour in between that the actor had gifted his son a Mercedes Maybach GLS600 SUV worth Rs 3 crore. The actor late came forward saying that he had not bought the 3-crore SUV. Sonu Sood was known for playing villain characters in several Indian movies. When he started helping people during the pandemic, people started praising and calling him Real life hero. Many political leaders and famous personalities have praised him for his selfless acts.

Also read: Oppo to launch electric vehicle in India by 2024

The post Actor Sonu Sood carries a 19 year-old injured in a road accident in his arms first appeared on Cartoq.Cartoq Read More