The Barrister Custom was a limited production car built by George Barris, based on the C3 Corvette. Though divisive, the styling did attract a slew of celebrity buyers including James Caan, Bo Derek, Sammy Davis Jr, and even Liberace.

The name George Barris may already be familiar to you as he was one of Hollywood’s leading car customizers, he designed and/or built a vast array of film and TV cars – Kitt from Knight Rider, The Beverly Hillbillies car, the “Striped Tomato” Torino from Starsky and Hutch, the Dukes of Hazzard car and many more.

When George Barris was a seven year building wild car models with his brother Sam no one could have predicted that the pair of them would go on to create some of the most enduringly famous custom cars in American cinema and television history. 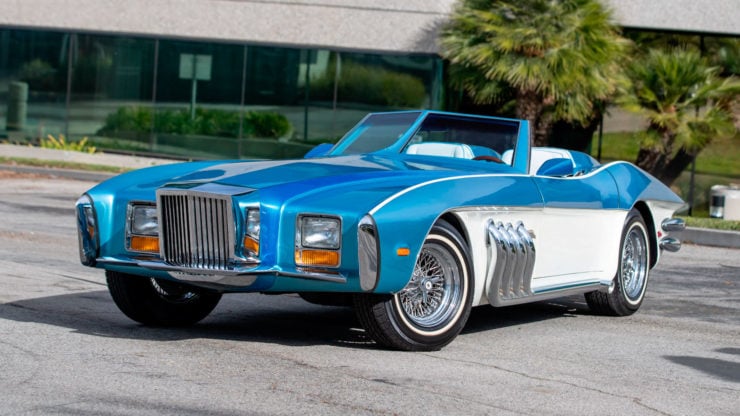 Very few would be able to tell that this car is based on the third generation Chevrolet Corvette, the original lines of the car are almost entirely gone, only referenced in the doors and rear fender curves.

After the tragic death of their mother in Chicago when they were just three and two years old respectively, their father sent them to live in California with their uncle and aunty. As they grew the two boys helped at the family’s Greek restaurant, receiving a 1925 Buick in part payment for their help.

This car would become the first Barris Kustom, over the following years George would develop, design, and build some of the most memorable vehicles ever to appear in films and television, becoming the de facto Hollywood custom car supplier for decades.

The Barrister Custom was developed as one of Barris Kustom’s limited production cars, no two of them are the same and no one can quite agree on how many were made – it could be six, seven, or perhaps twelve. 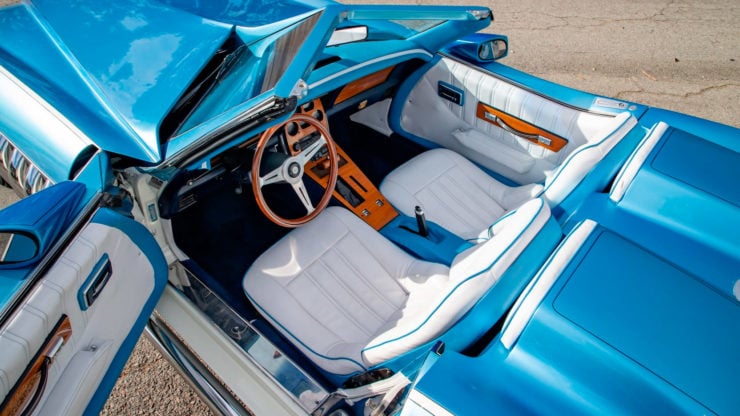 Though the exterior is vastly different, the interior is largely the same. It’s been retrimmed and some new wood panelling has been added however.

Each car started the same way, on a lengthened third generation Corvette (C3) chassis. The original fiberglass Corvette body was removed and heavily modified into a new fiberglass body that featured somewhat outlandish styling that has been compared to the similarly neoclassical Stutz Bearcat II.

Custom cars built by Barris are famous for their ostentatious styling and the Barrister is certainly no exception, the protruding grill and front fender leading edges lead back to a split windscreen over a pair of faux side pipes.

The rear of the car is characterized by a high chrome bumper and jet age inspired brake lights. The interior is largely the same as the original Corvette, albeit with new additions, upholstery, dashboard wood, and a Nardi steering wheel. Interestingly the car does have a custom folding fabric top for weather protection.

Thanks to the Corvette chassis and drivetrain the car is powered by a 350 cubic inch V8, it has four wheel independent suspension, a four-speed automatic transmission, and four-wheel hydraulic ventilated disc brakes. 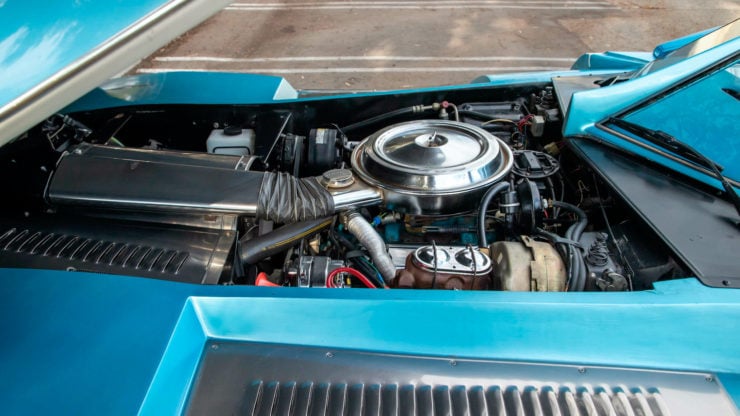 As mentioned above, these cars were ordered new by a number of celebrities including James Caan, Bo Derek, Sammy Davis Jr, and Liberace, giving each of them a rather eye-catching alternative to the common luxury convertibles driven by many of their contemporaries.

The car you see here is based on a 1969 Corvette, though the actual year it was customized by Barris isn’t listed. Is it noted that this vehicle has won several car show and cruising awards including at the Hot August Nights event.

This Barrister was build specifically for Barris’ close family friend Frank Monteleone and it was just the second one made. It’s finished in a two-tone blue over white paint scheme and it comes with a matching dark blue folding top.

We almost never see original Barristers coming up for auction so it’ll be interesting to see what this one sells for when the hammer falls.

It’s due to roll across the auction block with Mecum in mid-March – if you’d like to read more about it or register to bid you can click here to visit the listing. 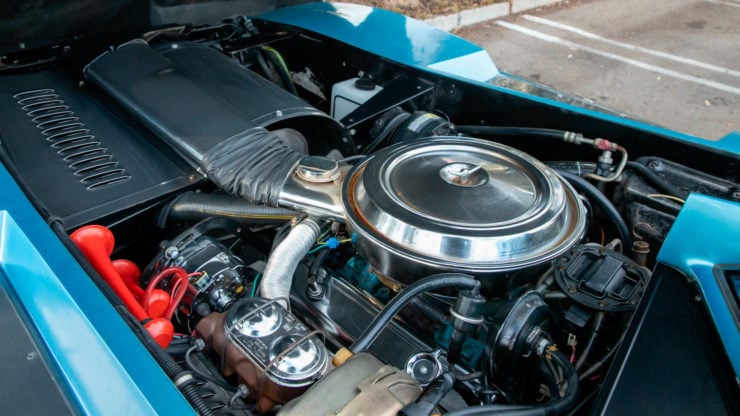 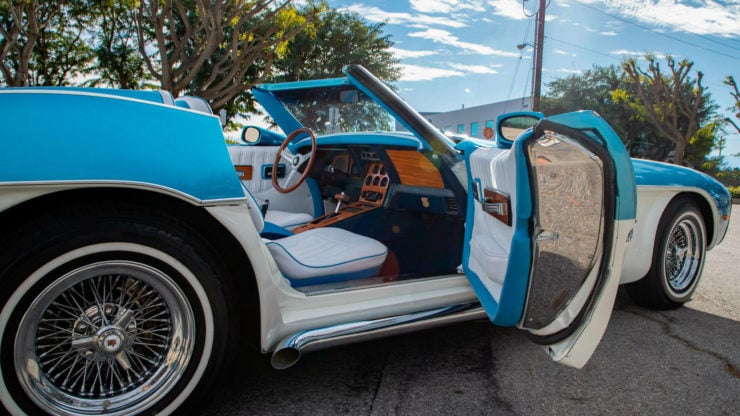 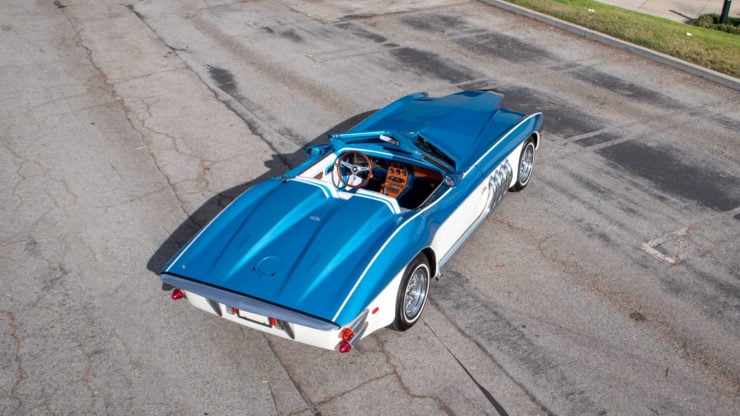 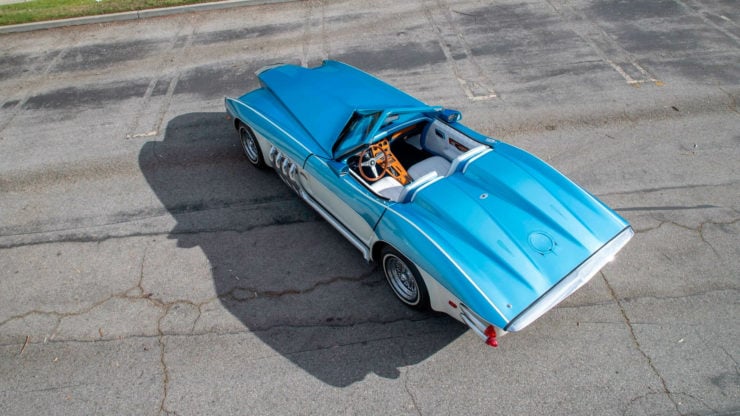 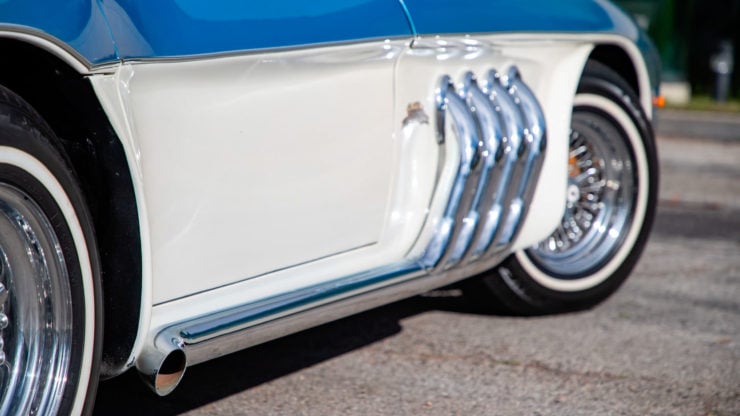 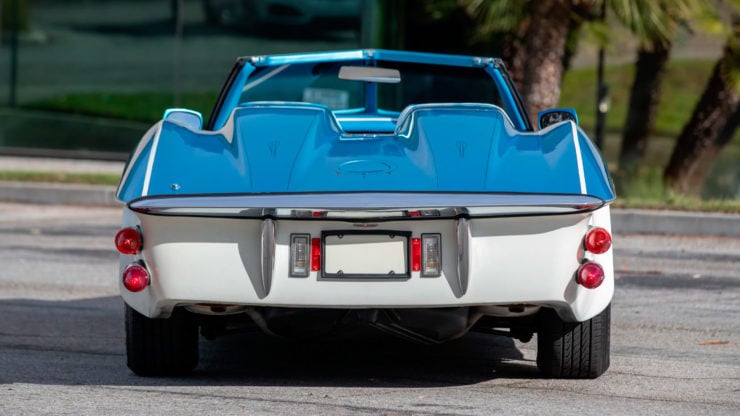 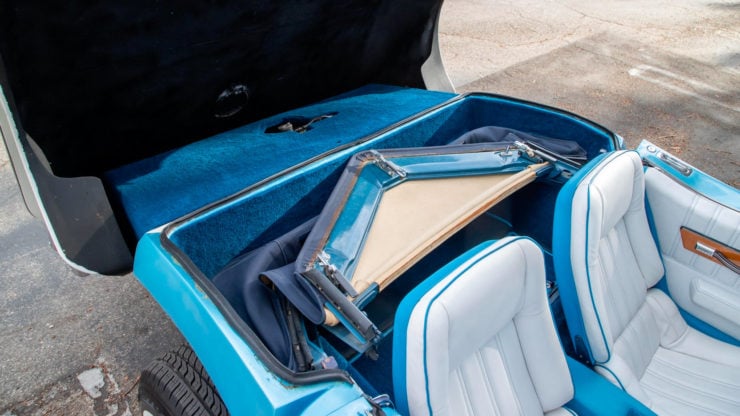 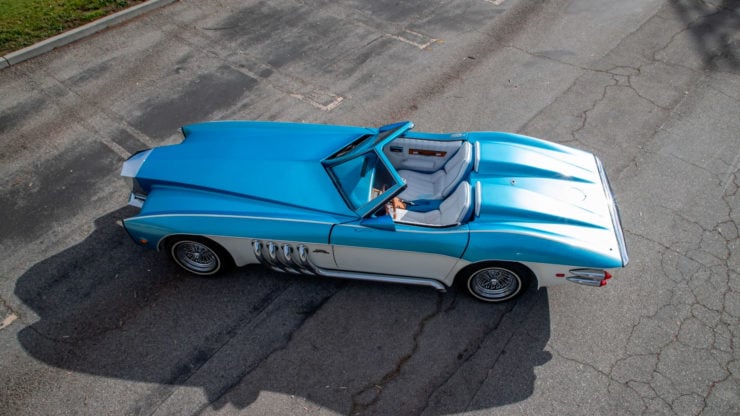 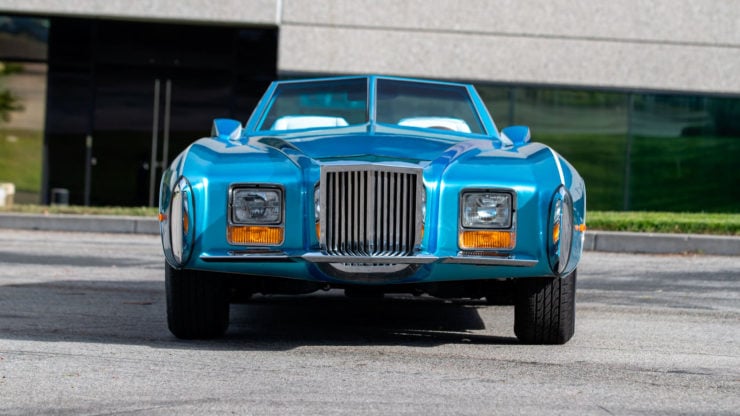 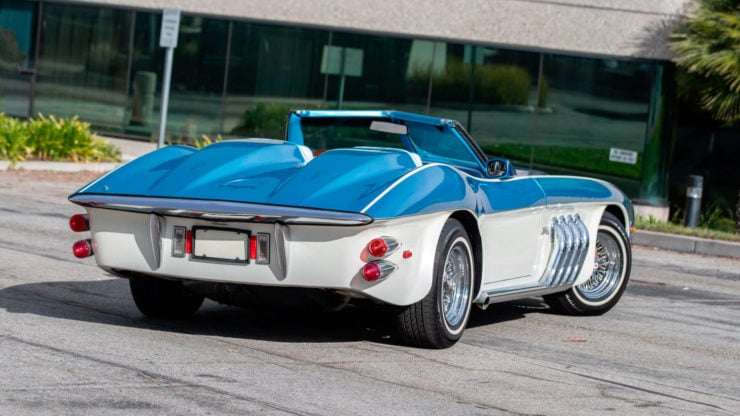 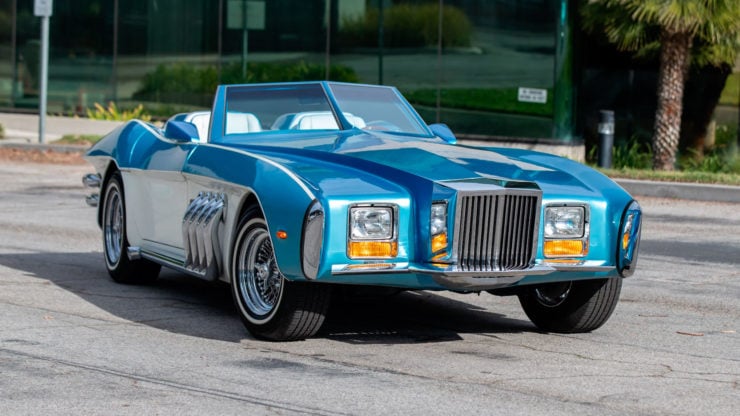 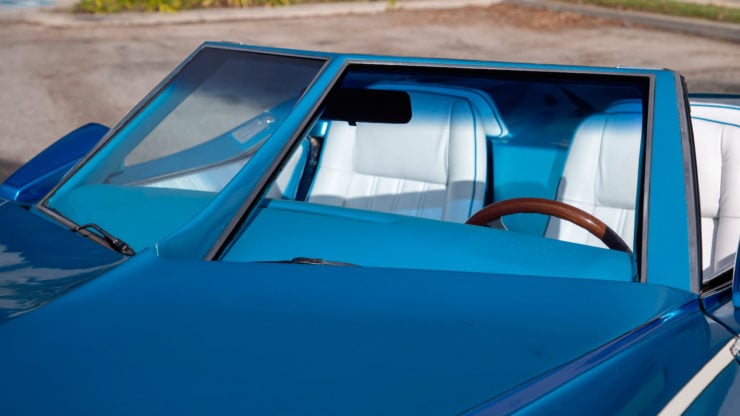 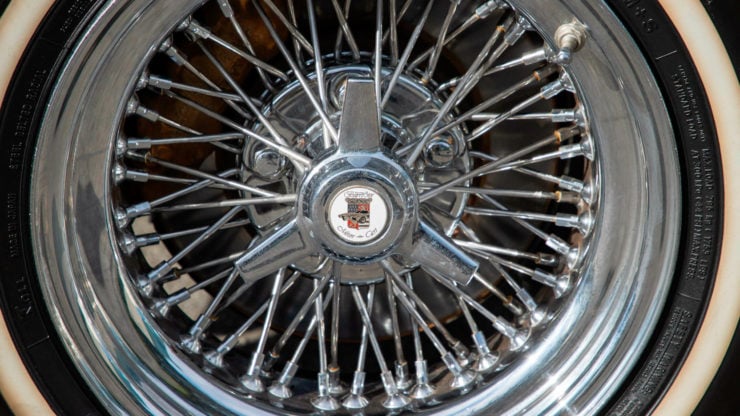 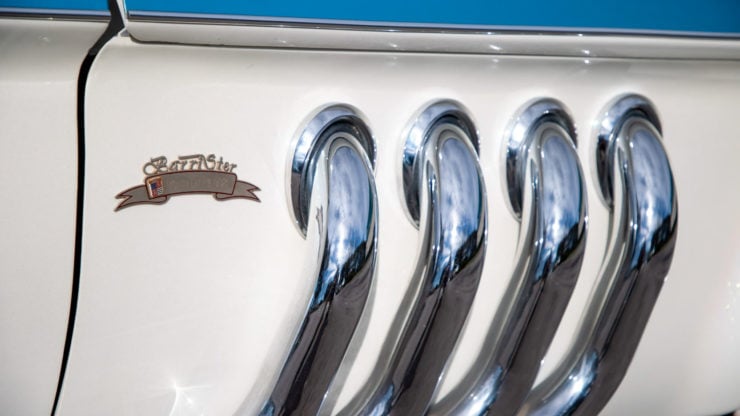 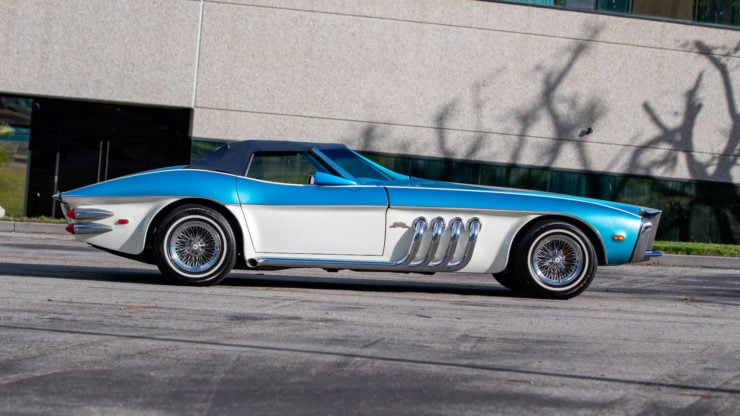 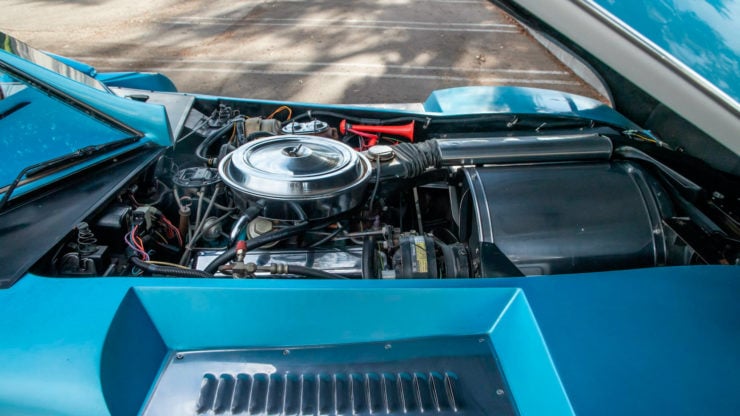 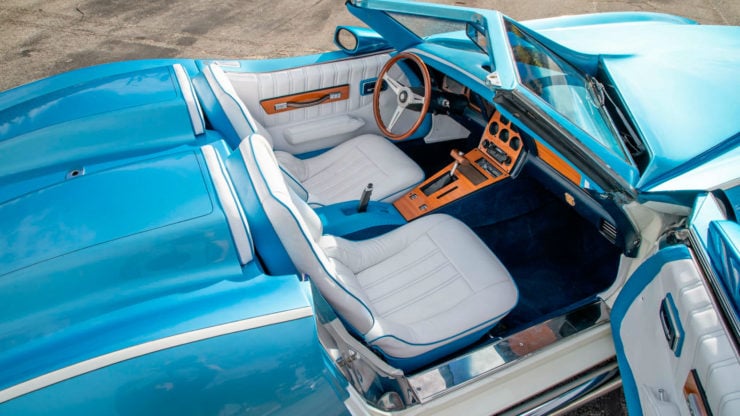 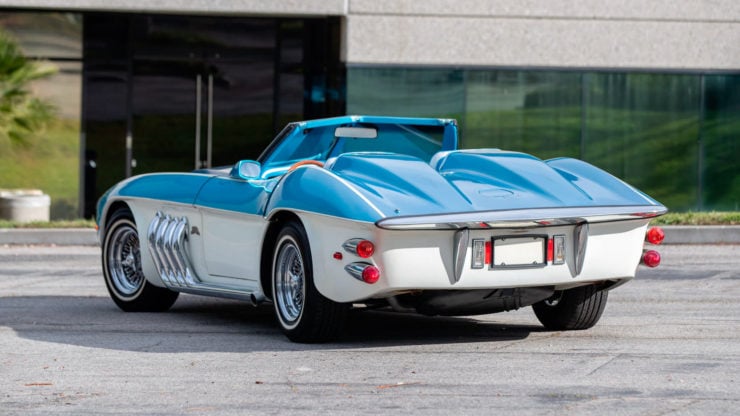 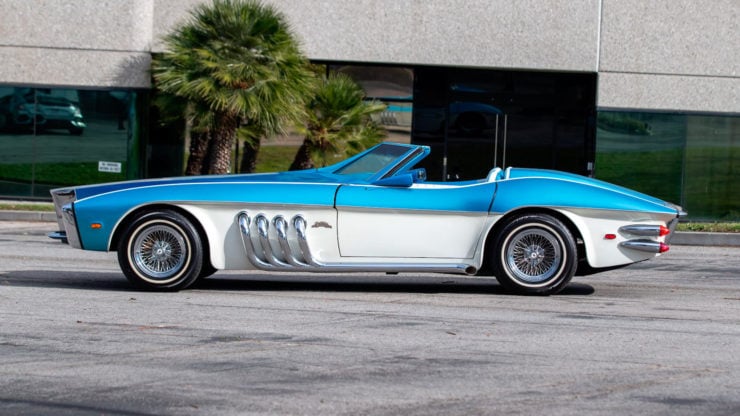 The post An Unusual C3 Corvette Redesigned By George Barris: “The Barrister” appeared first on Silodrome.