The Harrier has been incredibly successful for Tata Motors. It has to compete in one of the most competitive segments in the Indian market. Currently, the biggest hit in the mid-size SUV segment is the XUV700. However, here is an Army Major who bought a Tata Harrier over Mahindra XUV700.

The video is uploaded on YouTube by Fuel Injected. In the video, we can see the owner of the Harrier, he is an Army Major. He shares how his experience has been with the Tata Harrier and also gives the reason for opting for the Harrier over Mahindra XUV700. The owner got the Dark Edition of the Harrier which has its own fan following. The special paint schemes by Tata Motors have been quite successful.

Army Major had an eye on the Harrier since it was first launched in the Indian market. He was planning to buy the SUV for quite a long time. He finally bought the SUV in 2021. Because of his job, he has to travel a lot. He already has more than 5,000 km on his odometer. 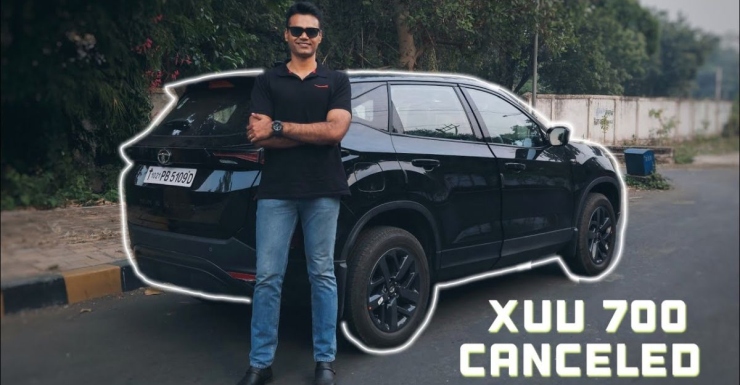 The reason behind choosing the Dark Edition of the Harrier over the XUV700 is that the SUV was readily available for delivery. When he booked the Harrier, Mahindra had not announced the delivery dates of the XUV700. Moreover, everyone knew that the waiting period of the XUV700 was going to be quite long. Also, the owner was looking for a 5-seater SUV only and Harrier just made more sense to him.

He chose the Dark Edition because the rest of the cars at his home are white in colour. He found the Dark Edition to be quite attractive. He was posted in Jammu when he booked the SUV. However, the delivery of the Harrier was taken from Punjab. So, he had to drive the new Harrier from Punjab to Jammu. Since then, he has driven the SUV to various states of India.

According to him the ride comfort and the highway stability is good and his wife also agrees to this. Till now, he has not faced any issues with the SUV. Because it is the Dark Edition, the cabin is also finished in black colour with black upholstery. This tends the interior to warm up easily so he thinks that ventilated seat function would have been great. Fortunately, now you get the Harrier with ventilated seats. Another gripe that the owner has is the poor quality of the rearview camera and the infotainment system could be improved because it can be a bit laggy.

The owner also talks about the fuel efficiency of the Harrier. He has been driving SUV regularly for long journeys. He opted for the 6-speed torque converter automatic transmission and the SUV is returning him a fuel efficiency of 14-15 kmpl which is quite good. Harrier is available only with a 2.0-litre diesel engine that puts out 170 PS of max power and 350 Nm of peak torque. As standard, it comes with a 6-speed manual gearbox.