Earlier, we have seen videos in which a vlogger decides to pay for something using coins or fill petrol of Rs. 10. Those are usually pranks but here is a true story, a vegetable vendor from Assam has decided to buy a Suzuki Avenis scooter using an unusual way of payment method. He decided to make the down payment using coins.

He wanted to buy the scooter but it was very expensive for him. So, he started saving for it. It took a long time for him to save money for the scooter. He saved coins for almost a year and then approached a Suzuki dealership. The showroom started counting the coins and it took them two to three hours to count the coins. The total amount turned out to be Rs. 22,000. 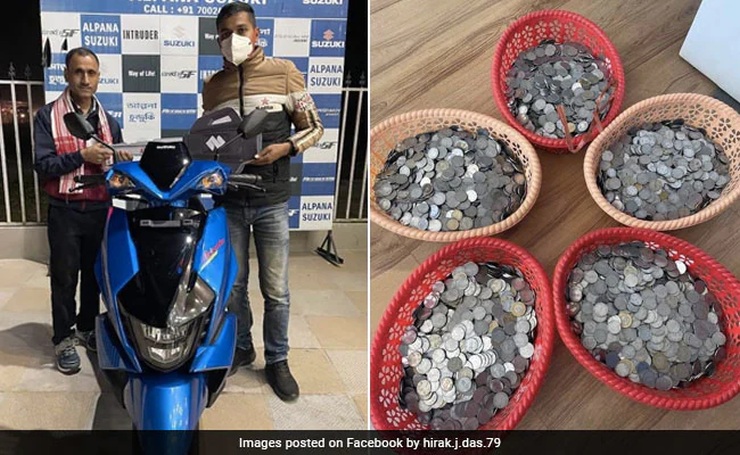 The coins were brought to the dealership using a sack. The sacks were emptied into baskets and then the counting begin. In the video, we can see dealership guys counting the coins. The rest of the amount of the scooter was paid through financing.

Powering the Avenis is a 124 cc, air-cooled engine that produces 8.7 PS of max power and 10 Nm of peak torque.  The engine is the same one that is doing duty on Access 125 and Burgman Street.

Avenis comes with a decent feature list. It gets an LED headlamp with turn indicators mounted on the handlebar. There is an LED tail lamp also. LEDs are better than halogens because they are brighter and have a longer life span.

It also comes with a USB port to charge your mobile devices. Then there is a fully digital instrument cluster. It is capable of showing a tachometer, speedometer, fuel gauge, odometer and is also Bluetooth compatible. When connected via Bluetooth you can get call alerts, SMS alerts, over-speed alerts and battery indicator. Suzuki has also provided an external fuel filler cap so you do not have to get off the scooter to refill the fuel tank. There are two utility hooks also on which you can hang stuff.

Braking duties on the Avenis are done by a disc in the front and a drum at the rear. It comes with a telescopic front suspension and a single rear shock absorber. The front-wheel measures 12-inches while the rear one measures 10-inches.