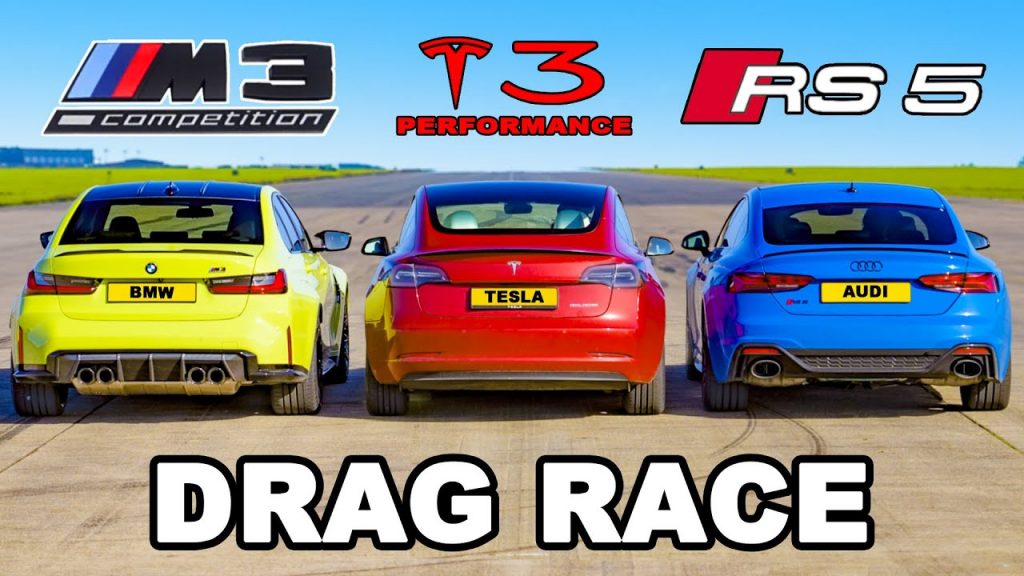 If you were in the market for a high-performance four-door sedan, would you opt for the BMW M3 Competition, Audi RS5, or a Tesla Model 3 Performance? Well, after watching the trio go head-to-head in a series of performance tests, you might have your answer.

As you may or may not know, the current M3 Competition uses a 3.0-liter twin-turbocharged straight-six muscling out 503 hp and 479 lb-ft (650 Nm) of torque. BMW sells the sedan in both rear- and all-wheel drive configurations with the car in this test having all-wheel drive, aiding in its straight-line performance.

By comparison, the Audi RS5 seems a little underpowered as its 2.9-liter twin-turbocharged V6 is rated at 450 hp and 442 lb-ft (600 Nm). However, those figures do mean it matches up quite well with the Tesla Model 3 Performance that has a pair of electric motors delivering 460 hp and 472 lb-ft (640 Nm).

In the first race, all three cars sprinted off the line at nearly identical speeds but as the race progressed, the M3 Competition started to leave the Tesla behind while the Model 3 Performance finished comfortably ahead of the Audi. A look at the times reveals the BMW completed the quarter-mile in 11.4 seconds compared to the 11.7 seconds of the Tesla and the 12.0 seconds of the Audi.

A rolling race is then held between the trio from 30 mph (48 km/h). Unsurprisingly, the instant power of the Model 3 Performance allows it to initially sprint into the lead but once the Tesla hit roughly 100 mph (160 km/h), the BMW easily closed in and passed it before the half-mile mark. The Audi finished last once again but in the second rolling race from 50 mph (80 km/h), it was able to beat the Tesla but still finished behind the BMW.