We take a look at the iconic MPV

The Mk4 Renault Espace was arguably the last cool people carrier, beloved of the middle-class school runners before they switched to SUVs.

It still had exotic aluminium, plastic and steel elements in its construction yet was simpler than its predecessor, being monocoque-Laguna-related rather than complicated spaceframey.

The general specification has all the usuals, while Privilege trim adds alloys and climate control and uppermost Initiale brings leather upholstery. 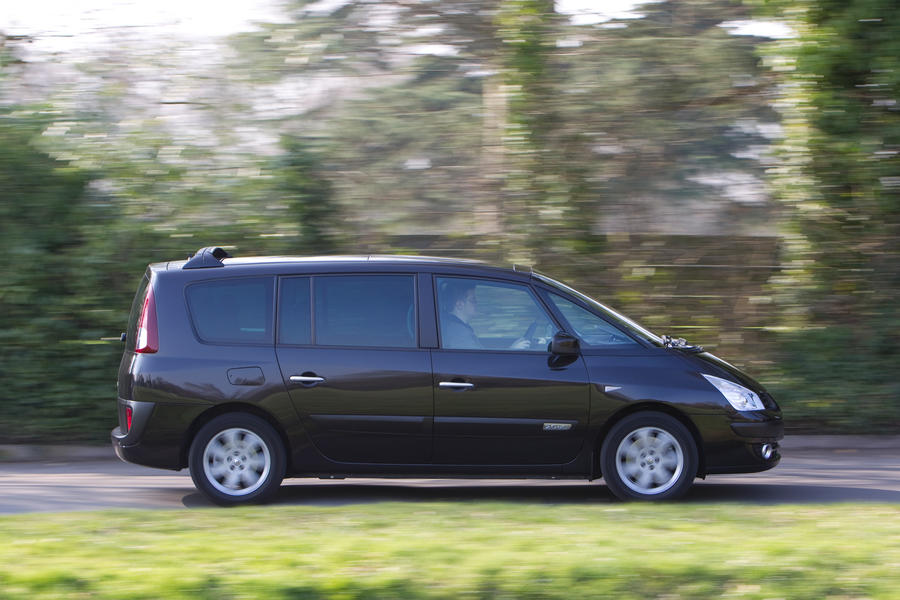 There are plenty of decent petrol and diesel options. If you don’t do the miles, the 3.5-litre petrol V6 is going to be the bargain buy, along with the 2.0-litre four-pot. Realistically, it’s the 2.2-litre diesel four that delivers reasonable pep and MPG in the mid-to-high 30s, but the 1.9 dCi is a decent enough plodder and the 2.0 dCi is the easiest to find. There’s also an uncommon 3.0-litre diesel V6.

The Espace was revamped a couple of times, in 2005 and 2006. You might notice the redesigned dashboard and front end. Of more use, though, was a sliding rail for the rear seats. 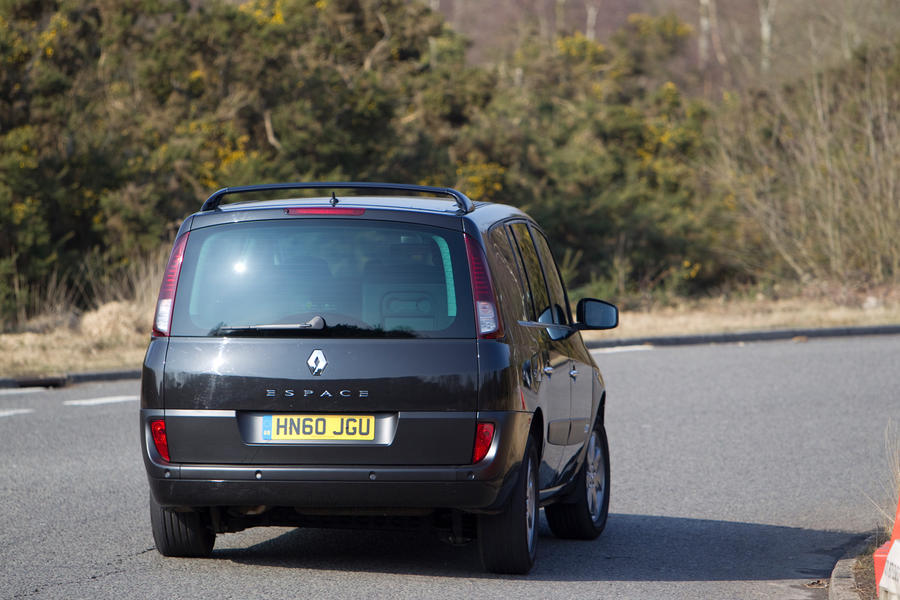 If you’re really into seats and space, there’s the Grand Espace, which lived a bit longer (until 2012) than the standard shortie. It really does have hectares of spaces inside. The seats may fold, but they don’t disappear into the floor. There are loads of storage bins – simply much more space for less money.

As for problems, it’s usually electrics, meaning all the gadgets, plus the clutch, which can have a rather short life. Else, it’s smoky diesel engines, failing ECUs and worn suspension. Composite body panel damage is expensive to fix. As they drop down the ownership pyramid, Espaces become more problematic, because they do need looking after. Even so, we reckon it’s worth the bother of finding and buying if you want a classy family van. 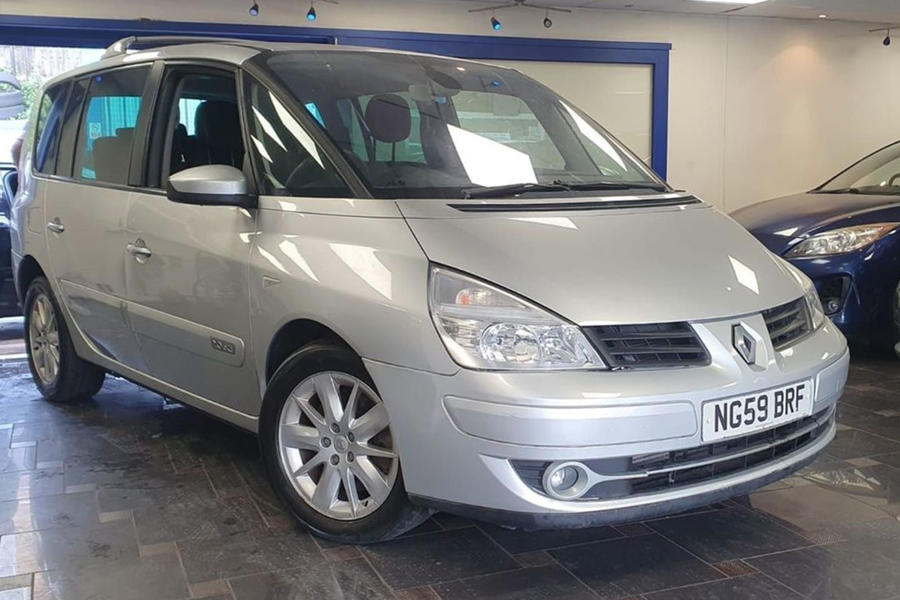 2010 Renault Espace 2.0 dCi Dynamique, 51,000 miles, £3990: This is an especially tidy example that has low miles for the year, just a couple of previous owners and a full service history. It seems like a good price for decent Dynamique spec. 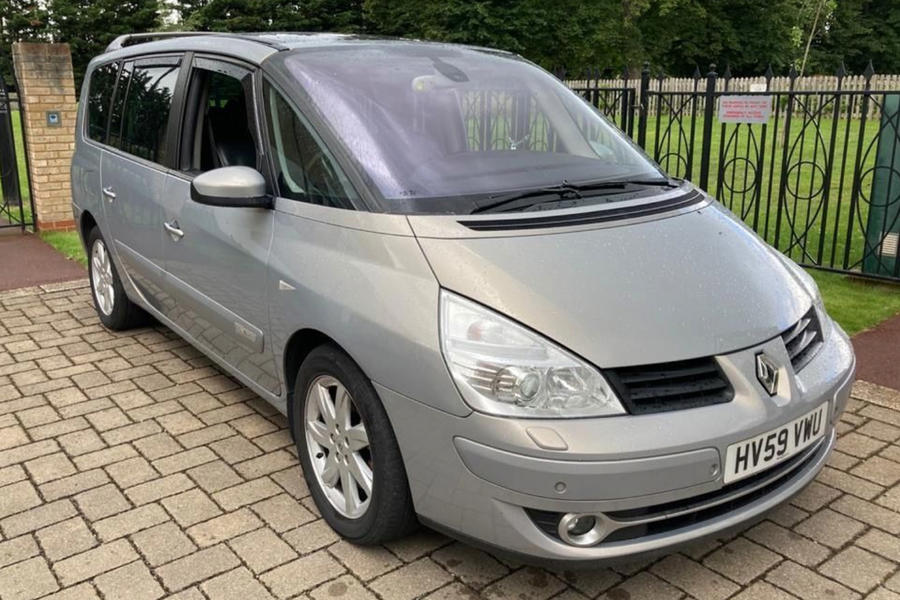 2009 Renault Grand Espace 3.0 V6 dCi Initiale 96,000 miles, £4895: This is the top-spec, big-engined model with absolutely everything as standard. Four previous keepers. You will have to live with 29mpg, but what a lovely way to travel.

2008 Mercedes-Benz R320 CDi Sport 94,000 miles, £4490: For those who don’t want a V-Class with tinted windows, the R-Class is like a giant estate with a posh badge. This is a two-owner car with history and recent bills so a viable alt-Espace. 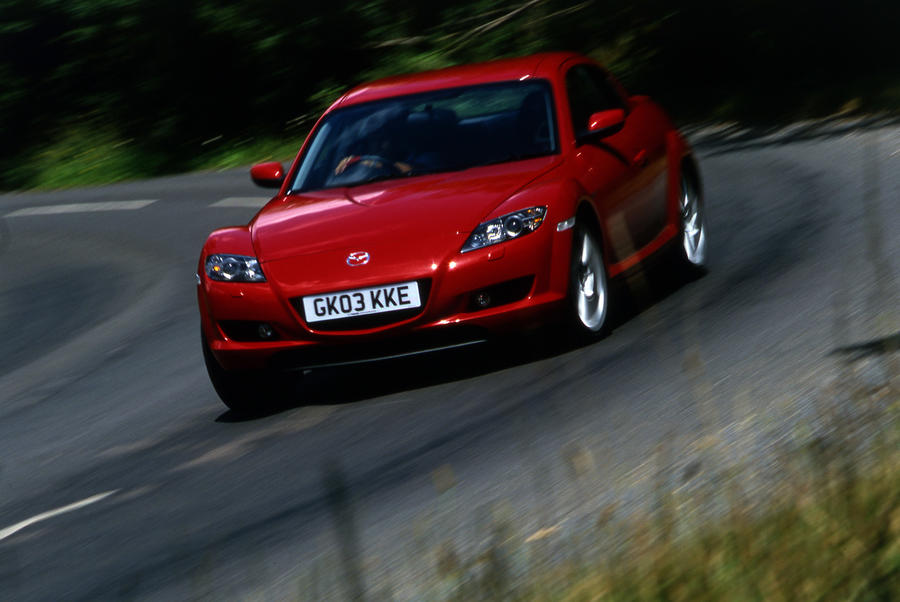 Mazda RX-8, 2003-2010: Enthusiasts are inevitably attracted to the oddest of coupés, but sometimes it’s best to run the other way. A funky four-seater with a smoothly powerful engine at a temptingly low price: what’s not to love?

Well, before we get stuck into that, let’s look at the upsides of the RX-8. Actually looking at it is a very uplifting thing to do, and inside that cool shape it’s very cosseting. Mainly, though, it’s a Mazda sports car, which means it handles very sweetly. 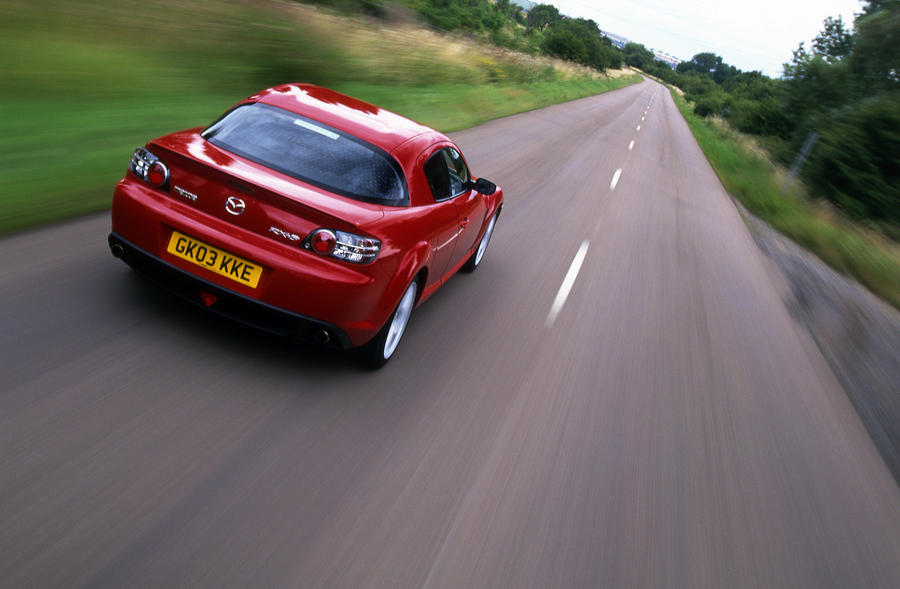 There were two flavours, the 189 belting out 190bhp and the 230 doing 228bhp, coming in just one well-equipped trim (although there were special editions). Importantly, the 2008 facelift tidied up the front and rear. It also brought extra equipment and deleted the less powerful engine.

Despite being well built, the rotary engine is a harbinger of oil leaks and expensive doom. If you get past the ‘is it in good condition?’ and ‘does it have a service history?’ enquiries, book a compression test at a specialist. Otherwise, beware worn suspension, oil leaks and an ex-owner who wouldn’t pay the bills. But this is certainly a car worth saving for posterity. 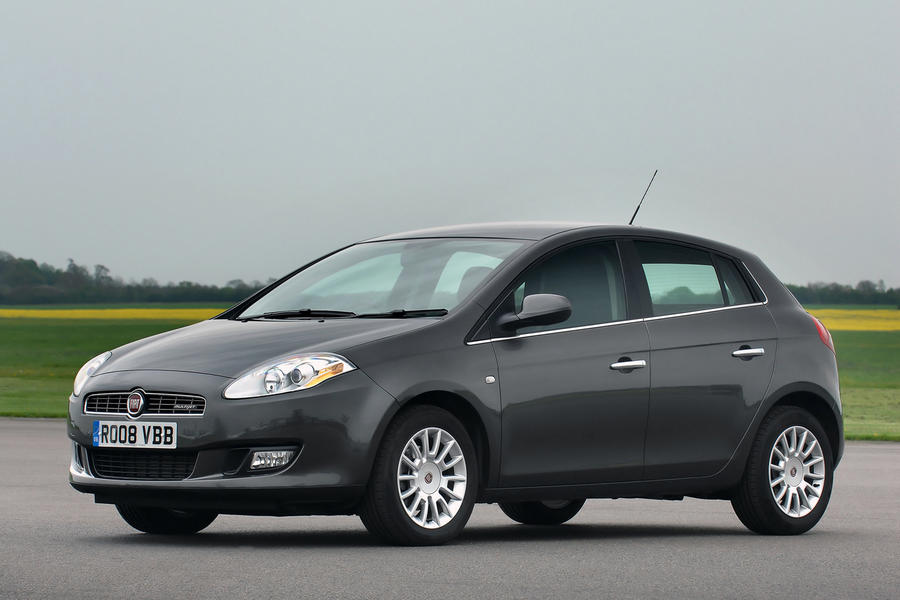 Fiat Bravo, 2007-2014: The reborn Fiat Bravo wasn’t really a match for the contemporary Ford Focus or Volkswagen Golf but was massively cheaper. It deserved to do better in the sales charts. Significantly, Euro NCAP gave it the full five stars for safety at the time. The best reason to buy a Bravo now is that it’s a decent family hatchback, with a big enough boot (at 365 litres) and the poor rear leg room isn’t a problem when there are a couple of Isofix child seats in place. It was one of the widest hatches on the market, too.

The 105bhp 1.6-litre diesel delivers an impressive 58mpg, but if you don’t do big mileages, the T-Jet engines are great petrols. It’s certainly worth a punt and a better buy than the Punto. It seems to have a decent reliability record; just watch out for worn anti-roll bars and the diesel’s EGR filter getting clogged. 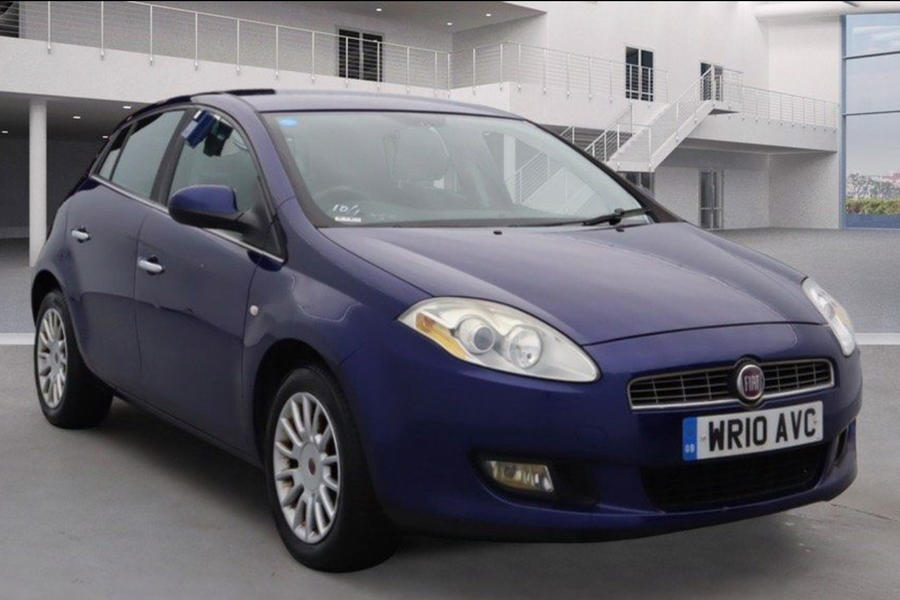 2010 Fiat Bravo 1.4 Dynamic 78,000 miles, £2000: This is a keenly priced, dealer-offered petrol that will breeze into the ULEZ. It comes with a six-month warranty and a good spec: cruise control, alloys, rear parking sensors and more than 40mpg. It’s ready to be an efficient, smart and great-value runaround, and its four previous owners don’t seem to have left their mark. 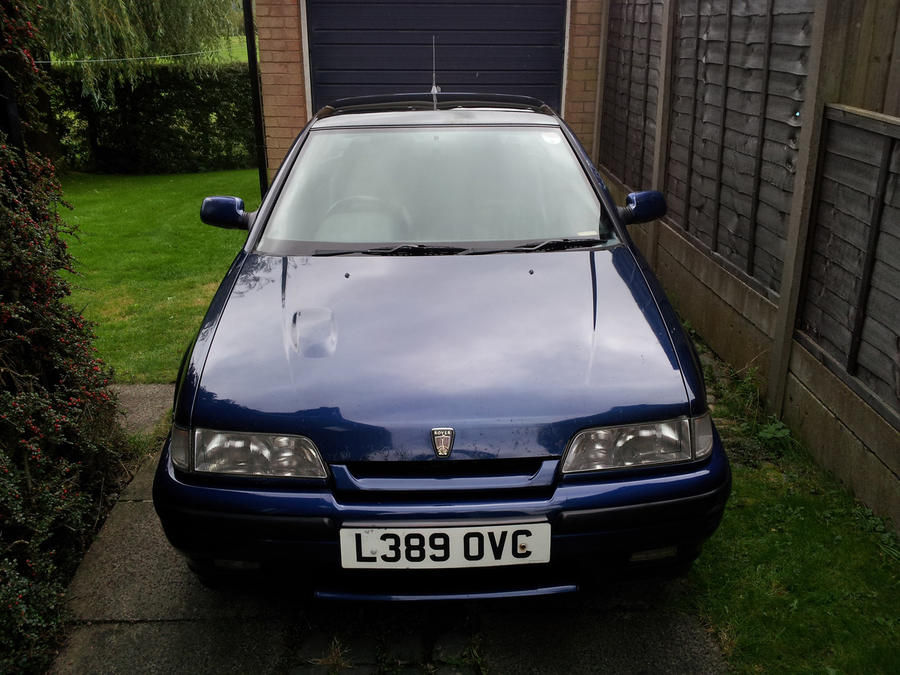 The most effectual Tomcat: This is what car enthusiasts do: buy cars simply because they love and appreciate them. “I’ve had to buy another car recently, as next year is the 30th anniversary  of the launch of the ‘Tomcat’ 200 Coupé and one became available that was too good to miss,” John tells us. Hats off to him. This was a sharp-looking car and one of the last great models to come from the Rover Group.

Bangernomics world: Join a recovery service. I know there’s a hardcore, socket setowning minority who would rather fix things themselves, but that won’t help much on the hard shoulder (if you can find one). It’s always worth the extra for ‘at home’ when you’re stumped. I’m just about to dial out…