Done with SUVs and hybrids? Well, you might make an exception for this one

Why we’re running it: Can a Bentley be affordable to run and still be a Bentley at the same time? 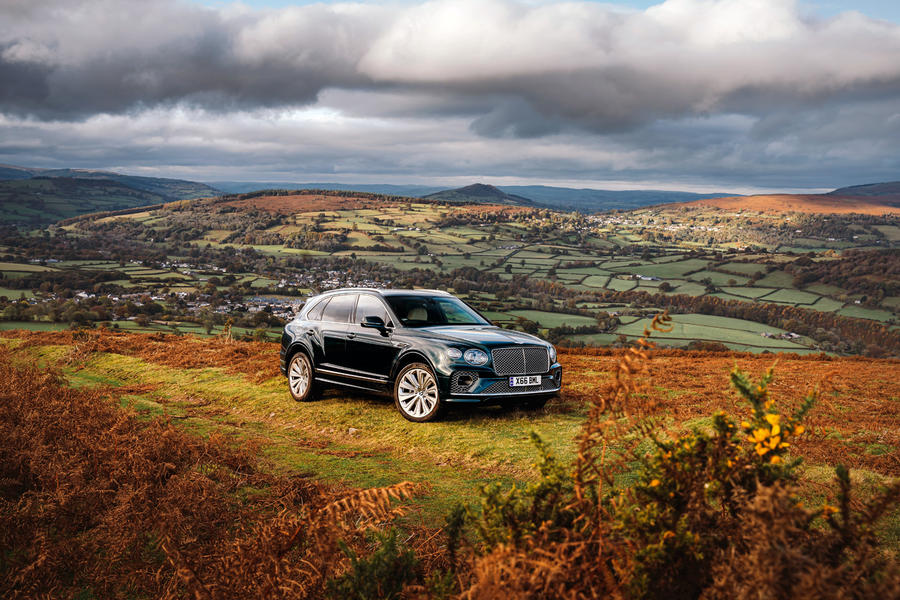 Life with a Bentayga Hybrid: Month 1

It was a difficult decision to run the Bentley. I know, I can hear the violins from here.

But the harsh reality is that I rack up a huge annual mileage, I have to pay for my own fuel and I’ll not be alone in noting the stuff isn’t exactly cheap right now. Which is why I’ve never run one in the past. But the appearance of the Bentayga Hybrid changed all that, at least on paper. Yes, of course I knew it had no chance of doing the 83.1mpg claimed for it, but I thought that, in theory at least, it might drag the prospect of running a Bentley out of the realm of the simply impossible and into that of the just about affordable, so long as I was very, very careful.

Being very, very careful about how you consume fuel is probably not a matter of overwhelming concern to most Bentley owners, but I thought it would be interesting to see, even as a technical exercise. And here’s the news, both good and bad. The good news is that it really will do around 28 miles on electrical power if you keep your journey local. And my local town is 11 miles away. This means I can get to the supermarket and back by Bentley for a lower energy cost than taking our family 1.5-litre Volkswagen Golf so long, of course, as I only ever charge it at home, which I do. And a wonderfully pleasant, if somewhat ostentatious, commuter car it is, too.

But what about longer journeys? I think it can still be pretty remarkable. Recently, I headed off on a gentle cross-country jaunt to have a pub lunch with an old friend, left with the battery fully charged and did over 80 miles at better than 40mpg – in a 2.5-tonne Bentley. I don’t think either of my more recent long- termtestcars–aBMW128ti preceded by a Ford Focus ST – would have done any better; the Ford probably quite a lot worse. And yes, you have to add the cost of the electricity, too, which is £2.38 for those 28 miles, but that’s buttons when it comes to running a Bentley.

What if, however, you find yourself in a suboptimal situation, such as you’ve been an idiot and forgot to charge the car, you’re in a hurry and the journey is all motorway? I’ve been there, too. Drive down said motorway as fast as you think will leave your licence unburdened by additional points and its fuel consumption doubles. Early 40s MPG in gentle driving with a bit of electrical assistance becomes very early 20s MPG when rushing on an empty battery.

Not good, then. But one more reason to plan ahead, take your time, sit back and enjoy the ride. It’s what this car is best at.

‘UBER-BENTLEY’ MODE There is nothing more refined than an EV, and when it is in this mode, the Bentayga feels very Bentley indeed.

SUB-BENTLEY ENGINE The off-the-peg 3.0-litre Audi V6 is not a very Bentley engine, but thanks to hybrid torque, you rarely need to use many revs.

In my quest to keep running costs within faintly affordable limits, I’ve been going as far as I can on electricity. The blurb says 24 miles is all you’ll get out of the battery, but even without trying I’m seeing 30 or more. It also regenerates so much that by descending a nearby hill I can add three miles. Hopefully such measures will help keep me from debtor’s prison for a while yet.

Welcoming the Bentayga Hybrid to the fleet – 17th November 2021

It’s a sign of the times that I’m even writing this. Ten years ago, the very idea of a Bentley SUV would have seemed hard to imagine, although I’m not entirely sure why, given that the brand built its name on huge, heavy, do-anything, goanywhere cars. But the thought that Bentley might not only build such a car but then equip it with the smallest engine ever fitted to a Bentley, the first with six cylinders since the 1950s and the least powerful in the modern history of the brand? That would have been closer to unthinkable.

But we must move with the times, whether we like the direction of travel or not, and you can’t blame Bentley for doing so, because the statistics say my new long-term Bentayga Hybrid will cover 83.1 miles for every gallon of unleaded I buy and emit only 82g of CO2 for every kilometre travelled. In environmental terms, it makes a 1.0-litre Volkswagen Up look like a Sherman tank. Or rather it would were such numbers not utter rubbish. Their only relevance is to the taxman, ergo the reason for the car’s existence. And the truth is that, for this reason alone and rightly or wrongly, there will be people who are able to park a Bentley outside their house who might never have been able to dream of doing so before.

So this, then, is a pragmatic Bentley, a democratising Bentley that also shows how far the company has come, for these aren’t adjectives that I used to associate with Britain’s second-most blue-blooded automotive brand. Of course, Bentley could have chosen to stay firmly rooted to the past, but it tried that at the back end of last century and it damn near killed the company. Adapt or die.

This, then, is a Bentley for realists, or at least those like me who pay their own travel expenses. The hard facts we know: the Audi-supplied, single-turbo V6, the 17.3kWh lithium ion battery, the 443bhp combined system output and the, wait for it, 2648kg kerb weight. And yes, that is more than a Mulsanne…

What we’re here to discover is if the above can still be crafted into a credible Bentley, if there’s enough of the character and charm we hope for all cars flying those wings to justify their position on its prow.

At least one problem has gone away. The 2021-model-year facelift has transformed the car’s appearance. It’s still not gorgeous, but which full-sized SUV is, save a Range Rover? But it has achieved two critical aims: first, it has removed its looks from high on the list of possible reasons that all by itself might stop someone buying the car. Second, it has given the Bentayga proper presence: for all is size and hulking appearance, the pre-facelift Bentayga never really had any. Given how little room for manoeuvre designers usually get at facelift time, it’s a sizeable achievement. 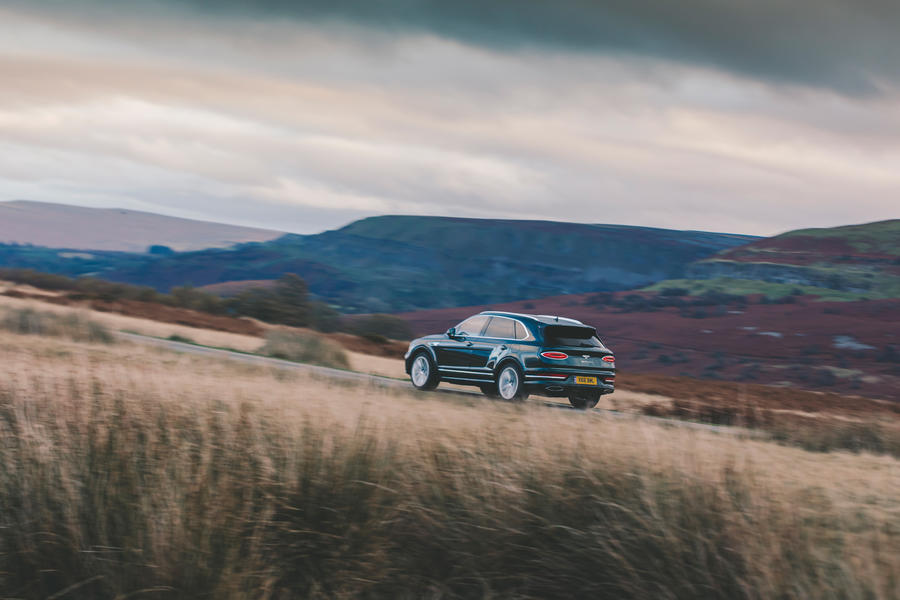 But it has come at a cost. Inside and out, this is a different car to its predecessor, but so too does it come at a different price, the entry point to Bentley ownership now starting at £155,500, some £22,000 more than the same hybrid version of the previous model. Bentley would say you were getting a lot more car for your money, which I wouldn’t dispute, but it’s also true that Bentley boss Adrian Hallmark believes the brand should become considerably more upwardly mobile, and doubtless that view is reflected here as well.

And all that’s before you succumb to the siren call of the options list. I had some say over the colour, and I think the Viridian green paint is as good as I’ve seen a Bentayga wear, but no choice whatsoever over the interior spec. I have in the past driven Bentaygas groaning under the weight of more than £75,000 of non-standard applied goodies, so actually the £30,000 spent titivating this car is a fairly modest outlay. 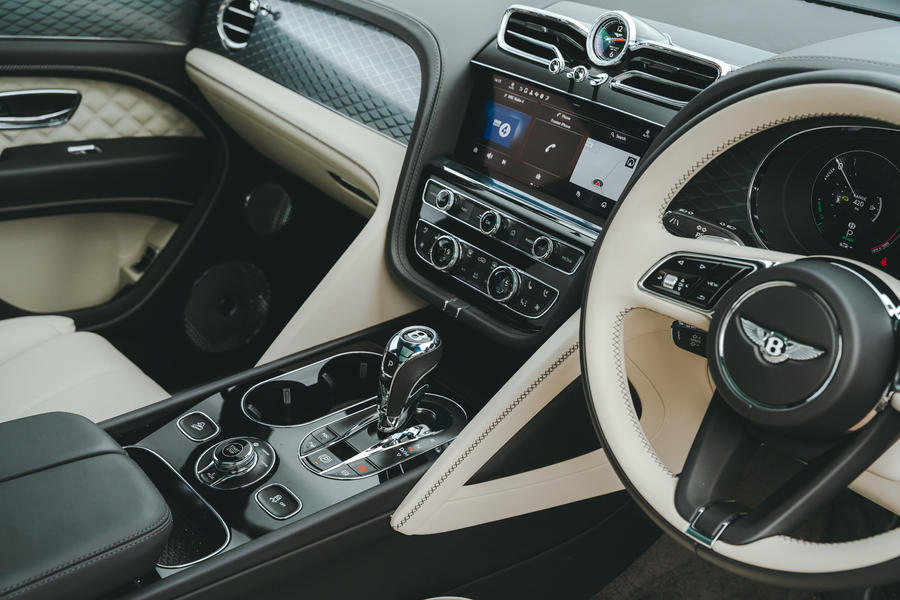 There’s still plenty I could leave out. I don’t need the 22in rims of the Mulliner Driving Specification, but some of the other touches (diamond quilting, embossed Bentley emblems and so on) are lovely. Once you’ve heard the Naim audio, you wouldn’t want to be without that, either. But I would probably ditch the Touring Specification, because I hate lan- keeping assistance, am not that keen on active cruise control, don’t need night vision and only really want the head-up display; and life would go on without front seats that air your nether regions while simultaneously massaging your back. I love the rear blinds. But picnic tables and rear privacy glass? Not for me, either.

The car is here and I’m just getting to know it. And I know already that if my finances are to survive the next three months, I must run on cheap-as-chips home-delivered electricity as much as possible. It won’t help much on long runs, but it will encourage me to use the Bentley for local journeys where I would have left a V8 behind, because if the journey is less than 25 miles (exactly the return mileage to my local town), this enormous Bentley will be cheaper by far to run than the faithful family 1.5-litre Volkswagen Golf. I’m looking forward to it already.

Not long ago, people said that if you could afford a Bentley, you could afford the fuel. Ergo, the cost of the fuel (and by inference, its environmental effect) didn’t matter. But in 2021, the instant popularity of this new Hybrid model puts the lie to that. Better still, the Hybrid adds a new dimension to low-speed driving, a smoothness and silence even the W12 can’t match. So you can buy this car on the grounds of pleasure as well as conscience. 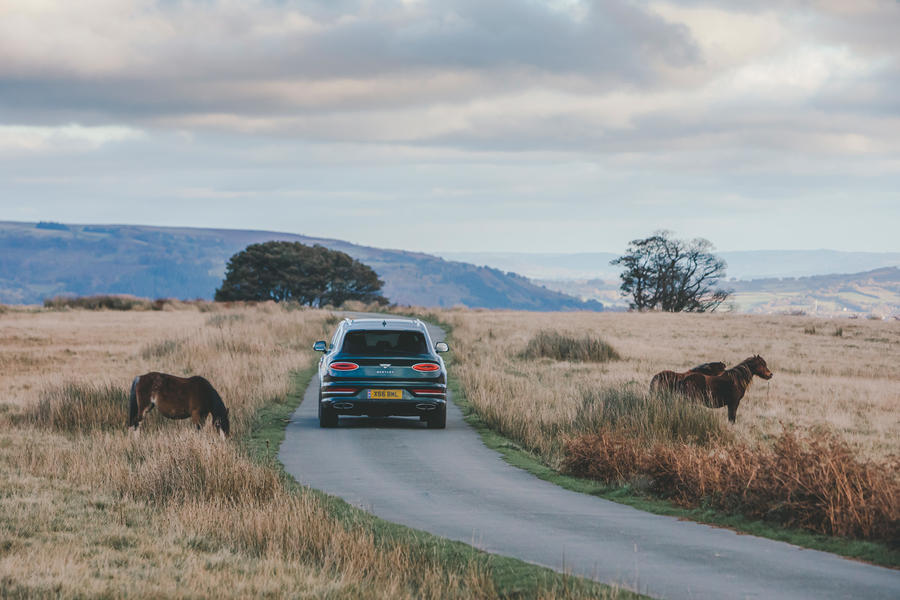