Build quality of a vehicle is a factor that many new age car buyers have started considering. Government has also come up with several norms to make cars more safer. Manufacturers like Tata and Mahindra are very popular among buyers for making well built cars. Volkswagen also offers a good quality for their cars and it has been proven several times in the past. A video is now circulating online that shares an experience of a Volkswagen Taigun owner who’s brand new SUV met with an accident on the same day he took the delivery.

The video has been uploaded by Nabeel Nawab Vlogs on his YouTube channel. By the time vlogger was shooting this video, his SUV had come back from the workshop after the repair. He shared his experience with the vehicle and said how satisfied he was with the overall build quality. He took the delivery of his Volkswagen Taigun 1.0 litre TSI last year. On the day they were taking the delivery, he took his family to the dealership with him.

After the paperwork and other formalities, his father sat inside the car and drove it out of the dealership. The vlogger went in the other car as he had some other work to finish. His father and mother were driving the car back to home and according to the video, it was festive season and there was a lot of traffic on the road. Vlogger’s father was on the extreme right lane of the road stuck in traffic when a truck driver tried squeezing in through the left lane between the cars. Vlogger’s mother was sitting on the co-passenger seat when this incident happened. 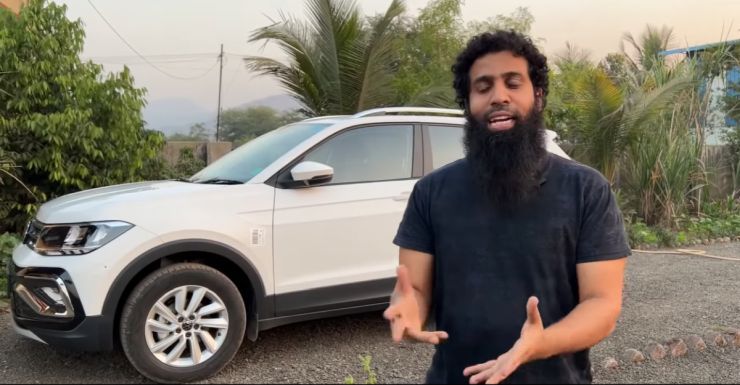 A piece of metal was pushing out from the body of the truck and that rubbed against the brand new Volkswagen Taigun. The metal piece which was pushing out from the truck pierced through the metal sheet on the door. Thankfully, the cross metal structures inside the door frame stopped the metal rod from piercing all the way across the door to the cabin where his mother was sitting. he said, if the metal structures inside the door had not stopped the rod, there were chances that, it could have injured his mother.

Video shows a clip after the accident had occurred. There were no signs of damage inside the cabin. The damage is visible from the outside only. He said, he was very happy with the overall build quality and suggested other car buyers to do their research about the safety of a car before buying a car. He got the car repaired under insurance and it was back from the workshop in some time. He is although not completely satisfied with the paint job as there are paint particles on the ORVM of the car.

The post Brand new Volkswagen Taigun gets involved in an accident: Owner satisfied with the build quality first appeared on Cartoq.Cartoq Read More