It’s a balmy Monday morning on Brighton’s pebbly seafront. The walkers, cyclists and desperado electric scooterists are out in force, soaking up some unexpected February vitamin D. The cafe proprietors are sweeping floors, laying tables and getting ready for a brisk lunchtime trade. The weather is ideal – except if you were hoping for the sort of cold, wet, foreboding environment to set a tough challenge for an electric car on a long drive.

Thankfully, where we’re heading, we’re almost guaranteed some wintry smirr. It’s somewhere between 450 and 500 miles north from here to Glasgow, depending which way you go – and today we’re going in a Kia EV6, mostly just to find out how long it takes to cover that kind of distance on the UK road network in an EV in 2022.

This will be a bit of a race between tortoise and hare, except I’m very much hoping our hare doesn’t fall asleep under a tree. Photographer Max Edleston will be driving the trip in a Kia Proceed GT, which, with its 201bhp 1.6-litre turbo petrol engine and 53-litre tank, should make pretty short work of that kind of touring. And I will be doing the same in a single-motor, rear-wheel-drive, mid-spec EV6, taking my chances on the UK’s public EV charging infrastructure to find out if it really is as sparse and slow-growing as you so often hear.

This isn’t my first tilt at this peculiar all-electric reverse Brighton run. Twelve years ago, before motorway rapid chargers were a thing and when getting into three figures for mileage in any EV felt like an achievement, I made the very same trip. That was in a Mini E prototype, which came with less than 30kWh of usable battery capacity and only a ‘granny’ charging cable to top it up with. It took four days, and they were among the most anxious I’ve ever had in a car. However the EV6 does, then, I will know that it could be worse.

We linger by the shorefront shops to get our photos and video, and then at 10.45am we set our sat-navs, exchange steely looks and hit the road. 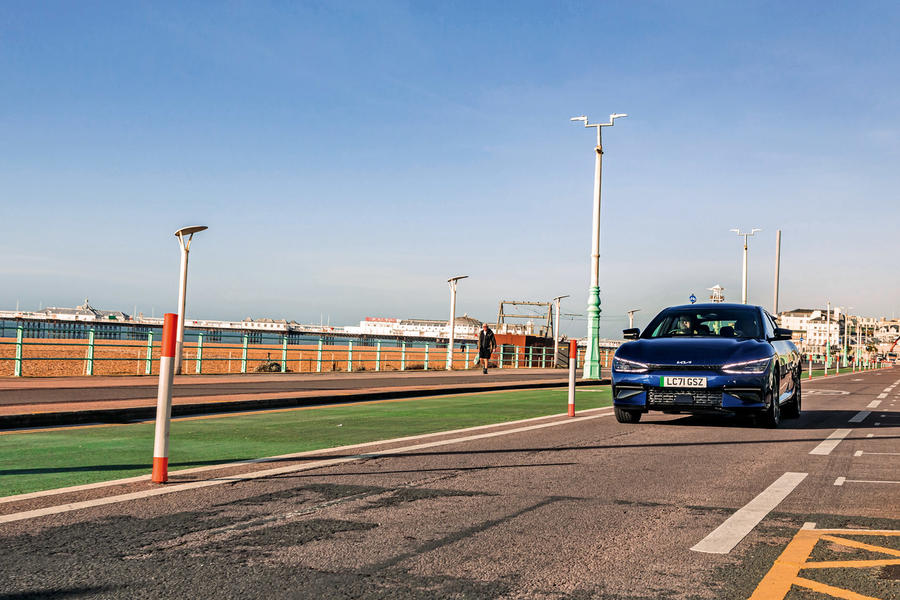 Our first hundred miles have passed easily but not entirely to plan. I’ve sent Edleston off in the Proceed guided only by its factory-fitted sat-nav system, but I’m using a bit of extra help. Previous experience with electric motoring has proven to me the value of a good online route planner accessed via a smartphone app, and the latest I’ve had recommended to me has a name that’s very easy to remember: A Better Routeplanner.

This programme simply needs to know exactly what you’re driving and where you’re going and it will work out the best way to get there. It will plot a route via the fastest DC rapid chargers available on the fastest route you can take (or near to it), knowing your car’s real-world motorway range, but also recommending only those chargers that are working, available and compatible with your car. It also knows that it’s usually faster overall to stop once more on a long trip, but avoiding having to charge past 80%, at which point charging rates always slow considerably. I told you it’s clever.

But how clever exactly? The route planner was all set to send me up the M40 and M6 – the way you would expect to go, certainly, but ignoring motorway message board warnings about 45-minute delays on the M40 near Beaconsfield and a crash on the M6 that eventually develops into a full closure. So I ignore it on both counts; replot a route via Leeds, Wetherby and Barnard Castle; and am advised to charge at an Instavolt rapid charger just west of Leicester in, ahem, a McDonald’s car park.

The EV6 has been cruising along nicely, returning 3.1mpkWh at a consistent 70mph, giving it a realistic motorway range of about 220 miles on a full charge. I arrive at the charger in question at 2pm, with a good 60 miles of range to spare, to find it available and working, just as the route planner said. Connecting is easy, and within two minutes the EV6 is sucking down power at 120kW. Twenty minutes of that should be more than enough to get us to our next stop – and about as long as it will take me to devour a sandwich in the cafe next door (sorry, Ronald). 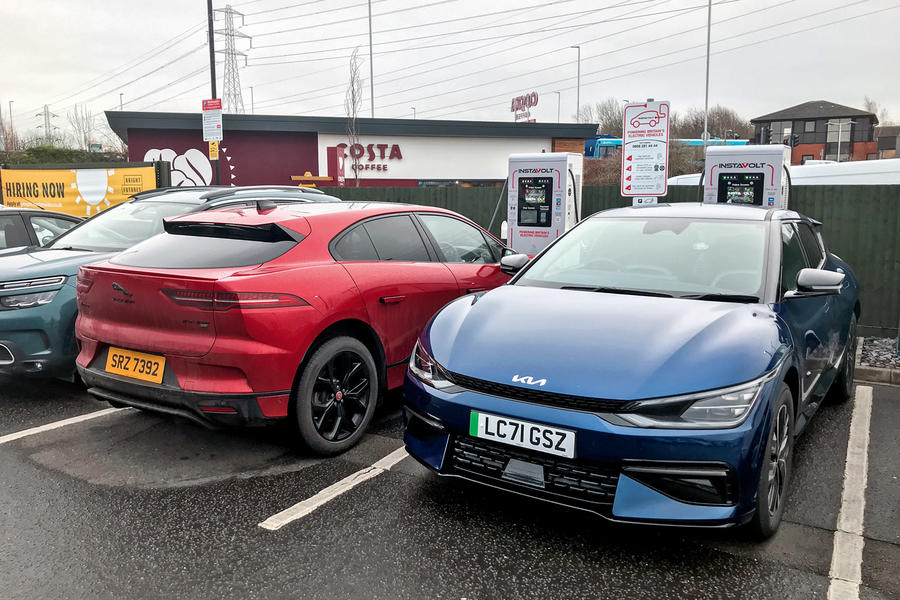 Plain sailing. The traffic is proving kind and, having spoken to Edleston, I learn that the Proceed’s sat-nav detected the jams that my route planner missed. He’s about half an hour ahead of me, but he’s also yet to stop for fuel. This might be a close-run thing, after all.

The EV6 is making remarkably light work of this. Years ago, you would hit the motorway in an EV and watch your range tumble, but the Kia’s is very accurate, and it has legs long enough to match most drivers’ appetite for distance in any case.

How many people do you know who would drive further than 200 miles without a break? That’s the territory the modern EV puts you in. Moving on again quickly, having had half an hour off to rest your eyes, drain your innards and top up your hot drink flask while the car takes on power is just a question of stopping in the right places – and, perhaps, being lucky when you get there.

Our next place will be Leeds Skelton Lake services, a development so new that the Ionity rapid chargers aren’t quite finished yet. Still, there are six in use and three available when we arrive. I connect with high hopes of spectacular 200kW-plus charging rates (which is what Ionity promises and what the EV6 is capable of) but actually get only a 75kW average rate. It’s not what you expect to pay 69p per kW for (most rapid chargers cost nearer half that, unless you’re on one of Ionity’s discounted rates), but what choice do I have but to accept it?

Twenty-six minutes later, we’re not quite full but have more than enough range in the ‘tank’ to make our last scheduled stop just over the border in Gretna. No need to hang around any longer. 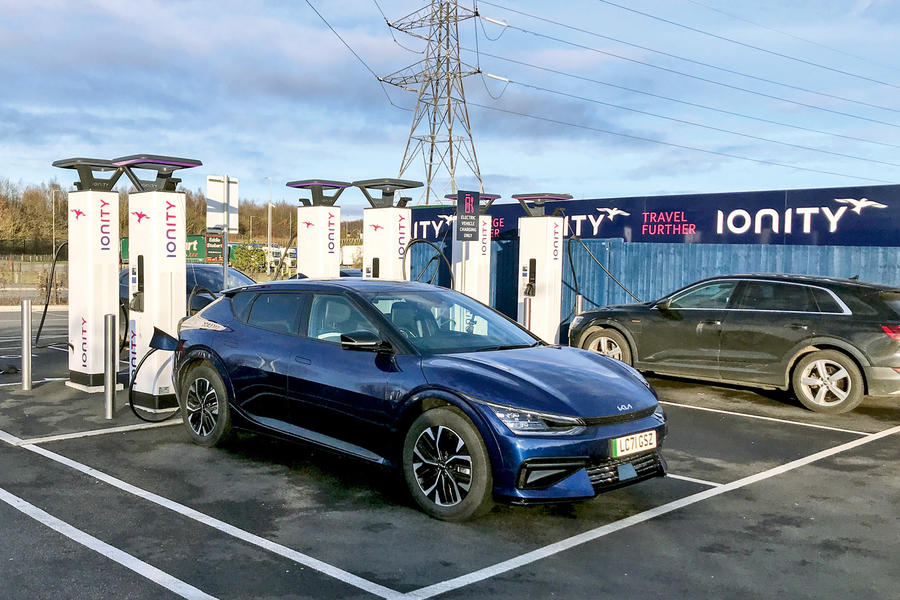 It has been a long day at the wheel, but it’s nearly over. We bisected the Dales and the Pennines on the A66 under cloudy skies and sluiced with rain, and as we climbed, predicted range took a worrying downward turn, just as the demister began to struggle to keep the screen clear (a nudge up on the blower soon sorted that). But as dark descended, so did we – and we arrived at the Ionity chargers in Gretna with about 25 miles in reserve.

It was dark and cold, and if it had been raining, we would have got pretty wet too (there are still no shelters to park under at most of these charging installations). But the Scottish power grid was kinder to us than the Yorkshire one had been, delivering power to the EV6 at a very healthy 150kW. Within 16 minutes, the car had gone beyond 80% full, and it was the driver slowing progress with his need for confectionery. I suspect nobody really needs faster charging than that.

So away we went, with 80 miles to Glasgow, certain we would complete the trip. But when? We arrive at our rendezvous point just south of the Clyde, and Edleston has already been and gone again in search of shooting spots. He must have.

He returns to reveal that he had arrived at 7pm exactly, having stopped three times (albeit only once for fuel). That meant I was 40 minutes behind him, having stopped the same number of times, although clearly for a little longer each time.

A pretty inconsequential 40 extra minutes over what turned out to be a 466-mile trip for both of us makes the EV6 the moral victor in my book. If we had found 150kW chargers at every stop, we might have cut the difference to just half an hour. Then again, we were lucky enough with charging as it was, and we’ve paid for the privilege.

Who would have thought an EV could do so well over distance on UK roads? Not me, I will admit. Moreover, who would have thought that charging it could cost so much? The problem is, when you’re out of power and have places to be, you have little choice but to pay whatever they’re asking. Here’s hoping the force of competition keeps reducing prices and that people are bold enough to leave the motorway for a mile or two to get a better deal. 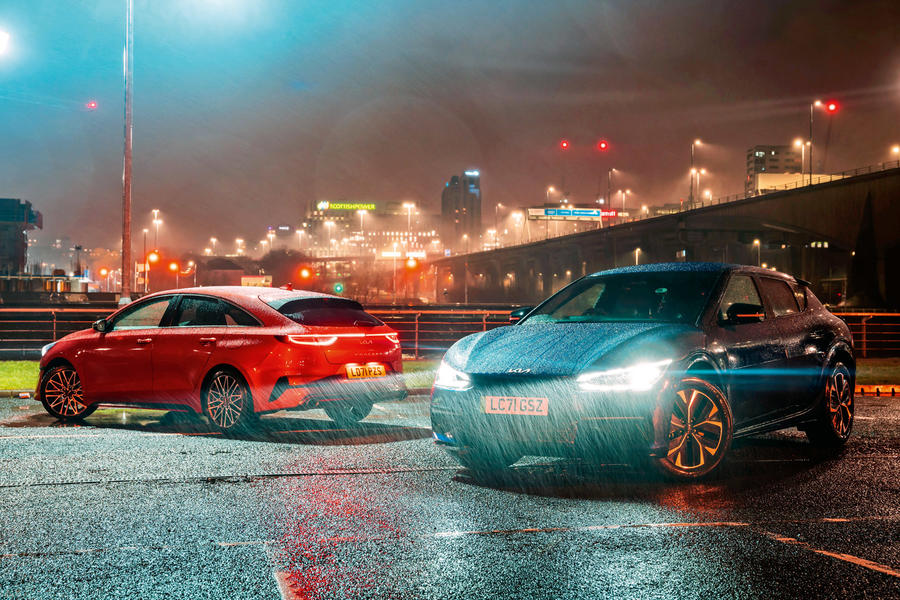 Doing the same journey in 2010

Twelve years ago, aided by my extraordinarily patient partner Emma, I took four days to drive a Mini E prototype from Brighton to Glasgow. We started on a Monday morning, just as we did in the EV6 – but we only made it as far as Luton at the end of day one. We could pretty much charge only at 3.7kW three-pin posts on our route, mostly found in town centre shopping centres. So we spent a lot of time shopping for greeting cards and drinking coffee, needless to say. 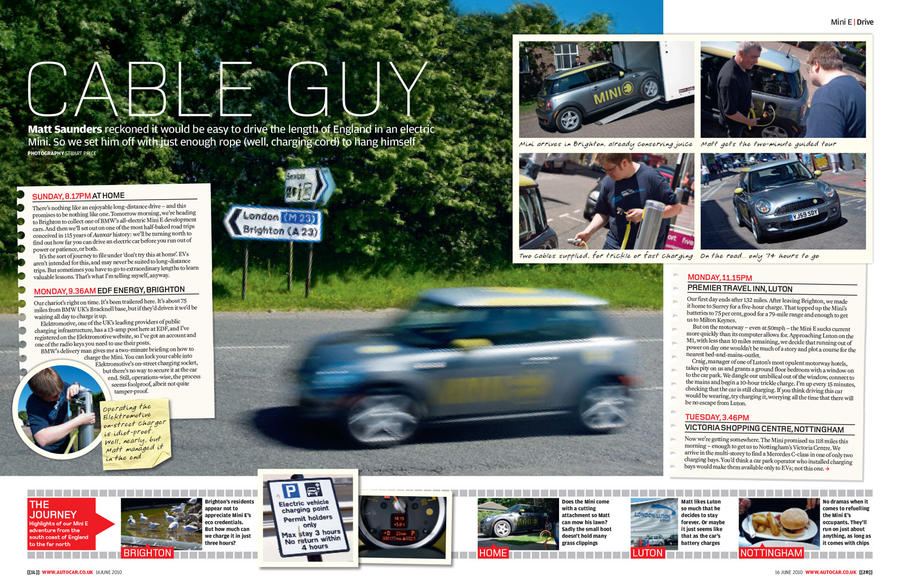 By the time we got to the Scottish border, we resorted to trailing an extension cable from our hotel room window and charging on dodgy hotel room 6A wiring. I slept with the fire extinguisher close at hand that night.

After we had arrived in Glasgow, a little tired and trauma-stricken, we flew to London, took a cab to the office car park and then got in a diesel Mercedes-Benz E-Class and drove home. It felt like dizzying freedom from worry.

Today, electric motoring isn’t like that, thank heaven. But plenty of coffee consumption is still part of the equation.

Electric vs petrol in numbers