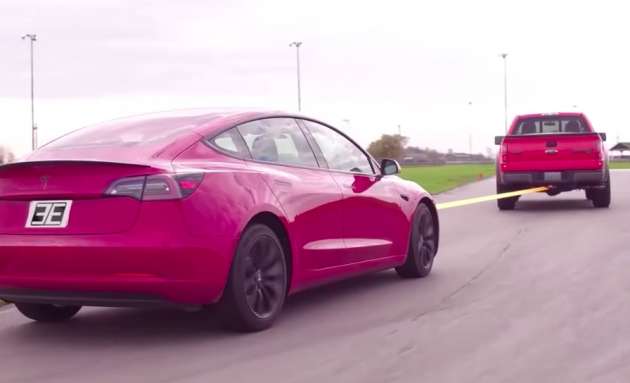 Electrified vehicles, including fully electric vehicles have the ability to harvest electricity from their energy recuperation systems to recharge their drive batteries while on the move. How much charge can be gained by doing so, though?

Jason Fenske of Engineering Explained aims to find out in this video, with the help of his friends and a Ford F-150 Raptor pressed into service as the tow vehicle. Here, the exercise has the Raptor towing the Tesla Model 3 at approximately 30 km/h, and as soon as the two vehicles are in motion, the Tesla’s onboard instrumentation shows that energy regeneration is taking place.

The display in the Model 3 shows that the electric vehicle shows a negative consumption rate of 945 Wh per km, or the amount of energy that is being regenerated and replenishing the Model 3’s battery. This rate of regeneration increases to 1,000 Wh per km, or 1 kWh per km, and Fenske and friends stop both vehicles at the end of the 1.4 km-long circuit.

Next is where Fenske is joined by his two friends, and they set off in the Tesla to see just how far the Model 3 can go on the energy it has regenerated from being towed around one lap of the circuit. Eventually, the Model 3 completes a full lap of the 1.4 km circuit just before its energy reading shows a positive figure again, which denotes it has fully used the energy that was regenerated from being towed behind the Raptor. 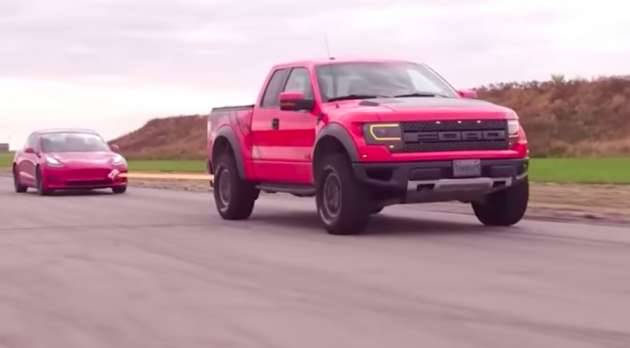 Fenske and his crew then took to the circuit for another four laps in both vehicles to establish a baseline consumption figure, and the Model 3 gave a reading of 193 Wh/km, or the equivalent of 2.2 l/100 km in combustion engine terms. By comparison, the Ford F-150 Raptor managed 22 l/100 km, or exactly 10 times that of the Model 3’s equivalent consumption.

The exercise was then repeated with the Raptor towing the Model 3, and driven this way, the Raptor more than triples its fuel consumption to 69 l/100 km.

Engineering Explained does the sums, and it would appear – tongue in cheek, but apparently backed by the numbers – that based on the energy consumption figures found, it is more energy efficient to tow the Tesla Model 3 to regenerate energy and drive the Tesla than it is to drive the Raptor on its own.

So, what’s the top consumer tip according to Fenske? If you have a Ford Raptor, also buy a Tesla Model 3, tow the Tesla for energy regeneration and voila – you are now saving the planet.

The post Can a Tesla Model 3 recharge itself by being towed? appeared first on Paul Tan’s Automotive News.