India definitely sees some of the most bizarre incidents around the world. Here is one captured on the CCTV. Vadodara Police caught a man on CCTV and sent an e-challan to him. The bizarre part about the incident is that the man was holding two mobile phones while riding.

The video shows the man on a motorcycle riding without a helmet. But the CCTV footage also shows him holding two phones in both his hands. The rider had let go of the motorcycle handle and was using both mobile phones while riding.

Vadodara Police has now issued an e-challan to the person for violating traffic rules. The exact challan amount remains unknown but there are multiple violations here and the cops can issue multiple challans to the person. According to the Indian motor vehicle act, using a phone while driving or riding is strictly prohibited. In fact, even headphones are not allowed while operating a two-wheeler in India.

Similarly, if you put a mobile phone under the helmet, the police will issue a challan for doing just that. Even using Bluetooth devices is prohibited. As per the law, using any type of electronic gadget is illegal while riding a motorcycle or two-wheeler.

listening to music through headphones or Bluetooth devices while riding a two-wheeler is illegal. However, people travelling in the car can play music but after making sure that the music is not causing any disturbance to the fellow motorists. Using headphones even for music is a violation for both the car drivers and the two-wheeler rider. 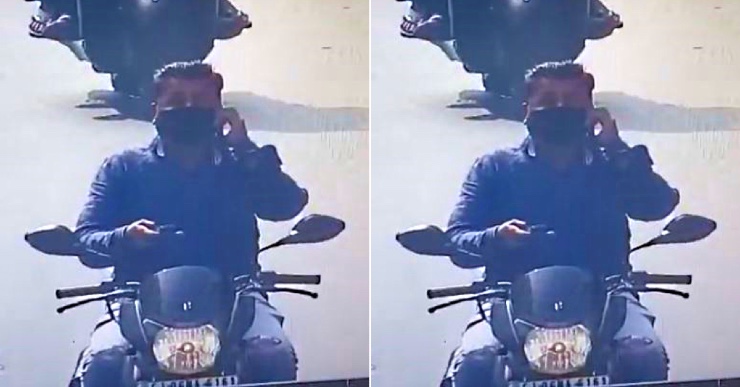 Distracted driving can cause major accidents