The video has been uploaded by MACK RIDER on their YouTube channel. In this video, vlogger shows how the public reacted after seeing the motorcycle and explains how does it feel to ride. The video also talks about the modifications that are done to the motorcycle.

First things first, the motorcycle does not look like Royal Enfield Classic 500 from any angle. It has been completely transformed. The work on this motorcycle has been done by GM Customs in Delhi. This a local garage and most of the work done on this motorcycle is done by hand. 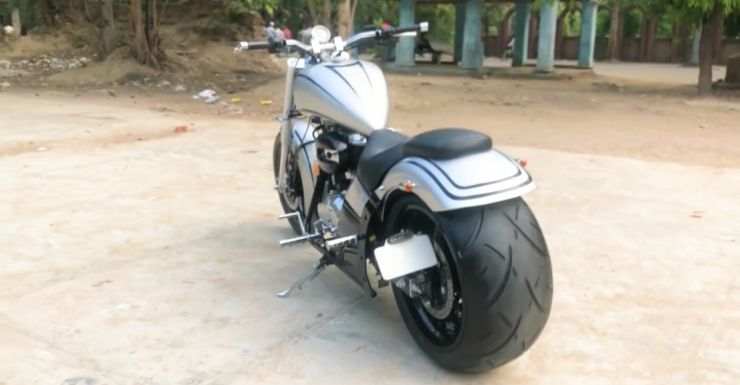 The front, side profile and the rear of the motorcycle has been completely handmade. the original headlamps are replaced with aftermarket LED lamps with LED DRLS. The original Royal Enfield instrument cluster has been retained as per customer request. The disc brake setup on this motorcycle is also the same as original Classic.

The motorcycle has a wave like design which is quite normal in choppers. The motorcycle gets a custom made well cushioned seat which offers the rider a comfortable riding position. Pillion seats have also been installed but, we are not sure about the practicality of those seats. The turn indicators on this motorcycle are aftermarket LED units and so are the tail lamps.

No changes have been made to the engine but, GM customs have placed couple fake engine covers which leave the impression that it is a higher capacity motorcycle. They have also installed twin custom exhausts. Video mentions that only one of them is working and the other is dummy. Vlogger even rode the motorcycle in the compound and came back happy. He felt the fit and finish of the job done was very good and the motorcycle felt very smooth as well.

The post Custom Royal Enfield with super fat tyre: What it rides like first appeared on Cartoq.Cartoq Read More