Public roads can be unforgiving if you’re distracted while operating a vehicle. The primary reason for numerous accidents is being distracted and this video shows why! Watch the video.

In the video, a vlogger seems to be explaining something to the fellow rider. He can be heard saying that the bike stand was touching the ground and it is dangerous. As they are talking and riding slow, the biker swerves to his right.

At the same moment, a biker at high speed hits the rider who swerved to his right. It was a high-speed collision causing all the riders involved in the crash to fall down. The pillion rider and the rider on the other motorcycle were not wearing a helmet.

We can see the head of the rider without the helmet hitting the divider as well. There is no report of fatal injuries in this accident. But it definitely shows why distraction can be extremely dangerous while riding on public roads, especially on high-speed highways.

Riding and talking to each other 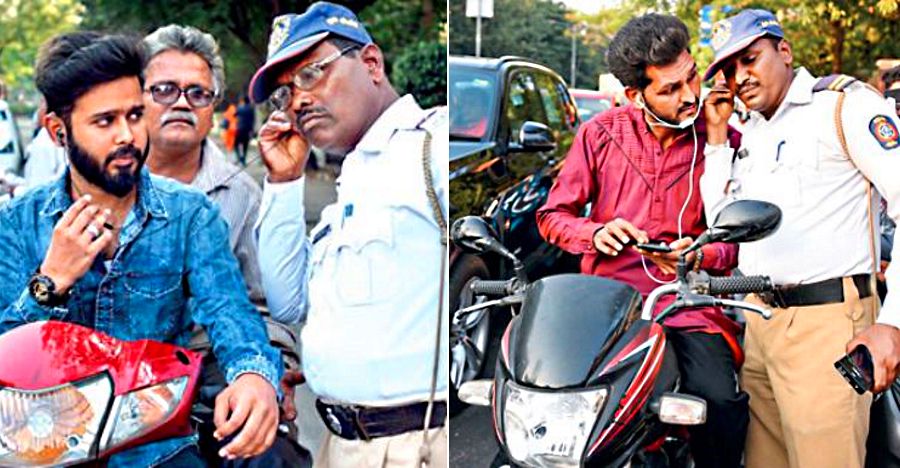 We often see people on two-wheelers riding side by side and talking while riding. This is a dangerous practice and causes a lot of accidents as well. One should never talk to fellow riders verbally while riding.

In Bangalore, the cops started issuing challans to the two-wheeler riders for simply plugging in the headphones while riding. The Police will also closely monitor the CCTV footage of the traffic to track the violators who are using the earphones and will send them an e-challan. This can get quite difficult for the daily riders of scooters and motorcycles as they use the headphones to regularly take phone calls and listen to music while on the move.

The Pune Traffic Police Department has started conducting a similar exercise to nab the two-wheeler drivers with the headphones. The Pune Police are stopping such riders and also putting the headphones in their ears to check if they are listening to the music.

Listening to music through earphones makes the rider lose touch with the various noises in the surroundings, which could be from an approaching vehicle or horns from other vehicles.

This loss of touch with surroundings can be a big problem while riding. Driving or riding on the Indian roads require a high level of concentration, especially because of the nature of most of the motorists who simply do not follow the lane rules and other important rules. Keeping the senses open, and sharp, are the only ways to know about the surroundings.

The post Distracted rider hit by a speeding motorcycle: Who is at fault here? [Video] first appeared on Cartoq.Cartoq Read More