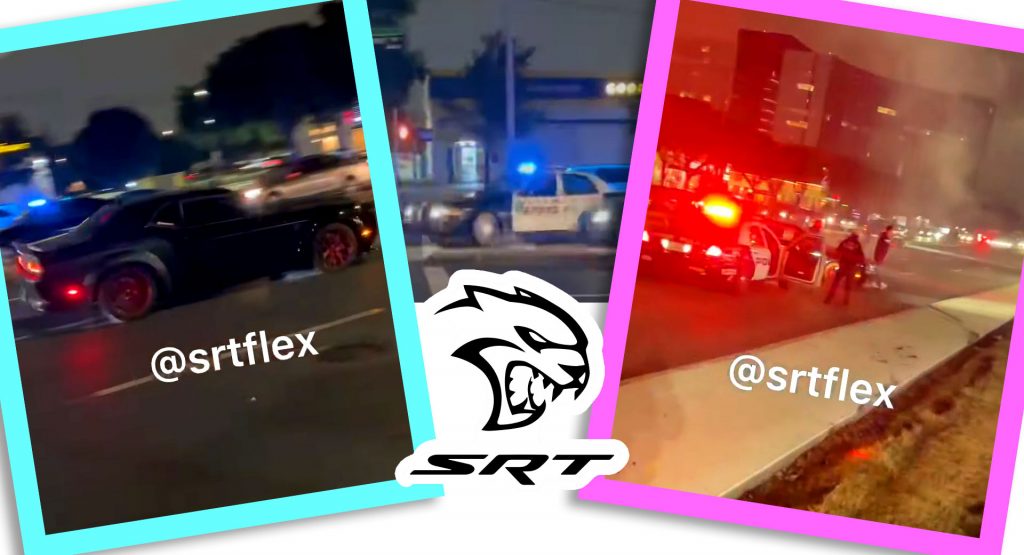 People who break the rules of the road aren’t rare. Plenty can admit to stretching the legs of their performance vehicles in venues that aren’t appropriate. What is rare is seeing the police catch a person in such a situation before they even get started. That’s exactly what happens in this video though as the 5-0 is on the case before the widebody Dodge Challenger slides into the curb and crashes.

In this short but almost comical video, we see a person driving a Dodge Challenger, with a single passenger in the vehicle. There’s certainly a lot of evidence that this isn’t just any Challenger either. For sure, it’s a widebody, but it’s also described as a Hellcat Redeye and the badge on the side seems to back that up. We get a little more evidence a little later on too, still we can’t confirm from the grainy video.

At the start of the clip, uploaded to a channel called SRTFlex, the Dodge drives down a road only to make a u-turn and lineup at a stoplight right in front of the camera. Sadly for him, he’s not in the turn lane and this presents a big problem. You see, he wants to make another u-turn so that the person filming can get a sweet shot of him sliding around the corner and flying off into the distance while eight cylinders of glory howl away.

So will he wait for the light to turn green and then let everyone go so that the road is clear for this maneuver? Like a child who doesn’t know or care about the right of way or general road safety, the driver basically bullies his way into the intersection as cars are trying to turn in front of him.

Hilariously, in what must have been blind focus on the cool drift video in his future, he misses the fact that there’s a patrol car in the far lane. Before he can even totally make the turn, the police officer has his lights on and is coming after him for driving into the intersection.

Perhaps it was the sound and sight of the lights that caused him to then slide off the road, over the curb, into the grass, and then back onto the road. Maybe it was the hundreds of wild horses under the hood. All we know is that he slid straight to jail in one smoky sad display of poor judgment.