As Australian states are lashed by torrential rain and rivers break their banks, road users are being reminded that attempting to drive through floodwaters is something that should be avoided at all costs.

Even if you’re in a kitted out four-wheel-drive, driving through flood waters is never a good idea.

It’s a general rule that cars and water don’t mix, and insurers are quick to write off vehicles with water damage. Low-lying electrical components are quickly affected by water, and air intakes that take a gulp of water will destroy an engine in a matter of seconds.

However, cars are replaceable. It’s the people in them that aren’t.

Firstly, floodwaters can hide all manner of nefarious obstacles under the murky waters. It’s quite different to a normal off-road water crossing, and debris picked up and carried by the floodwaters can damage your vehicle enough to stop it dead.

And if you’re stuck fast, then you’re at the mercy of mother nature, and the water level might keep rising.

Secondly, flood waters are often fast-moving, and can easily pick up a car or four-wheel-drive and carry it away. The very nature of floodwaters are dynamic and constantly changing, which means it’s much safer to never enter the water to begin with.

Even though some vehicles might have a decent factory wading depth (or even a snorkel fitted), the internet is littered with examples of capable and accessorised four-wheel-drives being swept away by strong-flowing water. 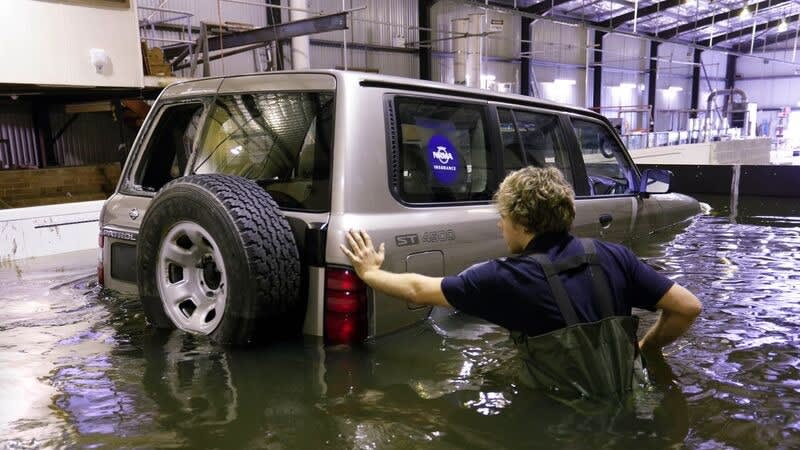 As reported by the ABC last year, a study by the University of New South Wales in 2016 demonstrated that a Nissan Patrol became unstable in 45cm of water, and started to float in 95cm of water.

A smaller Toyota Yaris also began to be swept away by only 15cm of water, moving at 1 metre per second (3.6km/h)

And the third point – which some might not think of – is that emergency services are often stretched to their maximum capacity during natural disasters.

While you might not want to take the long road home, remember: if emergency services are rescuing you, they’re not with somebody who might not have had a choice, and really needs the help.

This story was originally published on 26-March-2021.