Youngsters were issued a Rs 20,000 challan by Ghaziabad traffic police after a video became viral. The video made by a motorist passing by shows two youth on the top of a Maruti Suzuki Ertiga on the public road. The car was in motion.

The video was posted by a Twitter user who tagged Ghaziabad police and showed the registration plates of the car. Ghaziabad Police took cognizance of the complaint received on Twitter. They issued a challan of Rs 20,000 against the vehicle owner for violating the traffic rules.

The 33-second video shows the car moving on a busy road. Two youngsters were dancing on the top of the vehicle. They also took out bottles of liquor while dancing. However, as soon as they realised that someone is making a video, they moved inside the car.

The traffic police of Ghaziabad have also shared a copy of the challan. The challan copy shows various charges including driving without a suspended or cancelled registration, disobedience of any direction lawfully given by the authority, violation of prescribed standards in relation to air pollution and passengers standing dangerously in the car. The car is registered to Mrs Pushpa.

Last year, Ghaziabad Police issued a challan of Rs 62,000 to three youngsters for driving dangerously on the roads. The challan came after a video of the incident became viral.

After the cops watched the video, Superintendent of Traffic, Ramanand Kushwaha said that the police noted down the registration numbers of the vehicles from the video. They tracked down the vehicles and issued multiple challans to the drivers of the three vehicles. 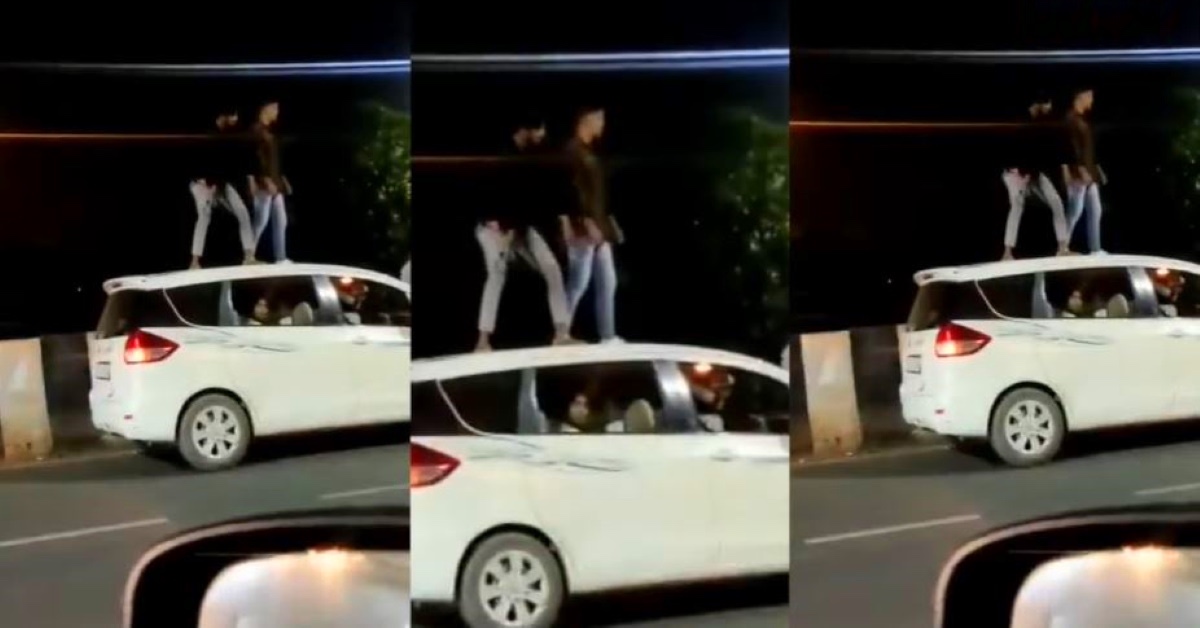 The cops are now using viral videos to issue challans. This is not the first such incident in Ghaziabad where the offenders were tracked using video footage. In the past, two girls doing stunts on Royal Enfield motorcycles and youths doing stunts on Maruti Suzuki Vitara Brezza received challan from the police on the basis of viral videos.

Doing any kind of stunts on public roads is illegal and the violators can even go to jail along with paying massive fines. Doing stunts on public roads can land you in a spot due to various reasons. If anyone wants to practice stunting or want to record videos, it should be done on private property such as race tracks and even farmhouses. Also, one should take note that such stunts are extremely dangerous.

Doing such stunts on the public roads is a sure-shot way to get a challan, especially today when every other person makes a video on their phones. Also, with the CCTV cameras on the roads, it is not a good idea to try out such stunts on public roads.