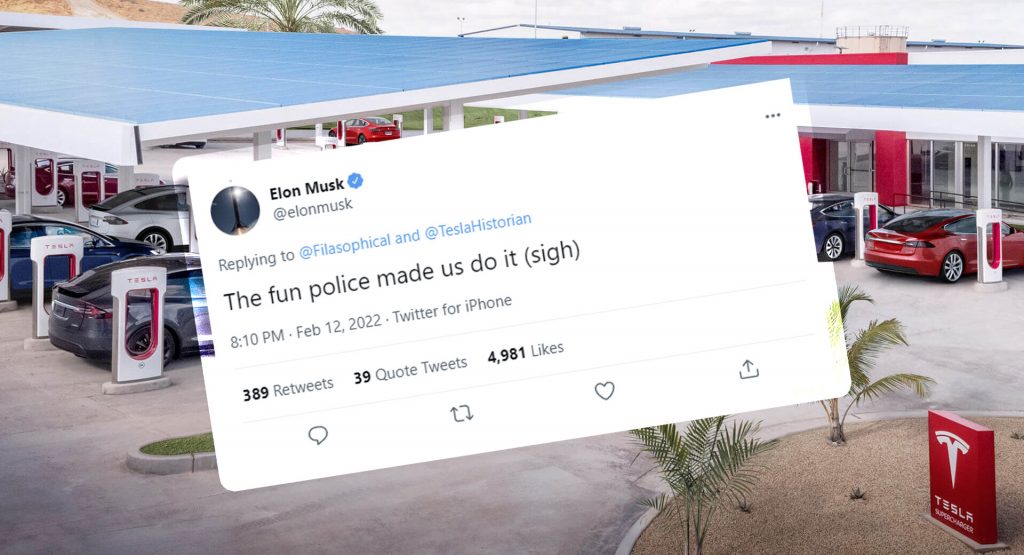 Elon Musk has labeled the NHTSA the Fun Police, as the agency cracks down on Tesla’s Boombox functionality. Musk’s statement on Twitter was a reply to a follower inquiring why the feature had been recalled. The latest recall makes it the 11th in just over three months.

The Boombox feature allowed Tesla users to broadcast sounds through their car’s external speakers. Drivers could use it to play media, such as music, or sound effects to the outside world.

However, the NHTSA’s concerns were to do with the car’s Pedestrian Warning System. All EVs (and some hybrids) are equipped with a warning system that alerts pedestrians to the presence of a moving vehicle. The PWS uses an external speaker to play a warning sound when an EV is in motion. It acts as a substitute for the engine noise of an internal combustion engine vehicle.

Read Also: Tesla Recalls Over 50,000 Vehicles For Software That Lets Them Roll Through Stop Signs

The fun police made us do it (sigh)

The issue with Tesla’s Boombox feature is that it uses the same speaker as the PWS. With Boombox potentially playing a sound that could interfere or overlap with the warning system, the NHTSA started to investigate whether the vehicles complied with the safety standards in place. Tesla has since voluntarily issued an OTA recall that disables the Boombox function while the cars are in drive, neutral, or reverse, reports Bloomberg.

While Musk’s tongue-in-cheek jab at the federal agency may be been in jest, the NHTSA has been subjecting the US automaker to increased scrutiny of late. Reports came out earlier this month of the NHTSA reviewing complaints of “phantom braking,” which is suspected of having something to do with Tesla’s decision to ditch radar sensors.

Other features under investigation include Autopilot, Full Self Driving Beta, and Tesla’s emergency braking system. This saw the regulator recently appoint an expert in the field who has been openly critical of Tesla’s operation. Although neither the automaker nor NHTSA say that Autopilot or FSD makes Tesla vehicles autonomous, critics have argued that Tesla intends it to be a Level 4 autonomous system despite claiming that FSD is just a Level 2+ system.