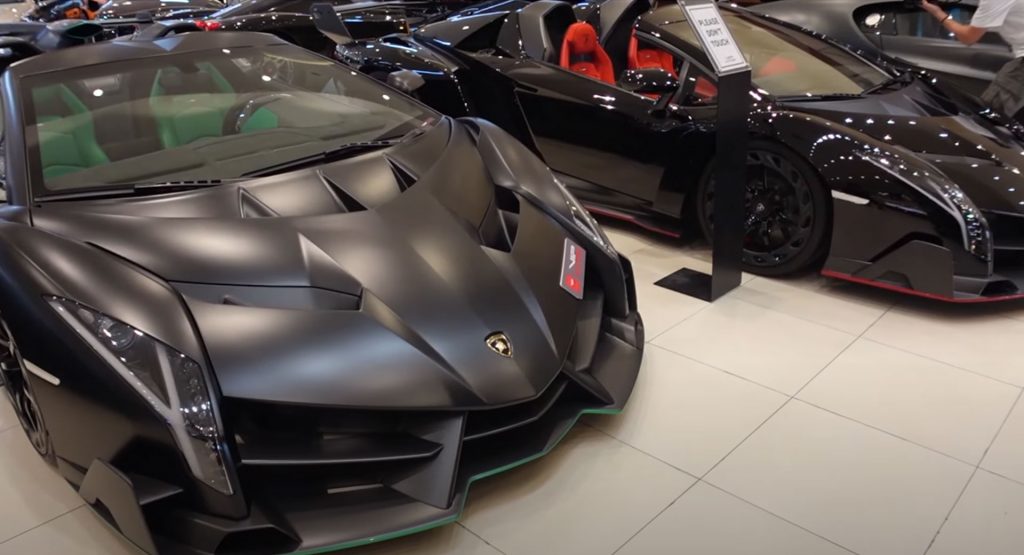 There are just four Lamborghini Veneno Coupe and nine Veneno Roadster models in existence and a dealership in Dubai currently has two of those Roadsters in its showroom.

The dealership in question is dubbed VIP Motors and is featured in the second half of this video from YouTuber effspot, who recently explored the showroom and was left flabbergasted by what he found.

Perhaps the more striking of the two Venenos is painted satin black and sports a host of bright green accents. This car has been all around the globe and once resided in Los Angeles before later being moved to Europe where it was repeatedly seen in Monaco and the UK. Sitting next to the matte black Veneno Roadster is a black example outfitted with a host of red accents, including the interior.

Read Also: This Dealership In Dubai Chock-Full Of Exotics Is Absolutely Jaw Dropping

A multitude of other wild cars are currently on display at VIP Motors, including a particularly infamous Ferrari Enzo. The car in question was split in half after a high-speed impact along the Pacific Coast Highway in Malibu back in 2006 and rather than being scrapped, was sent back to the Ferrari factory where it was completely rebuilt and refinished in a shade of black with a number of exposed carbon fiber parts. It sold at auction for $1.75 million in 2006.

Other cars at VIP Motors include a Bugatti Divo, a Bugatti Chiron under a car cover, at least two Rolls-Royce Cullinans, a number of Range Rover models, various Lamborghini Urus SUVs, and a dizzying number of Mercedes-Benz G-Wagens.

The rest of effspot’s videos includes some car spotting through some exclusive parking garages throughout the city. He also visits Mansory’s showroom, the F1rst Motors dealership, and even finds an abandoned Koenigsegg One:1 sitting in a very dusty showroom also featuring a Lamborghini Aventador and a Ferrari F40.