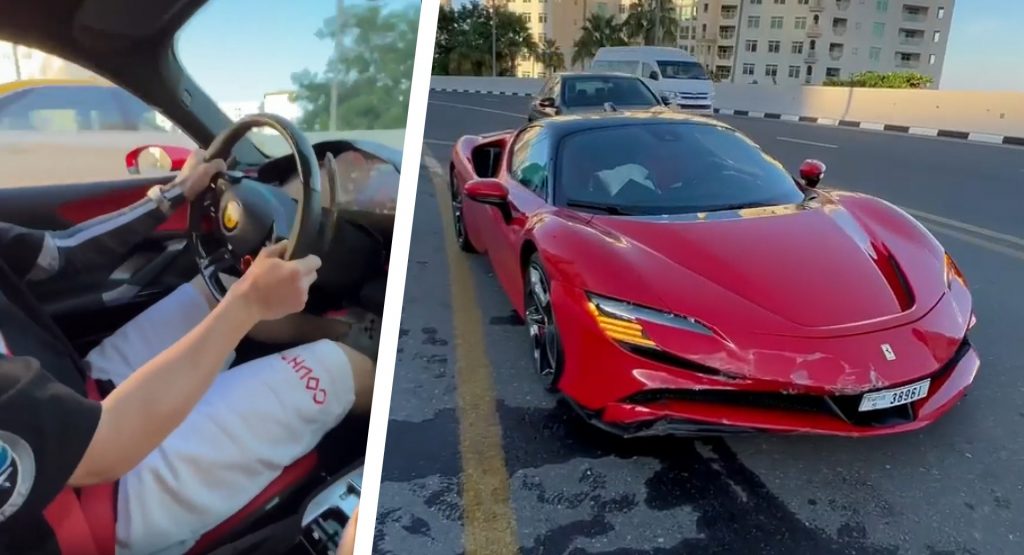 Driving modern high-end supercars you’re not familiar with requires extra care as, with so much power on tap, things can easily get out of hand. That seems to be the case with Ukrainian entrepreneur Alex Slobozhenko, who crashed a red Ferrari SF90 Stradale during a test drive in Dubai.

The accident was captured on video by the co-driver and shows the driver losing control of the supercar due to oversteer caused by heavy acceleration. Thankfully there were no injuries reported and no other cars involved, although the SF90 sustained damage on the front end.

The front bumper is heavily scratched and deformed, with a leak on one side, but the supercar appears to be repairable since the collision with the curb happened at a relatively low speed. Having said that, it is not going to be a cheap bill since a replacement bumper and carbon fiber splitter from Maranello will cost a small fortune.

Alex Slobozhenko posted another video on his channel where he talks about the accident, explaining the circumstances that led to the crash. Unfortunately, the video is in Ukrainian and there is no way for us to translate it. According to the Bulgarian website Automedia, the entrepreneur claims that a technical issue with the car caused the accident. The same source reports that the test drive was arranged in order for Alex Slobozhenko to decide if it was worth trading his Lamborghini Huracan EVO for a Ferrari SF90 Stradale.