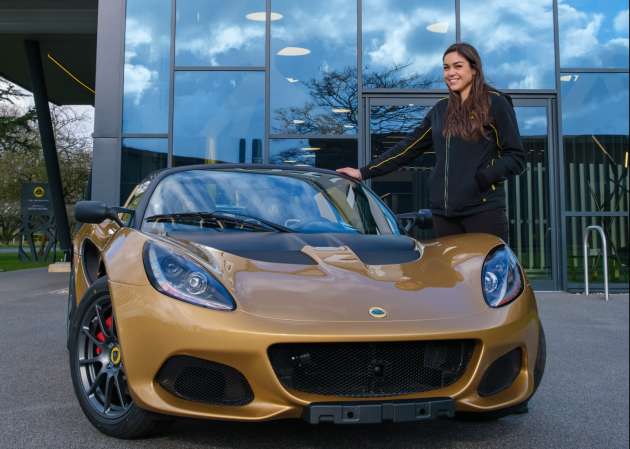 It was the year 1995 when the Lotus Elise was first unveiled to the world, the British sports car maker helmed by chairman Romano Artioli who was also the head of Bugatti at the time. Named after his granddaughter Elisa Artioli, the Elise continued to uphold Lotus’ tradition of model names beginning with ‘E’, such as the Esprit, Elan, Europa and more.

Now, three model generations and 35,124 units later, production of Lotus’ mid-engined four-cylinder sports car has come to a close, and the life of the Lotus Elise has come full circle with the final customer unit going to the person it was named after. This example for Elisa Artioli is a Sport 240 Final Edition, finished in Championship Gold.

In this guise, the Elise Sport 240 Final Edition packs the venerable Toyota 2ZR-FE 1.8 litre supercharged petrol inline-four cylinder engine that makes 243 PS at 7,200 rpm and 244 Nm of torque from 3,000 to 7,000 rpm. This drives the rear wheels via a six-speed manual transmission.

A young Elisa Artioli with the first-generation Lotus Elise, and Romano Artioli

Prior to taking delivery of the Final Edition special, Artioli already owns a Series 1 Elise that was given to her by Romano when she was four, and which she still owns and drives in the present day. Artioli documents her motoring life and travels largely revolving around her mid-engined sports car on her Instagram account here.

The Elise Sport 240 Final Edition that joins it still tips the scales at 922 kg despite the passage of time and accompanying, stricter safety regulations, and can be made lighter still with optional equipment. The Exige and Evora have joined the Elise in coming to an end of their production cycles, marking the end of an era as the Evora’s successor, the Emira made its debut last July.

Meanwhile on our shores, there are two units of the Elise Sport 240 Final Edition which have been brought into Malaysia by official Lotus importer and distributor Lotus Karz, each for the princely sum of RM608,800. One is the orange example seen here, while the other is finished in Azure Blue Metallic.