Toyota’s first production battery-electric car is a large SUV. Should Tesla and Volkswagen be worried?

Portfolio diversification: two words that make investors feel all warm and fuzzy inside, the theory being that if you spread your investments across multiple types of assets, you will get improved returns and lower your portfolio’s risk. In other words, you shouldn’t put all your eggs in one basket.

However, such an approach doesn’t always guarantee success. Take Toyota, for example. For the past few decades, the Japanese manufacturer has taken a cautious approach with its ‘investments’, focusing on hybrid technology, hydrogen fuel cells and, to a much lesser extent, battery-electric vehicles (BEVs). But this conservative BEV strategy has left Toyota having to play an aggressive game of catch-up to compete with rivals like Tesla that have achieved a stratospheric rise in market value in the past two years.

Hence Toyota CEO Akio Toyoda’s announcement last December that his company would be boosting its production of BEVs, with a $35 billion (£25.8bn) investment and a commitment to building no fewer than 15 electrified models.

As development plans go, it’s a bold one, but with Toyota now estimating that increased demand will let it sell three-and-a-half million BEVs per year by 2030, rather than two million, it’s very much a case of now or never. Which brings us to the car we’re driving today: the Toyota bZ4X.

The bZ element of its name refers to the Japanese brand’s Beyond Zero electrification strategy, the bZ4X being the first of seven new pure EVs that will use the moniker; while the 4X denotes its place in the range as a compact SUV, where its numerical digit is sourced from the equivalent-sized Toyota RAV4.

The bZ4X even shares styling cues with the RAV4 (which has recently been made available with a plug-in hybrid powertrain), with its chunky black wheel-arch trims, contrasting roof and familiar silhouette. If you look closer, though, you will also be able to pick out new design details, including hammerhead-inspired air intakes, a subtle black ‘grille’ (which houses the various driving sensors) and sharply styled headlights that point to a different design language for the bZ range.

Also unique to the bZ4X is its all-new e-TNGA EV architecture. It has been developed in collaboration with Subaru (whose first e-TNGA-based EV will be the Solterra SUV), and Toyota says the stretched platform gives the bZ4X a spacious cabin and rear leg room comparable with the near-900mm offered by the flagship Lexus LS luxury saloon.

We will see if those numbers stack up later on but, on paper at least, they put the bZ4X and its Subaru sibling in direct competition with electric SUVs including the Kia EV6, Skoda Enyaq iV and Volkswagen ID 4. 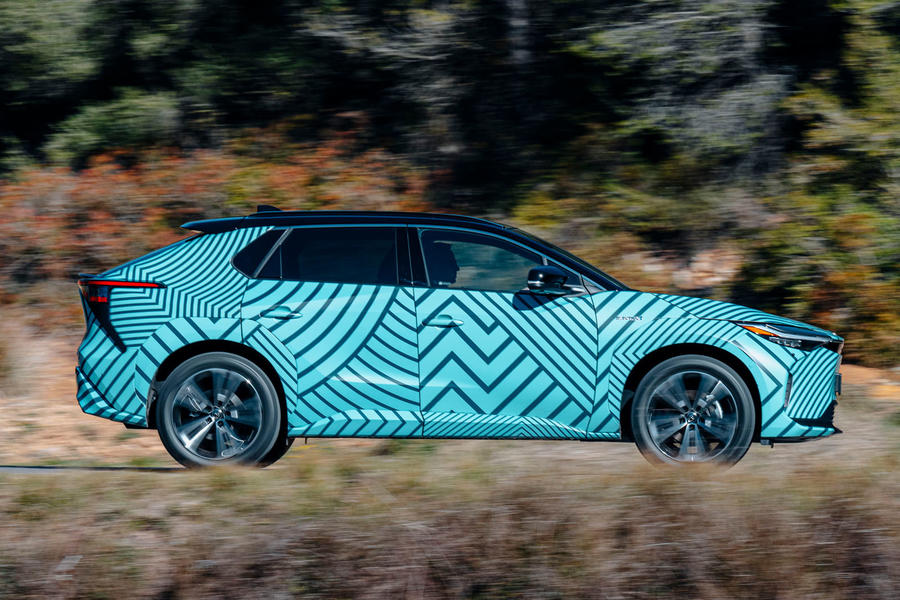 Two power outputs are offered from launch. The front-driven, single-motor entry-level car has 201bhp and 195lb ft of torque for a 0-62mph time of 7.7sec. The twin-motor, four-wheel-drive range-topper increases power to 214bhp and torque to 248lb ft, cutting the 0-62mph time to 6.9sec.

Power comes from a 71.4kWh battery pack, which promises a provisional WLTP range of more than 280 miles in the FWD car and over 255 miles in the 4WD model, while a standard-fit heat pump should ensure only a modest drop in range in sub-zero temperatures. We should point out, though, that those figures are respectable but far from groundbreaking. While the entry-level Enyaq iV 60 has a 256-mile range, the EV6 and Tesla Model Y can both manage more than 300 miles officially.

The bZ4X’s maximum charging rate of 150kW is also a little underwhelming for a clean-sheet design (an 80% top-up should take less than 30 minutes), especially when you consider that the EV6 and Model Y can both be charged at more than 200kW.

We had the opportunity to sample a pre-production version of the twin-motor range-topper, and while it lacks the neck-snapping accelerative force of the Model Y and EV6 AWD, you won’t find it lacking in punch off the line. It’s only as the speed rises beyond 70mph that the rate of acceleration starts to ease off compared with those rivals.

This easygoing power delivery encourages you to drive the bZ4X in a more relaxed manner, which suits its personality down to the ground. Compared with the Model Y and even the mild-mannered EV6, the bZ4X’s suspension is noticeably softer, giving it a more pliant and supple ride both around town and at higher speeds.

The downside to fitting relatively soft suspension to a relatively upright SUV is, of course, increased body roll in the corners, but the bZ4X felt surprisingly at home on the tight and twisty country roads just outside of Barcelona. Body movements, while noticeable, remained well controlled, while a reassuringly consistent brake pedal gave us the confidence to cover ground at a reasonable pace. 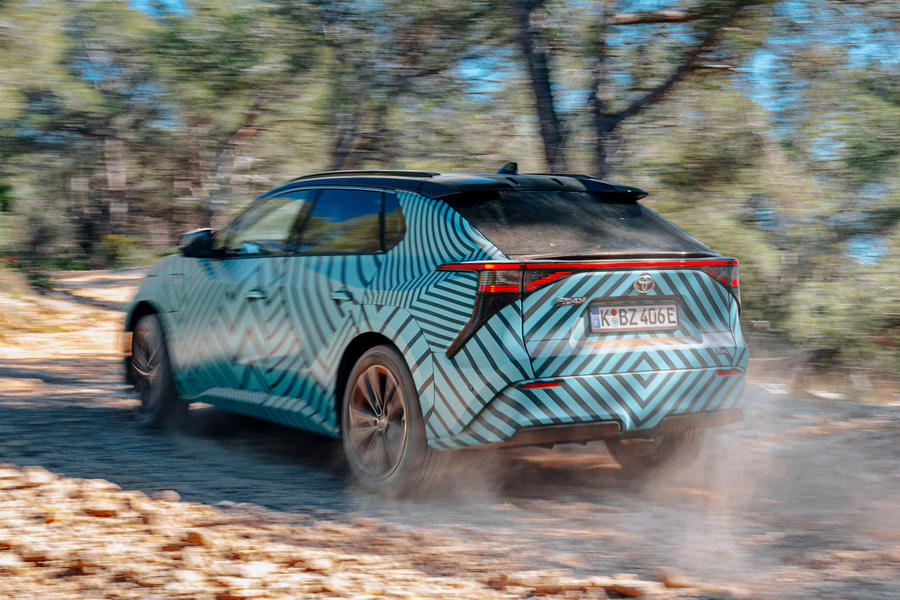 Sadly, we didn’t get to sample the bZ4X with Toyota’s intriguing steer-by-wire system, which supposedly gives you full lock with just a 150deg turn of the accompanying (and yet to be signed-off) Tesla-inspired yoke. We can assure you that the standard system feels naturally weighted and progressive, though.

We should point out at this point that the bZ4Xs we were driving were described by Toyota as hand-made pre-production prototypes (hence the camouflage) and not fully representative of the cars we will get in the UK. Truth be told, aside from a bit of buffeting generated by the side mirrors and a whistle from the panoramic sunroof, the cars, dynamically at least, felt very close to being production-ready. This was especially the case when it came to sampling the various off-road systems fitted to the bZ4X.

This might look like the very definition of a soft-roader, but it benefits from a version of Subaru’s X-Mode terrain-control system, which allows it to overcome deep snow, mud and other obstacles. We tested these systems, including the bZ4X’s Jeep Renegade Trailhawk-rivalling 500mm wading depth, on a challenging off-road course, and the way the 4WD system manages to find grip in the muckiest of situations is truly impressive, with the twin-motor drivetrain sensing slip and metering out power to each wheel as needed. And while ground clearance over particularly severe obstacles is more of a limitation when things get really rough, we can confidently say that you’re not going to get stuck in your local National Trust car park any time soon.

Things continue to impress inside the cabin. You’re met with exactly what you would expect from a next-generation Toyota. The materials, while perhaps a little sombre-looking, are plush and well screwed together, while a low scuttle gives an open and airy feel to the interior.

Our only real complaint is the slightly awkward driving position, which places the instrument panel high up on the dashboard and the steering wheel low – a set-up very reminiscent of Peugeot’s i-Cockpit. We suspect the layout has been designed with the optional yoke in mind, because the top of the regular steering wheel cut off the lower part of the dials for this (admittedly vertically challenged) driver.

Naturally, you get cinematic levels of touchscreen with the bZ4X’s huge (12in) landscape-oriented interface. Wireless Android Auto and Apple CarPlay will come as standard, as will EV-specific features showing driving range, driving support and charging station details. Again, the pre-production system in our test car lacked these features, but we can happily tell you that the screen itself is graphically sharp and quick to respond to inputs.

In the rear, two tall adults have limo-like amounts of leg room on account of the bZ4X’s unusually long wheelbase, while a flat floor will even make a third occupant feel fairly at ease. However, it does appear that this fantastic rear passenger space has been made at the expense of luggage space: at 452 litres with the rear seats in place, the boot is some way behind the 490 litres offered by the EV6 and the colossal 585 litres offered by the Enyaq. You don’t get the benefit of a front trunk (‘frunk’) as you do in the Model Y, either. 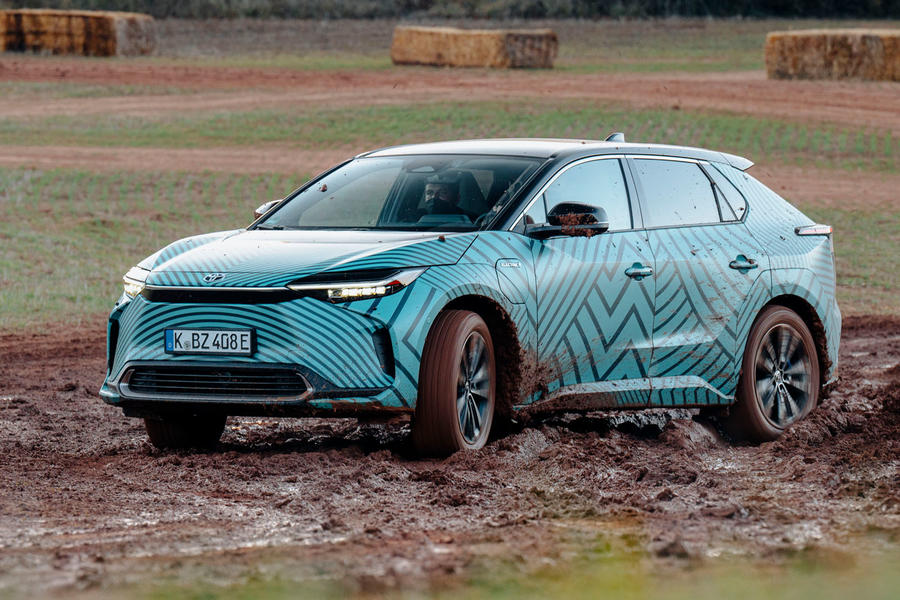 So where does that leave us, then? Well, even in pre-production form, the bZ4X feels like a credible addition to the electric SUV ranks. It rides well, has a spacious and well-screwed-together interior and comes with the reassurance of Toyota’s legendary reliability (Toyota guarantees that the battery pack will still operate to 70% of its original capacity after 10 years). But is that enough to make an impact in an already mature class? Well, that will ultimately depend on the final numbers.

You see, Toyota has yet to homologate the bZ4X’s range figures, but as it stands, they’re some way short of its closest rivals’. And while Toyota has confirmed that it will be offering a competitive full-service leasing package when the car goes on sale later this year, for those looking to buy outright, pricing for the 4WD model currently starts at £48,350, making it a shade more expensive than a 300-mile-plus-capable Enyaq iV 80 AWD or EV6 AWD.

That’s why we’re keen to sample the entry-level FWD bZ4X. It might not have the mud-plugging abilities of its bigger brother, but with a greater range and a more competitive price, it could be a strong contender in this fiercely contended class.