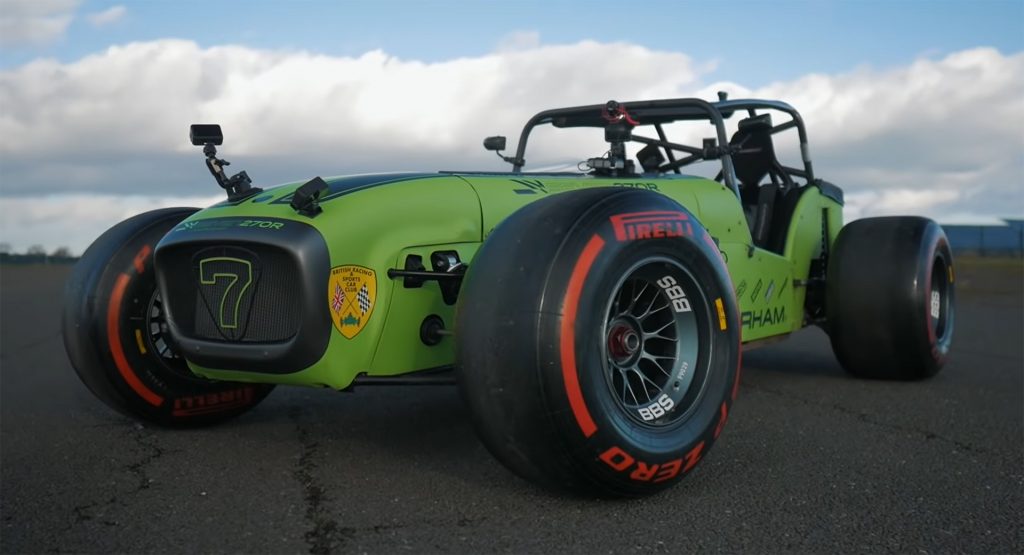 Even without their incredibly advanced aerodynamics that help them stay glued to the track, Formula 1 cars still have immense amounts of grip thanks to their specialized tires. Based on that, you’d think that any car wearing these tires would be significantly quicker around a track than with normal ones. However, Driven Media actually tried the experiment in real life, and as it turns out, that actually isn’t the case.

The team managed to get a set of official F1 slicks from Pirelli and threw them onto a Caterham 270R, but the task of getting them to fit was a challenge in itself. In order to get the center-lock wheels to mate to the Caterham’s 4-lug hubs, they actually created their own custom adapters, a task that supposedly took weeks of measuring, drawing, and machining to achieve the desired result. And we must say, of any car to put F1 tires on, an open-wheeled one like this 270R is certainly one of the best ones you could choose.

See Also: How Formula 1 Tires Have Evolved To Become Faster And Faster, Until They Became Slower

Something else to keep in mind is that even though it’s road-legal, this car is a fairly capable track toy to begin with, so it would stand to reason that the F1 tires should only boost its performance further. However, as mentioned before, that, unfortunately, wasn’t the case.

The reason for this lies in the operating temperature of the tires. In order to extract their maximum performance, the slicks have to be running at around 100°C (212°F), but the catch is that they’re actually worse than normal tires when not at this temperature. For reference, the average car can barely crest that number even during heavy track use, which is why the Caterham looks as if it was driving on ice despite the team’s best efforts to pump as much heat as possible into the F1 rubber.

We won’t spoil the exact results of the tire test, so to see them in action for yourself (as well as how they fare on city streets), you can check out Driven Media’s video below.

H/T to The Drive