The Suzuki RE5 was a Wankel rotary-engined motorcycle developed in the early 1970s. It was to be a showcase the future of Suzuki’s motorcycle division but it would quickly turn out to be an expensive and public failure, losing the company millions of dollars and resulting in many thousands of unsold bikes.

In more recent years the surviving examples of the Suzuki RE5 are being increasingly sought out by enthusiasts and collectors who appreciate the engineering that went into the design, not to mention the Giorgetto Giugiaro styling and good handling by the standards of its day.

For the uninitiated, the Wankel rotary engine was developed by German engineer Felix Wankel, he first patented the design in 1929. in the 1950s, after WWII, he began working for NSU (NSU Motorenwerke AG) and by 1957 he had a working prototype.

Above Video: This 3:25 minute film by Matt Rittman shows how a Wankel engine works. It starts with engine assembly and names all of the major parts, then shows how they all work together.

Unlike the more common Otto Cycle engine that uses pistons, connecting rods, valves, and cams, the Wankel rotary uses a triangular rotor that spins in a chamber.

On paper at least, it does appear to be a superior design due to the small number of moving parts and the remarkable simplicity of the design, but persistent issues including poor fuel efficiency, higher emissions, and wear-prone apex seals have limited the widespread adoption of the technology.

That said, it’s important to note that far less money has been spent on Wankel engine development than on standard Otto cycle engine development, and with comparable investment it’s likely that many of the issues could have been solved or significantly reduced.

The Wankel engine does remain in limited production today, Mazda has a team working on it, and over in the United Kingdom the former Norton rotary engine engineer Brian Crighton has developed the Crighton CR700W – a 220 bhp rotary motorcycle that is currently in production. 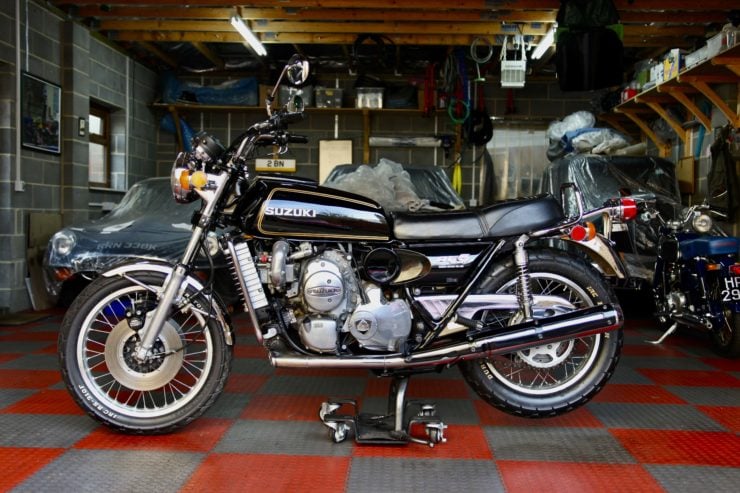 With the exception of that unusual engine, the rest of the Suzuki RE5 is relatively standard for the era, including the duplex cradle frame, twin rear shock absorbers, and the front disc/rear drum brake arrangement.

The Suzuki RE5: History + Specifications

In the late 1960s and early 1970s many car and motorcycle manufacturers were looking around for the next big thing. Some experimented with electric drivetrains, some with gas turbine engines, many invested heavily in two-stroke engine development, and a few experimented with Wankel rotary engines.

On paper, the Wankel looks like the perfect engine for motorcycles. They’re exceptionally simple with no valves or cams, very few moving parts, and a remarkably low weight compared to a traditional four-stroke engine of the same capacity.

Executives at Suzuki invested heavily to Wankels, licensing the technology from NSU and spending millions of dollars developing a production-ready engine. They filed a number of new patents and built and entire production line specifically for their planned line of new Wankel motorcycles.

Suzuki engineers developed an ingenious though complicated single rotor engine built in unit with its 5-speed gearbox. It had water and oil cooling, a two-stage Mikuni carburetor, a CDI ignition, a wet multiplate clutch, and apex seals made from sintered ferrous alloy and titanium carbide. 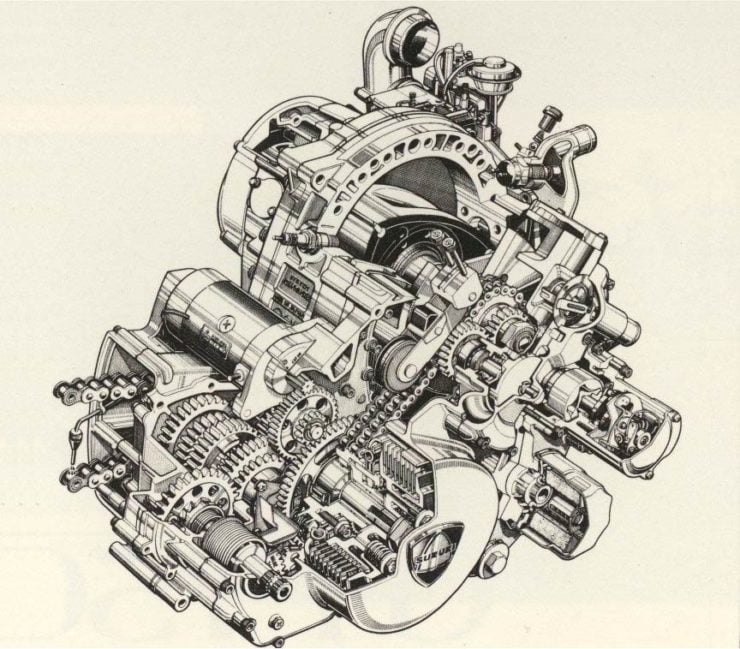 This is a cutaway illustration of the RE5 engine, you can see the single rotor on the left side feeding power to the gearbox by way of a duplex chain, and from there to the final drive by way of a regular chain.

Suzuki had developed the RE5 not as a superbike or a racing motorcycle but as a touring bike, a new frame was developed and paired with a relatively standard suspension arrangement for the time – telescopic forks up front and twin shock absorbers at the rear.

Period magazine reviews complimented the Suzuki RE5 on its handling, it had excellent braking ability to match thanks to its dual front discs and rear drum.

The End Of The RE5

The reviews were as complimentary about the motorcycle’s weight, tipping the scales at 573 lbs (260 kgs) ready to ride (with fluids). The general consensus was that the RE5 was too expensive, too heavy, and not powerful enough.

Sales were exceedingly poor for the new model, vastly below Suzuki projections for the series and it was scrapped after just two years with thousands of unsold bikes around the world. 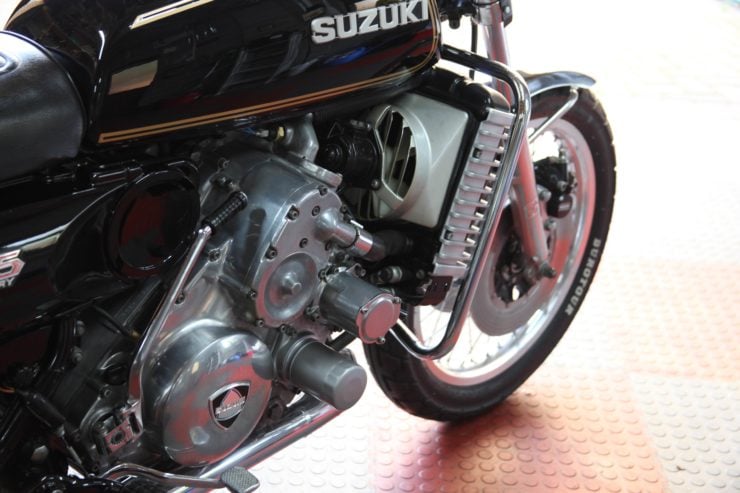 The large radiator was a necessity due to the fact that rotary engines tend to run hot, exhaust gasses can reach close to 1,000 ºC (1,832 ºF).

Rumors persist that Suzuki sent much of the equipment and my of the unsold motorcycles out to sea and had them dumped off the coast of Japan – but no confirmation of this story has ever been found.

Many modern riders have been drawn to the unusual RE5 after discovering that if you use the bike for its intended purpose, cross-country touring, it’s actually an excellent machine. Many haven’t survived after years of neglect, but those that have now demand a price premium.

The Suzuki RE5 you see here is a low mileage survivor from 1975, it has just 12,500 miles on the odometer and remains in excellent condition throughout.

This bike was sold new in the USA before being imported into the UK more recently by its current owner, being registered for the road for the first time in England in April 2021.

It’s currently part of the seller’s motorcycle collection, and it’s been decided to slim down the number of bikes so this one is being offered for sale in a live online auction on Car & Classic.

If you’d like to read more about it or register to bid you can click here to visit the listing. 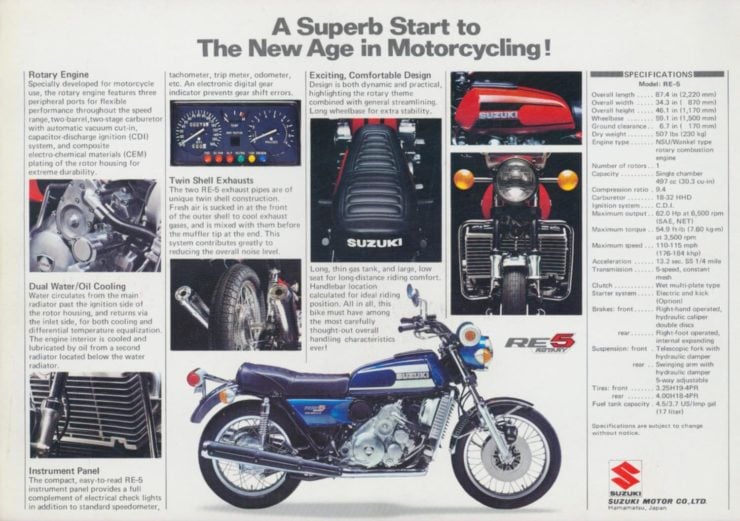 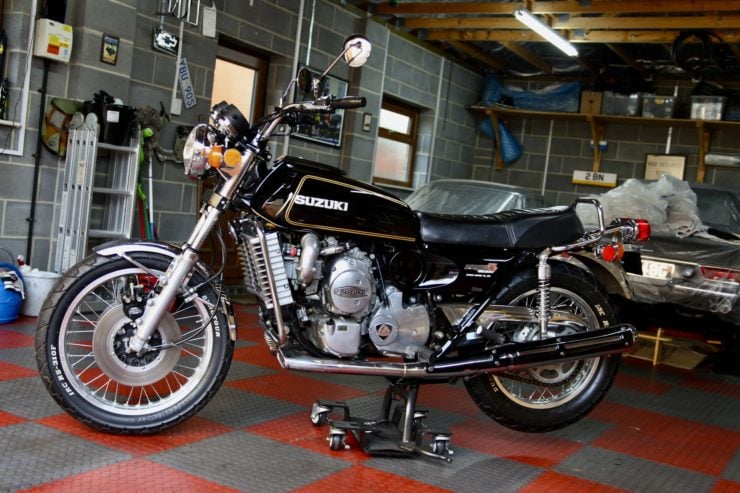 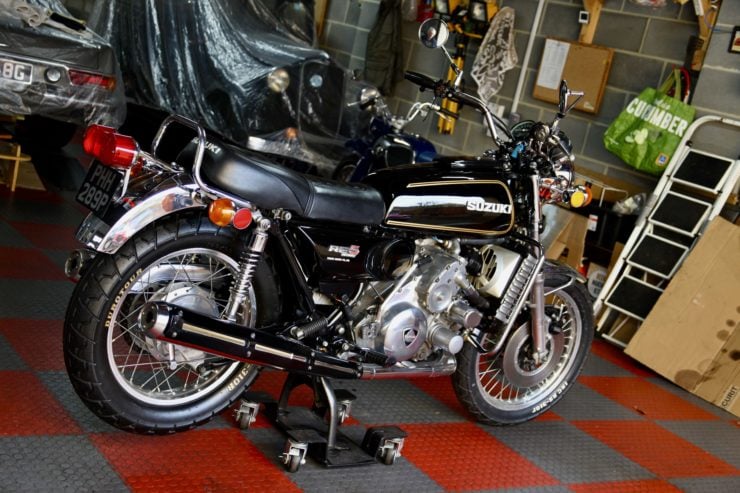 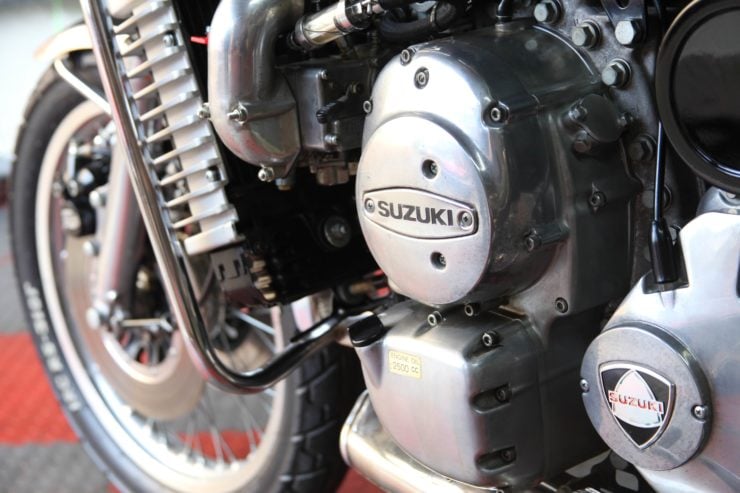 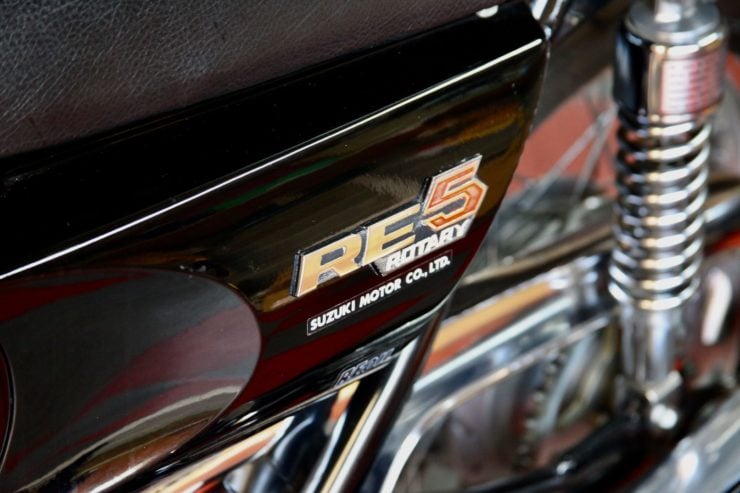 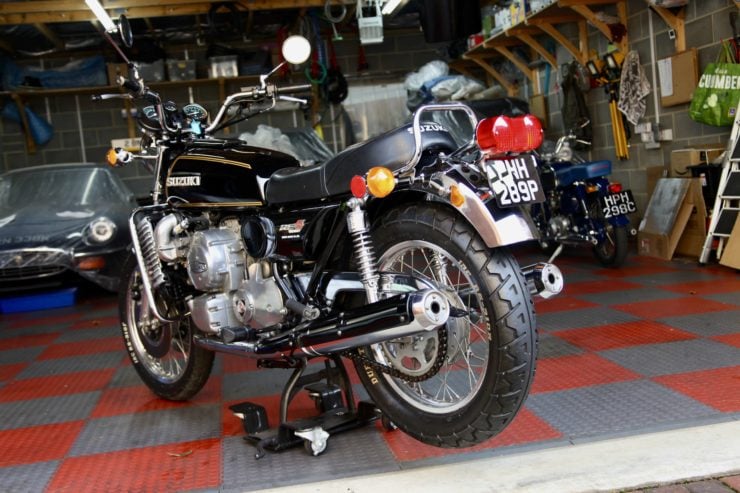 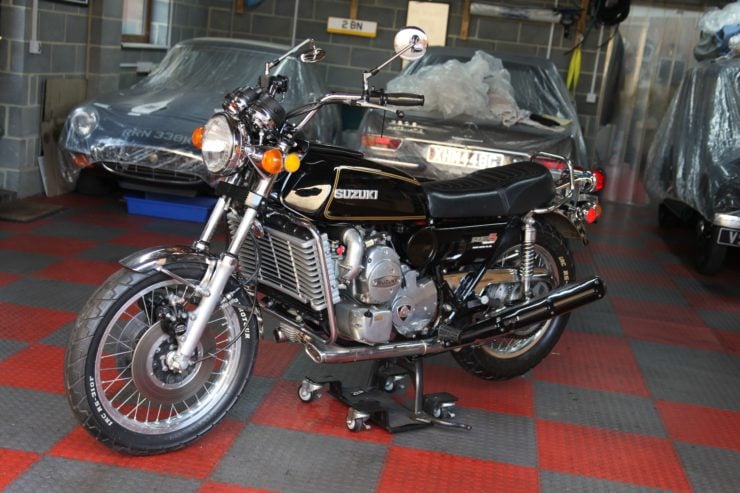 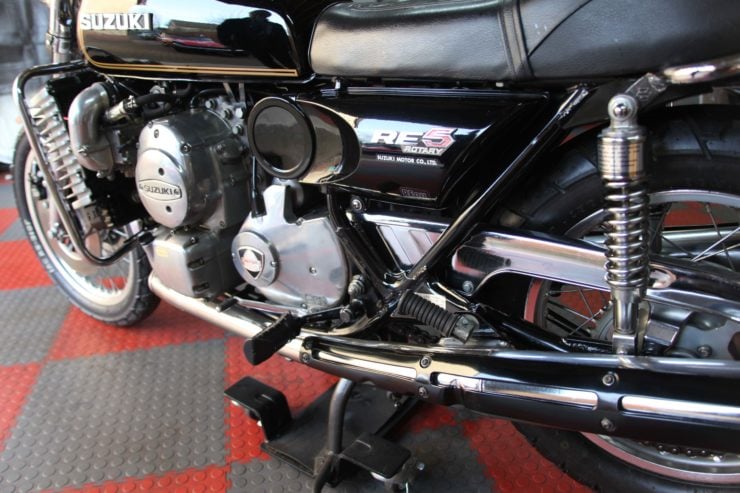 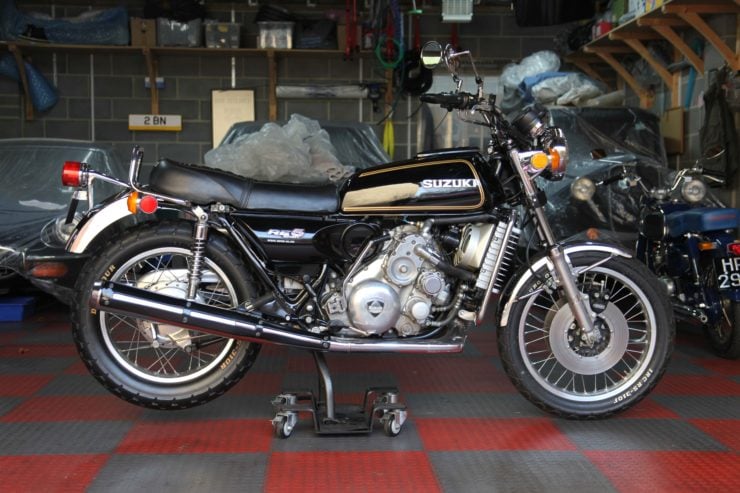 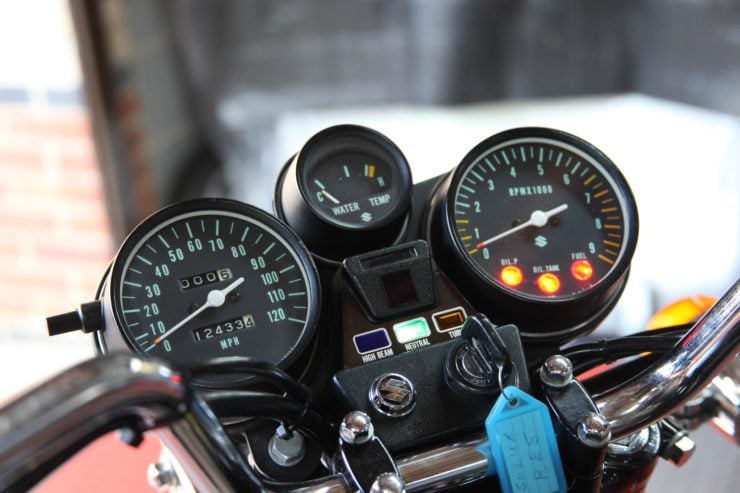 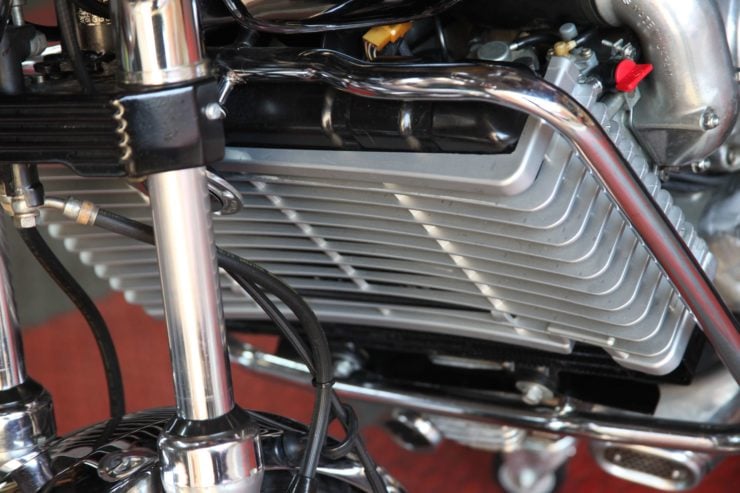 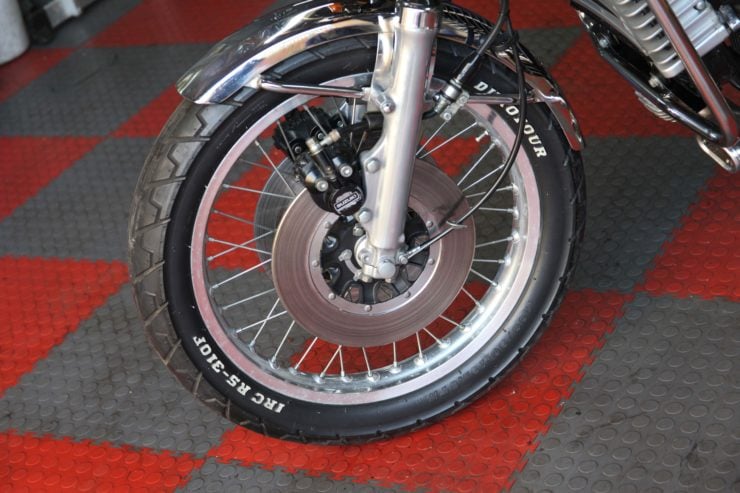 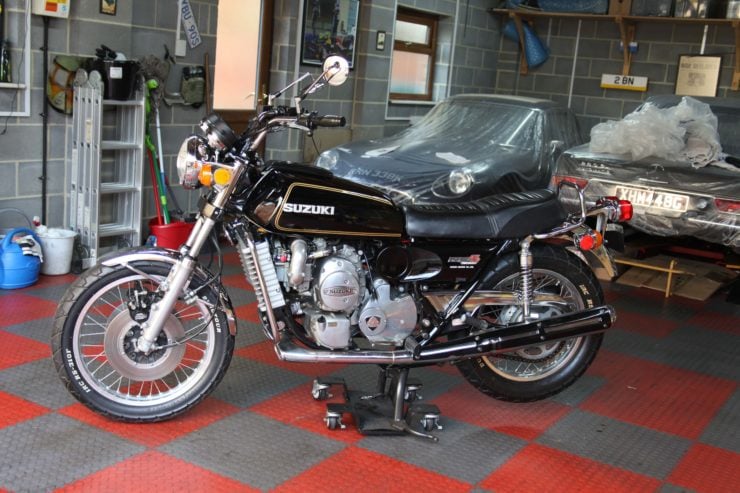 The post For Sale: A Suzuki RE5 Wankel Rotary-Powered Motorcycle appeared first on Silodrome.