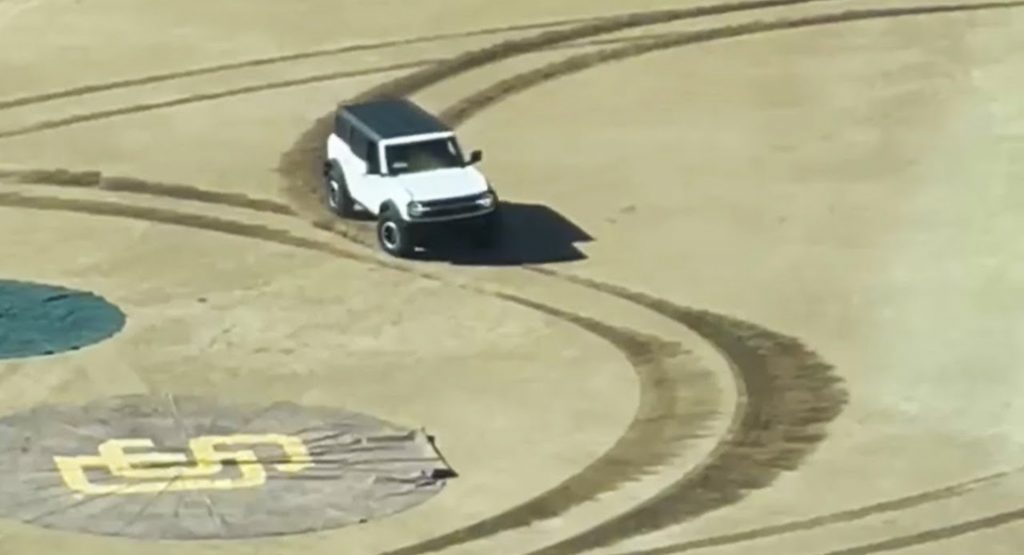 A Ford Bronco driver ended up in a police cell after horsing around in a MLB baseball park and tearing the ground up with his SUV.

While that might sound like the kind activity that would happen at 3 am on a Saturday night after a frat party, this incident at San Diego’s Petco Park occurred at 10 am on a Friday morning. Which could be why one witness told the city’s Union-Tribune newspaper that he presumed the stunt had to have been officially sanctioned by the San Diego Padres.

Petco Park had been used to host monster truck rallies and dirt bike races during January, after all. But this definitely wasn’t an organized joyride. Video footage shows the driver of the five-door Bronco carving up the dirt, which had recently been prepared for the installation of its grass baseball pitch surface, before staff bring a stop to the party.

Crew getting ready for the return of baseball to the ground after a long break jammed the entrance to the field tunnel with a small forklift, blocking the Bronco’s only means of escape.

“After about a minute, he came to a stop, and a bunch of the grounds crew guys made their way to the car and did like a citizens’ arrest,” witness Ryan Carlson told the Union-Tribune. “It happened peacefully, wasn’t aggressive, at least as far as I saw. They walked him over and sat him down.”

One of the videos recorded by Carlson shows the driver sitting in the dirt near his Bronco SUV, while three park employees stand over him. Sand Diego Police didn’t release the name of the driver, only confirming to the newspaper that “someone drove onto the field of Petco Park and caused some damage,” and that they were arrested for felony vandalism.

According to California law those charges could land the driver with a worst-case three-year jail sentence, and a fine of up to $50,000. Petco Park grounds staff, meanwhile, are looking at a rather shorter timeframe to get the ground back in shape. The San Diego Padres are due to host the San Francisco Giants in 2022’s opening game on March 31.