Ford Endeavour was one of the most popular full size SUV available in the Indian market. Ford officially left Indian market and so these models have also been discontinued. Endeavour is still a commonly spotted SUV on our roads and it is an absolute favourite among people who like off-roading. It is a capable off-road SUV and we have seen several videos of the same online. Endeavour is also a modification friendly vehicle and a there are several aftermarket accessories available in the market. Here we have a video that shows a heavily modified Ford Endeavour SUV with modification worth Rs 8 lakh installed in it.

The video has been uploaded by Arun Panwar on his YouTube channel. In this video, vlogger talks to the owner of the Ford Endeavour about the modifications that are done to the SUV. Starting with the front, it gets a gloss black front grille. The stock headlamps have been replaced with tri-projector LED aftermarket headlamps. The stock bumper on this SUV has been replaced with an off-road bumper from Hamer. A set of imported auxiliary lamps have been installed on the off-road bumper. Other than this, a faux hood scoop has been installed which gives it a muscular look.

A metal skid plate and a set of projector fog lamps have also been installed on this Endeavour. The main attraction on this Ford Endeavour is the wrap. It gets a Satin Black metallic wrap which gives it a butch look. The owner mentions that it is a project car and they have not finished with the modification work. Some of the parts that are ordered for the SUV have not arrived yet. The owner has also upgraded the suspension set up and the stock alloy wheels on this SUV have been replaced with 20 inch all black alloy wheels with off-road tyres. 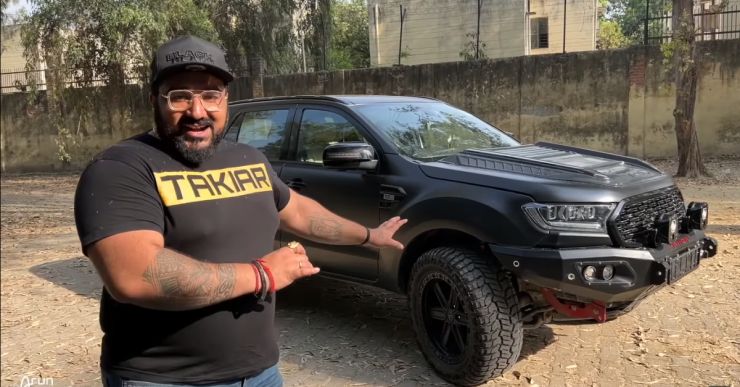 Owner mentions that he used to own a Fortuner but, in comparison to that Ford Endeavour feels a lot more comfortable to drive with aftermarket wheels. The ORVMs also gets aftermarket LED turn indicators and puddle lamps. Coming to the rear, the original bumper is retained but, a metal tow bar is installed with a tow hook in it. The work done on this SUV looks very neat and definitely looks butch. This is a 2017 model 3.2 turbo diesel 4WD version. The engine has received Stage 1 remap and the car now generates 230 Bhp. Aftermarket exhaust from HKS and an air filter from K&N.

The cabin in this SUV looks stock but, the owner has unlocked some of the features on the instrument cluster that are only available on international variants. The touchscreen infotainment system theme has also been changed. A boost gauge has also been installed on the dashboard. Other than this, the cabin looks stock. Owner mentions that he has plans to customise the interiors in future. With all these modifications in place and the Satin Black wrap, the Ford Endeavour looks butch and definitely has a gangster car like vibe. Approximate cost of modifying this Ford Endeavour is around Rs 8 lakh. It is definitely going to make people turn their heads whenever it is on the road.