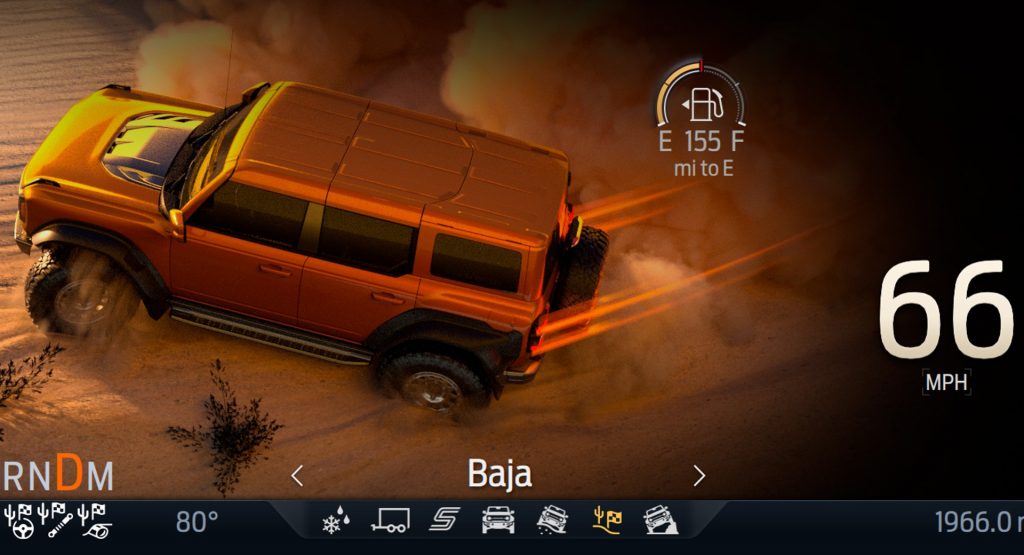 When customers take delivery of their all-new 2022 Ford Bronco Raptor they’ll be greeted by an all-digital 12-inch driver information display staring back at them in the driver’s seat. Those who have seen the cluster of the F-150 Raptor will recognize the system but now it’s been tailored to the four-door Bronco SUV.

Each one of the seven different G.O.A.T. (Goes Over Any Type of Terrain) modes gets its own unique graphics and dynamic animations. In fact, in what seems to be a growing trend in the industry, many of the graphics were created by former video game developers.

It’s not just about flashy animations though. Ford wants these graphics and the information provided in the gauge cluster to create “potential for an even smarter Bronco Raptor with more capabilities and off-road features with Ford Power-ups.”

That’s the language Ford uses to describe its over-the-air update capability so there’s a chance that we don’t even know about some future features that might be in the works.

Either way, the ones that will ship with the 2022 Bronco Raptor seem pretty good on their own. Each one shows the vehicle in a graphical setting appropriate for the mode and also shows a representation of which setting the steering, suspension, and exhaust are in.

Another feature called “Exclusive Performance View” will highlight key performance metrics so that the driver can get the most out of their vehicle. In the cluster, drivers will see the redline move to the 12 o’clock position, while the gear state and engine speed will each be highlighted.

“Performance View changes a driver’s impression of how to use the vehicle, with an intuitive layout that puts redline at the 12 o’clock position and uses a drivetrain avatar to really get the focus on optimizing the performance of the drive,” said Mark Sich, Ford’s digital design manager. “The entire focus is to provide the driver with important information as efficiently as possible.”

We love to see companies releasing serious performance vehicles that are actually meant to be used enthusiastically. If we’re actually anywhere near the end of the internal combustion engine, cars like the Bronco Raptor sure seem to be a proper send-off for it.