Quattro four-wheel drive is synonymous with Audi. How does the newest halo model stack up to the original legend?

Quattro: it’s a simple enough word. But those seven letters conjure up some of the most era-defining images in the automotive world: Walter Röhrl and Hannu Mikkola sideways on a world rally event, Gene Hunt in the BBC drama Ashes to Ashes or, more recently, Ken Block’s Hoonitron.

And then there’s the Mr Jones moment, where most of suburbia is crowded with four-wheel-drive versions of an Audi saloon outside an identikit home.

That last point is really the crucial one here, even if it is the most mundane. Despite Audi using the Quattro four-wheel drive system across the vast majority of its range, including in its humdrum 2.0-litre family saloon, the name still brings with it an air of mystique.

Essence d’Röhrl is infused across every Quattro-equipped Audi on every driveway or street corner, but with none of the brand dilution that you’d expect. Somehow Quattro stands for performance and allround capability and marks an aspirational moment in any company car executive’s career, despite Audi liberally sprinkling it across all sorts. BMW and Mercedes-Benz can’t get anywhere close to it.

So it is that we find ourselves in the windy Fens trying to answer a question: what does Quattro mean? In terms of bookends, we’ve got the perfect pair here in the shape of both the original and the latest. If anything is going to demonstrate the changing shape of both Quattro and the automotive world, it’s these two.

The original is the Quattro 10v, a road car that’s directly linked to the rally equivalent. In fact, it preceded the legendary Group A machine, coming as it did at the 1980 Geneva motor show and ahead of the rally car’s debut in autumn of that year.

The latest is the E-tron GT, Audi’s flagship battery-powered sports car that, unless you’ve been buried under a rock for the last year, you’ll know is based heavily on the smash-hit Porsche Taycan EV. 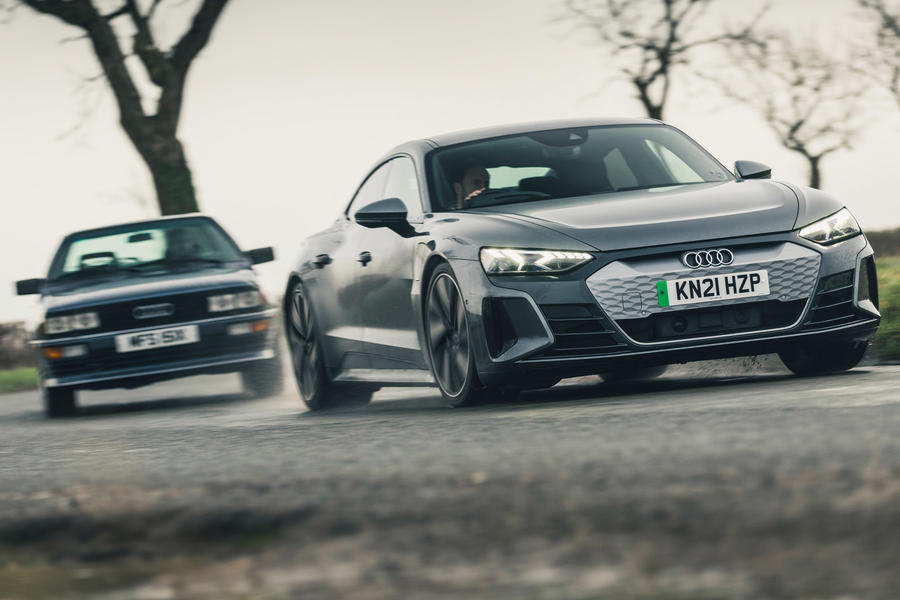 Both of these run a Quattro four-wheel drive system and both represent the epitome of accessible performance that’s been a hallmark of Quattro since 1980. And although the E-tron GT is going to struggle to match the star-studded legacy of the Quattro, coming as it does among a raft of electric performance cars, its launch was still quite the moment for Audi: if a brand’s halo car can be electric, it’s obvious which way the wind is blowing.

First, though, the Quattro. It defined the genre so it makes sense to start with it and see if its traits follow through to the E-tron GT, more than 40 years later. When a car is this full of character, it’s difficult not to get a bit grumpy-old-man about the state of the world today: why can’t everything be so much fun? From the trigger-style door handles to the five-cylinder thrum, you know the journey is going to be special.

That thought is only reinforced as you slide into the seats and grip the thin, perfectly round steering wheel. Brown velour seats, I should add. It’s the essence of the 1980s expressed as furniture fabric.

Key turned, throttle lightly prodded to get a bit more fuel into the pistons as the starter motor turns over, and then it’s running, smoothly puttering away with a hint, but not overly so, of five-cylinder character.  That comes later, when you stretch the revs and that unique sound filters back into the cabin.

It’s not loud or uncouth – that’s not really the Quattro’s style – but it’s enough to let you know there’s something interesting going on under the bonnet. That and the turbocharger whistle from the KKK blower as you lift off to shift ratios through the five-speed manual gearbox.

Pace isn’t outrageous – 0-62mph takes 7.1sec thanks to 197bhp and 210lb ft – but it’s incredibly effortless. Frequently, if you’re driving an old car among modern traffic, you feel outclassed, as if the world has suddenly got an awful lot busier and time-pressured, but the Quattro doesn’t suffer from that.

With a flexible torque curve and minimal turbo lag, allied to the slight 1287kg kerb weight, it’s a remarkably easy car for any trip. These days, it’s no longer a supercar-baiter (back in its heyday, it rivalled the Ferrari 308 GTB for acceleration), but it’s more than capable of keeping up on motorways and A-roads. 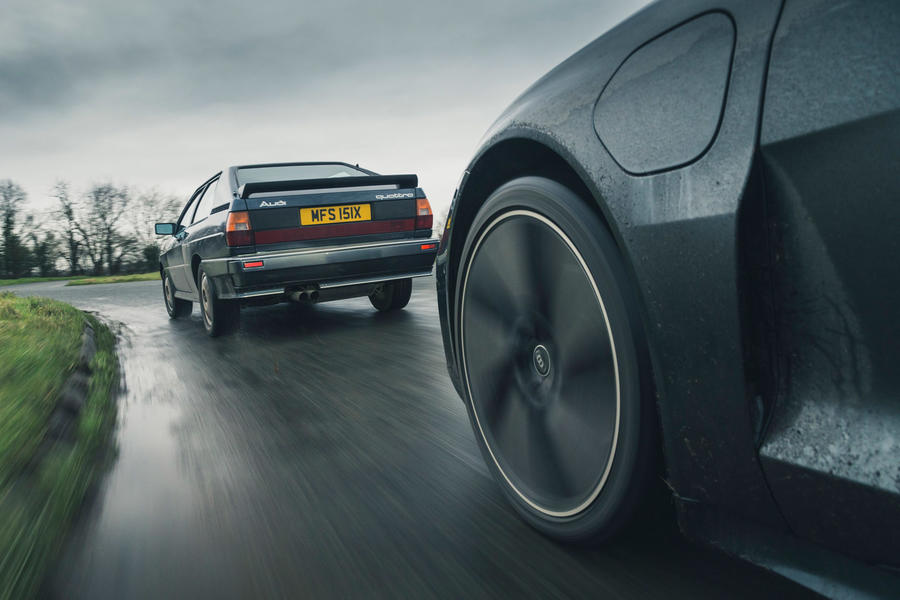 B-roads are where it’s at, though, with delicate steering and balanced handling. Given that the car rides on relatively high-profile 205/60 R15 tyres and the engine’s weight is beyond the front axle, it shouldn’t come as a surprise to learn that turnin isn’t the sharpest. It feels a bit more rear-biased as you aim for the apex, like the rear is squatting down and doing most of the control and the front tyres merely guiding.

That’s not to say it feels insecure or wayward. The hydraulic power assistance is spot on, with the sort of feel that a modern system would do well to remember. This level of connection is reflected in the brakes as well: with discs all round (ventilated at the front), the Quattro stops well but also transmits all that information back to the driver.

The four-wheel drive system is a mechanical, three-diff affair, with the centre and rear diffs being lockable and controllable from inside the cabin. The clever bit is the hollow shaft design, a drilled-out secondary shaft within the transmission that transferred power to the diffs and meant additional drive shafts and heavy transfer cases were obsolete. It’s light and tension-free, too, so a huge bonus in rallying. As you’d expect, traction levels are impressive, even on otherwise intimidating frosted back roads.

The Quattro is now 40 years old, but it’s refreshing to drive a car with no fripperies. If it’s needed to make it go, stop or steer, it’s there, but everything else is a bonus – including the slightly wonky recording of David Bowie on the tape deck.

The same couldn’t be said for the E-tron GT. With the Quattro, any long journey would have meant packing a box full of cassettes; now you have the choice of 50 million songs from just a single phone. But criticising the E-tron GT for offering what the modern driver expects really descends into crusty old git territory. So let’s find the similarities, because they are here. 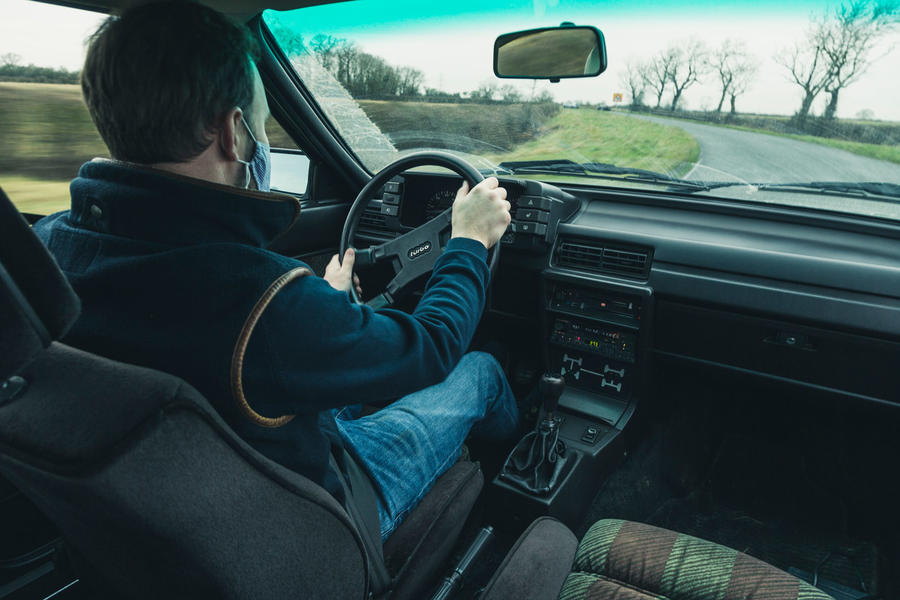 The effortlessness of pace links the two. Neither is a car that needs to have its neck wrung. Some performance cars make you feel alive, but to drive them fast you have to concentrate so hard that you look like a bark-chewing lunatic. The Audis’ easily accessible turn of speed is different. In that sense, they’re both a GT, calmly allowing you to go about your day with minimal fuss.

The E-tron GT’s instant torque helps, letting its driver pile on speed with a still frankly staggering ease, but you feel it in the Quattro, too. Both cars will slot into your life with barely a shrug, adapting to what you want rather than the other way around. Awkward compromises are few and far between.

It’s arguably what has defined Quattro throughout the ages. Yes, some of Audi’s performance models have been more unhinged – the C5 RS6 Plus springs to mind – but fundamentally they’ve all helped rather than hindered.

Even the ride quality is largely decent. The GT rides on whopping 21in wheels, but with the optional, three-chamber air suspension (thank you, Taycan), it flows across the asphalt far more smoothly than you’d expect. The Quattro lacks this sophistication, but it’s no wooden board, either.

You’re not as keyed into the road surface quite as much with the E-tron GT (although it’s impressive against most EVs), but you’ll still feel like a hero driving it. Flattery is the name of the game, albeit with a sharper turn-in from the modern car. Thanks to its torque vectoring, you can really feel the car’s considerable mass rotating around you, with the rear actively pitching itself into the apex. In a way, it’s vaguely similar to the Quattro, with both cars’ backsides being more involved on turn-in than you’d imagine.

The expectation was that this test would be a tale of two cars separated by a chasm of 40 years and countless technological upgrades, yet the fact that we’re not dismissing any sort of common thread out of hand speaks volumes. Would we be feeling the same link between a four-wheel-drive 1980s BMW and a modern xDrive version? Possibly, but Audi has got the heritage and it has stuck to it.

There’s still something special about those seven letters. “You bought an Audi? Oh, the Quattro version…” The knowing nod between colleagues, mates, neighbours is still the same 40 years on. 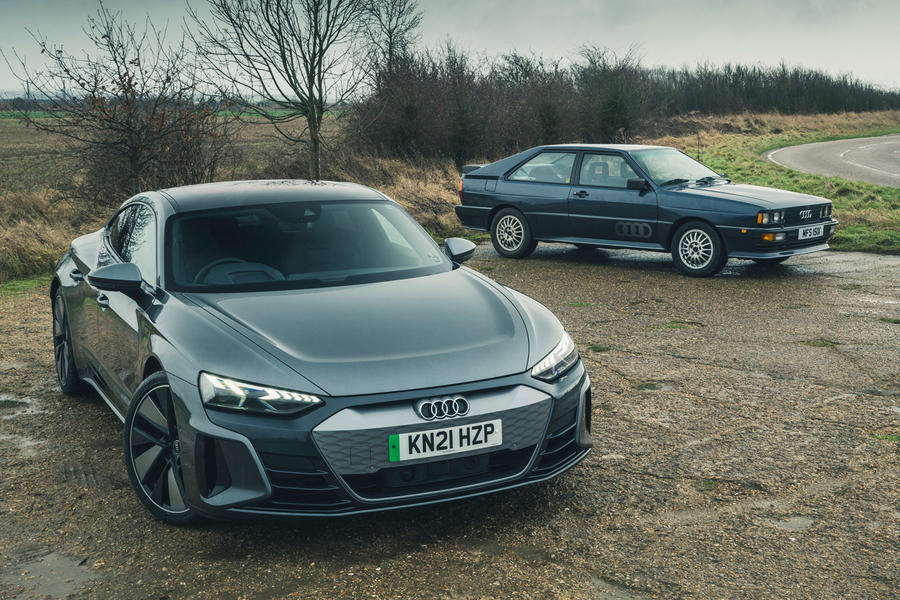 Oddly, given its current ubiquity, four-wheel drive was banned in rallying until 1980. The Volkswagen Group sneaked the rule change past the other manufacturers, thanks to the sleight of hand that was the Volkswagen Iltis (a bizarre Dakar special that other makers believed was the reason for the request), and the Quattro LWB – for long wheelbase – was born.

Its first appearance was as a course car at the 1980 Algarve Rally, where Hannu Mikkola covered the timed stages 30 minutes faster than the eventual event winner. In 1981, it won second time out in Sweden (and had been 2.5sec per kilometre faster at the Monte Carlo round, before a crash), then won in Sanremo and the UK. There were seven wins and a manufacturers’ title in 1982, Mikkola won the drivers’ title in 1983, then in 1984 Audi won both titles.

The final iteration was the bonkers Sport Quattro S1 E2, which wore a rear wing to rival the most outrageous 1980s shoulder pads. It was one of the ultimate Group B pin-up cars but only won once, with Walter Röhrl in Sanremo in 1985.

Audi 80 (B4): The 80 spanned four generations before it was replaced by the A4, but it’s the B4 we’re interested in. It wasn’t the first 80 to get four-wheel drive, but it was the first model to really introduce the brand to the chattering classes.

Audi RS2 Avant: The godfather and the first RS. Costing a punchy £45k new, it was based on the 80 but heavily fettled by Porsche with a 2.2-litre five-pot engine and a KKK turbo that was 30% larger than the S2’s. Fast estates haven’t been the same since.

Audi S8 (D2): The D2 was used for the car chase in Ronin, and therefore no further discussion is really needed. It had 335bhp to begin with (later 355bhp). Based on the A8, which was made from plenty of lightweight aluminium, it was the ultimate sleeper.

Audi RS4 (B7): The RS2 launched the brand but the B7 RS4 did most to cement it. With a bellowing V8 up front, plus the choice of saloon, cabriolet and Avant bodystyles, it brought the Quattro mantra of accessible performance to the masses.

Audi RS6 (C6): Yes, we know later V8-powered RS6s are faster, but no Quattro list is complete without the only RS6 with a V10. On sale at the same time as the equally bonkers V10 BMW M5, it was the high watermark for unusually powered ‘family’ wagons.

Audi R8 V8: Audi’s dominance at Le Mans started in 2000, so it made sense for a road car to celebrate. The R8 became the ‘everyday’ supercar, on account of its effortless usability and excellent grip. The click-clack manual gate was a highlight.