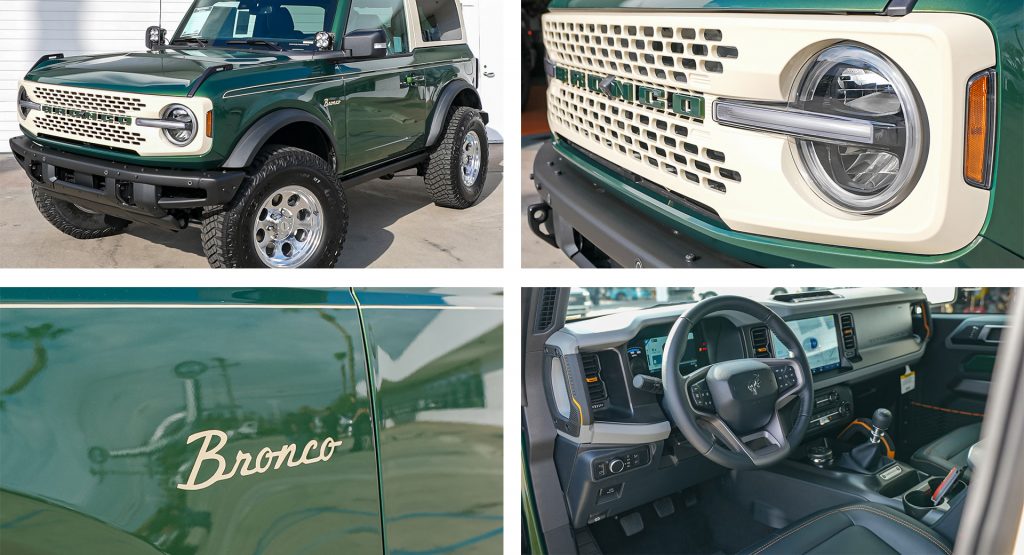 There’s a lot the Ford Bronco has going for it, including good off-roading abilities and impressive on-road manners. It also has a lovely retro-inspired design that has no doubt helped it become as popular as it is. This particular Bronco is particularly retro.

This Ford Bronco was recently tweaked by the team from Galpin Auto Sports and left the factory painted in Eruption Green, one of the off-roader’s most intriguing colors. The owner then tasked Galpin with painting the Bronco’s roof, front grille, and badges in a color dubbed Avorio Beige, an intriguing Ivory shade lifted from the Ferrari palette.

Elsewhere, the Bronco now sports pinstriping down both sides, new Bronco lettering, and a tweaked Ford badge at the rear. Galpin has also slotted on a set of 17-inch Pro Comp Series 69 polished wheels wrapped in the standard 35-inch Goodyear tires. A pair of small LED A-pillar lights from Baja Designs have also been fitted.

Read Also: Retro-Styled Ford Bronco Built For SEMA Can Now Be Yours

No alterations appear to have been made to the interior of the Bronco which is a bit of a shame as the bright orange accents found throughout look a little at odds with the exterior finish of the Ford.

This is far from the only retro-themed Ford Bronco that we’ve seen an aftermarket firm build in recent weeks. In early February, a particularly striking Bronco Black Diamond was unveiled by Air Design USA and finished in a bright shade of blue with white across the wheel arches, side skirts, front bumper, front grille, and roof. It was even rocking white Forgiato wheels.

However, our favorite retro Bronco was built by Rabid Customs back in January. Like this Bronco from Galpin, that one was painted in Eruption Green and had cream-colored accents applied to the wheel arches, rock panels, hood, and had its own set of pinstripes running along the doors.