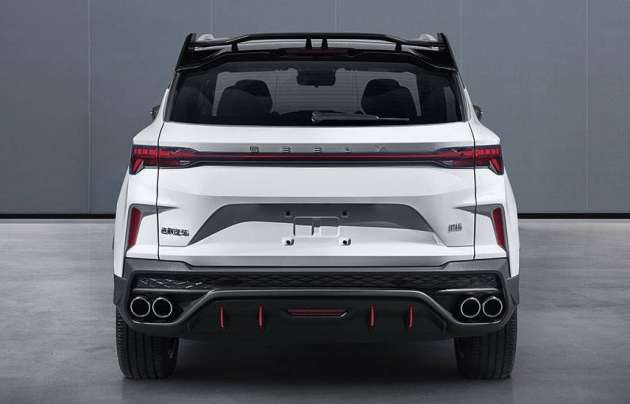 The Geely Binyue, the base for Malaysia’s Proton X50 and the Philippines’ Geely Coolray, is getting another facelift in China. The last nip and tuck for the B-segment SUV happened in July 2021, when the Binyue Pro received a “black X” on the face. This one is a development of the 2021 look, but with major changes at the back and under the hood.

These government filing images show a rather comprehensive facelift that’s more than just a bumper change. While the X-look is still on, the facial features are sharper than before and the black portion bigger, with a honeycomb mesh pattern throughout. Note the slimmer and sharper headlamps that pierce deep into the front wing, compared to the abrupt chop of old. The curved bonnet edge has been replaced by a straight line.

We can also see a new LED daytime running lights pattern, which is dashes on the top, eyebrow style. Red pinstripe accents can be found on the border of the upper grille – which itself is slimmer than before, following the headlamps – and on the front lip. There seems to be three different shades of red, from dull to bright – does this denote the power/variant? 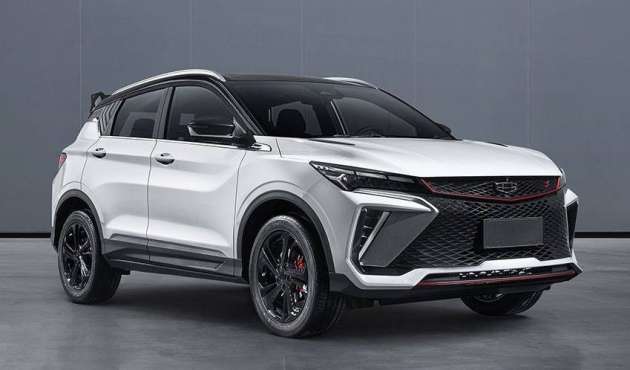 This super aggressive look is bolstered by what appears to be vents on the bonnet. There’s also a small “tail” for the chrome underline of the glasshouse, where the A pillars are. The “bridge” where the side windows meet the rear glass has some lines on it – stickers?

It’s at the rear end that the biggest change lies. It’s a complete revamp, with a sharp look replacing the original car’s organic and flowing lines. Once again, the lights are very slim now and they’re connected, since full-width tail lamp signatures are in-trend now. What does this look like to you? Lexus UX, Hyundai Elantra or something that escaped us?

While the original number plate recess was in the same “floor” as the lights, it’s now positioned lower, flanked by reflectors with sharp cutouts. It’s now a very distinct three-level layout, and the ground floor, so to speak, is the black diffuser part. Now, there’s a strip of mesh above the quad tailpipes and the rear fog lamp is a slim unit. Beside the latter are red accented diffuser fins. Like before, there’s an elaborate wing with sharp horns.

As if that’s not a big enough change, the 2022 Geely Binyue is said to come with a new four-cylinder engine. Still displacing 1.5 litres and with a turbocharger, the four-pot is set to replace the 1.5T three-cylinder as the top engine for the SUV. This BHE15-EFZ engine reportedly makes 181 hp, which is a few horses up on the current TGDi’s 177 hp/255 Nm range-topper. Why the change? We’ll have to wait for an official word from Geely – this car is yet to be launched.

So, what do you think of this heavily facelifted Geely Binyue and its new four-cylinder engine? It’s very aggressive, isn’t it? The original Binyue/Proton X50 is already a highly stylised car (we can’t think of many cars with more exhaust tips than cylinders) but this revamp is on another level, with more sporting cues than many true hot hatches. Check out last year’s facelift below.

The post Geely Binyue gets heavy facelift in China, less than a year after the last one – 1.5T 4-cylinder engine, 181 hp appeared first on Paul Tan’s Automotive News.