America’s Most Beautiful Roadster is a title given to just one roadster per year and is considered one of the two highest hot rod award honors in the world. Given out at the Grand National Roadster Show in Pomona California, an event that originally started up north in Oakland, there are a select few cars that each year enter to be considered for the AMBR award. It’s like an Oscar, only harder to win and there aren’t different ones for different classes. There is just one. Roadsters, of all kinds, compete against each other to be named the most beautiful roadster in all of America for that given year. The budgets for these builds can vary wildly, but the most expensive of them have price tags in the seven-figure range for their builds. Regardless of the price, being up for the competition is something to be proud of on its own.

Below you’ll find all of the contenders for 2022’s America’s Most Beautiful Roadster, and a gallery full of images of all of them below that. Enjoy!

The Cusey Roadster – Bob Owen’s Cusey Roadster was originally built in 1961 by Ian Cusey and features all original 1932 Ford sheetmetal, the original chassis with the typical dropped axle and split wishbone, plus a few upgrades like a 283 Small Block Chevrolet. It was restored by Jamie Johnson and the guys at Hot Rod Haven, with the interior getting some love from Baskis Auto and Ron Mangus, and the bodywork was done by Sean Sena and paint by Jamie Johson. It’s an epic and classic hot rod, and we dig it for sure. 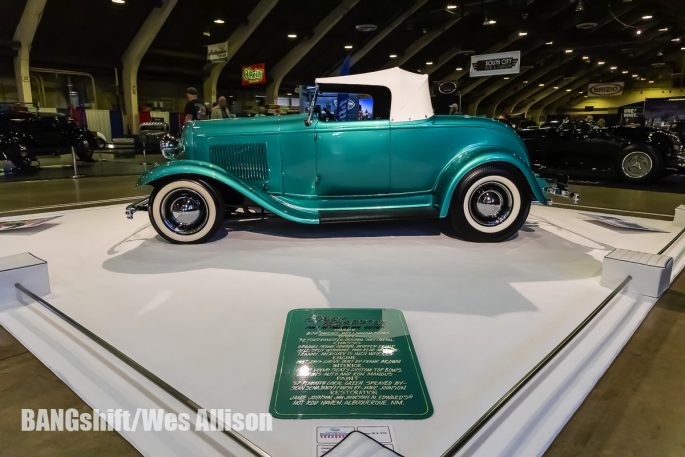 The Full Circle 1932 Ford owned by Kevin Williams is an ultra-clean full-fendered hot rod that we would drive in a heartbeat. This is the kind of hot rod I’d like to own. Built by New Metal Coachworks, with interior by Chris Plante, this one is special because it has the iconic look we all love in a 1932 Ford. 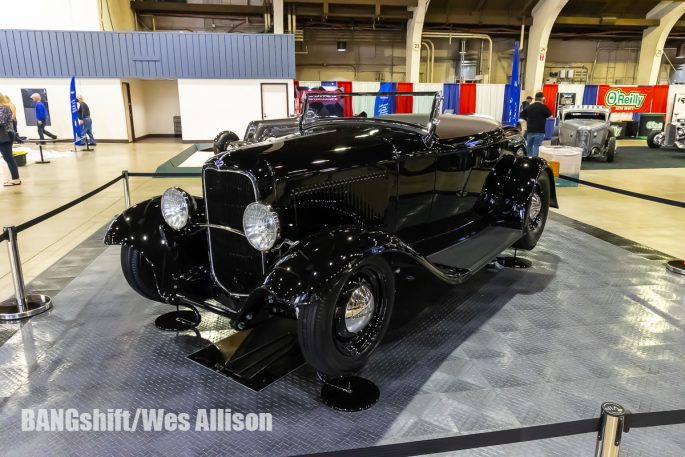 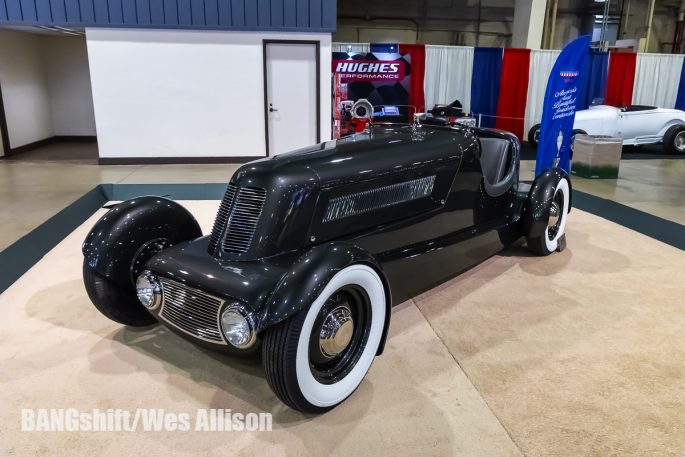 The Root Bros 1928 Ford Model A Roadster is an open-wheel, racer-inspired, hot rod that will speak to any fan of speed and power. It’s small-block powered, has some real miles on it already, and was designed, built, and painted by the Root Brothers with interior by Nathan Stewart. It’s cool, it’s fun, and it’s classy all at the same time. 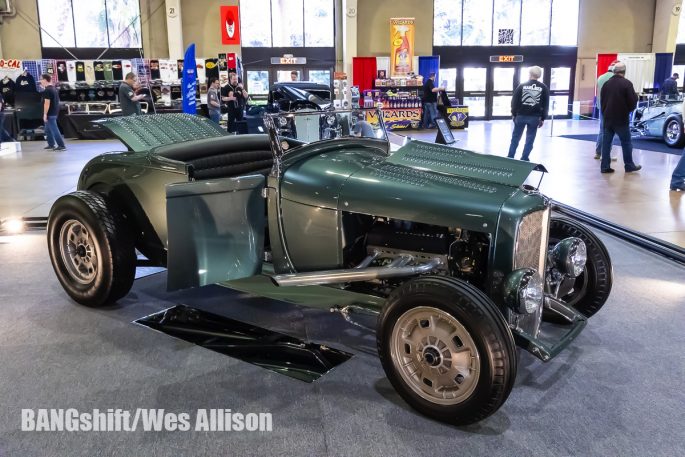 The Original Dick Williams Roadster, now owned by Ross and Beth Myers, was America’s Most Beautiful Roadster in 1953 and has been faithfully restored by Roy Brizio Street Rods. Body and Paint was handled at Vintage Color Studio, with Sid Chavers handling the interior and Sherm’s Custom Plating making sure the chrome was on point. It’s powered by a 1948 Mercury that was rebuilt by H&H Flatheads. This one is special because of its history. Can it win again nearly 70 years later? 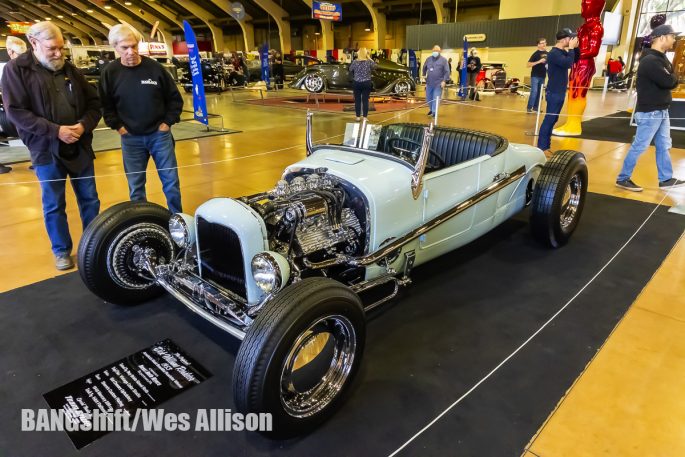 Blackmagic, owned by Edward McSweeney, is a 1927 Ford that has a completely hand-built body that was shaped by Terry Hegman and fabricated by Richard Wells. It’s got a tube chassis, the body has been channeled, and it is powered by a DOHC Lincoln V8. Paint is by Albert Rodela, Upholstery by Gabe’s, and polishing by Dave Segal. There are plenty of other custom touches on this one, and it’s pure show car through and through. 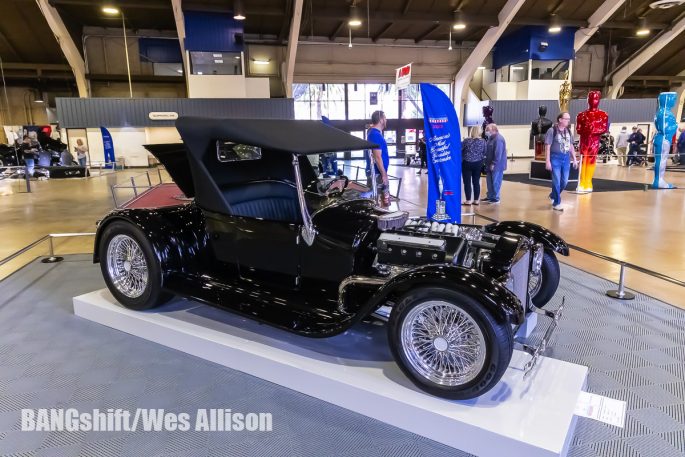 Sage, the 1935 Ford Roadster built by Lakeside Rods and Rides, is owned by Joe Faso and is one of the smoothest renditions of a 1935 Ford ever. Smooth is the only way to describe it as everything on it has been smoothed and moved, and tucked to be the best shape possible without losing its identity. It has a custom Roadster Shop chassis, features Ridetech Air Ride, the best parts, and fit and finish like none other. Check it out. 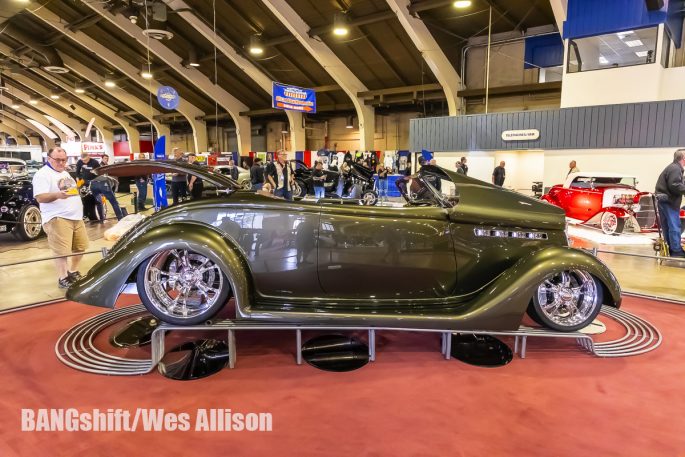 Squeeg’s Roadster, owned by Squeeg Jerger, is a Brookville bodied traditional custom roadster that would have looked at home at this show 50 years ago as well. All the metal work, paint, etc was done by Doug Jerger and it’s got the best parts and pieces along with chrome from Royal Plating, Interior by Brian Willingham, and the chassis all done by Vintage Parts of Arizona. This one is cool personified. 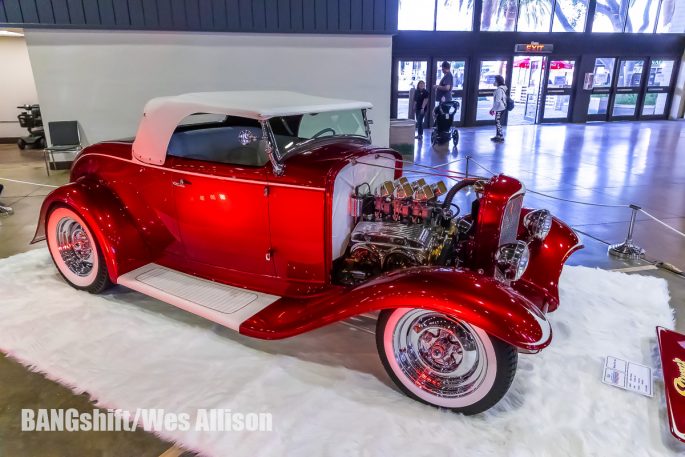 The Dooling Roadster is one pretty technical piece of artwork. Built by Joe Dooling, it has a completely custom Dooling chassis that features torsion bar suspension and all titanium fasteners. Advanced Plating made the shiny chrome parts stand out among all the other features and details, and this is a car that feels like an old racer but with the most modern race-inspired technology too. It’s trick, that’s for sure. Look. 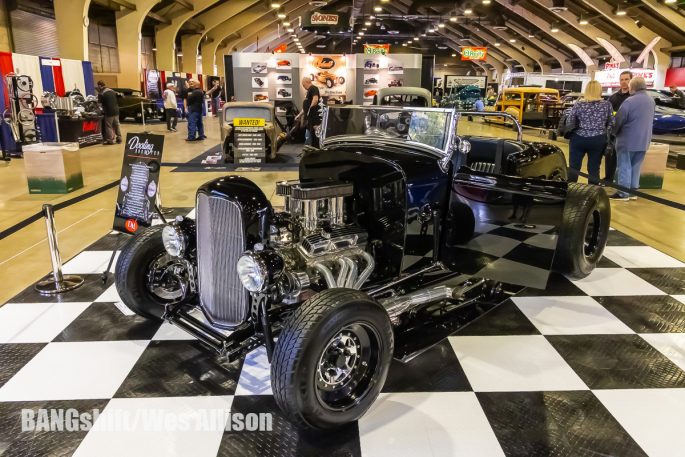 Lucille, the 1934 Chevrolet Roadster owned by Jeff Breault, was built at Devlin Rod and Customs with help from Johnson’s Hot Rod Shop, Chuck Rowland Interiors, The Roadster Shop, Wright’s Custom Chrome, EVOD Industries, ARP Fasteners, and FMW, Inc. This one is special not only because it is a Chevrolet, but also because it has this great mix of sex appeal and lurking power. I love it. 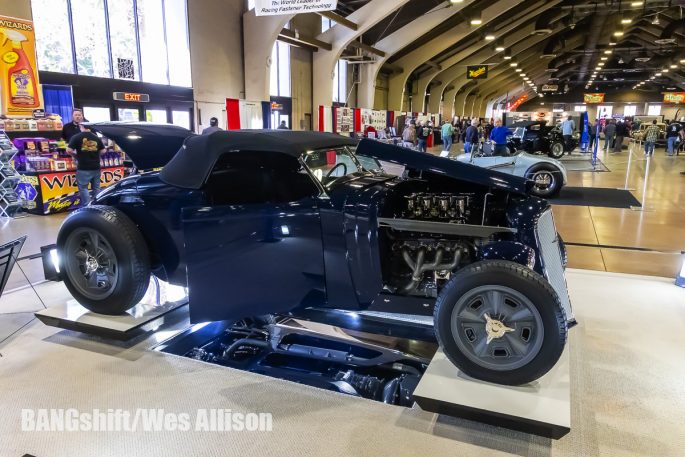 Sapphire ’33, is a 1933 Ford Special Deluxe Roadster owned by John Mumford. I’ve had the pleasure of meeting and traveling with John and can tell you that he is one dedicated hot rodder who has built many cars with the gang at Brizio and who has won the AMBR before. This one was designed by Chip Foose, built by Team Brizio, and featuring some pretty unique touches. The Aston Martin V12 for example, backed by a Tremec 5-speed. Then there is the Sid Chavers Upholstery, chrome from Sherm’s Custom Plating, and so much metal work you can’t even believe it. The car has been lengthened nearly 21 inches in the middle and then shortened up out back by 6 inches. Darryl Hollenbeck at Vintage Color Studio handled the paint and body, and it has the best of the best in parts. This is one special ride for sure. 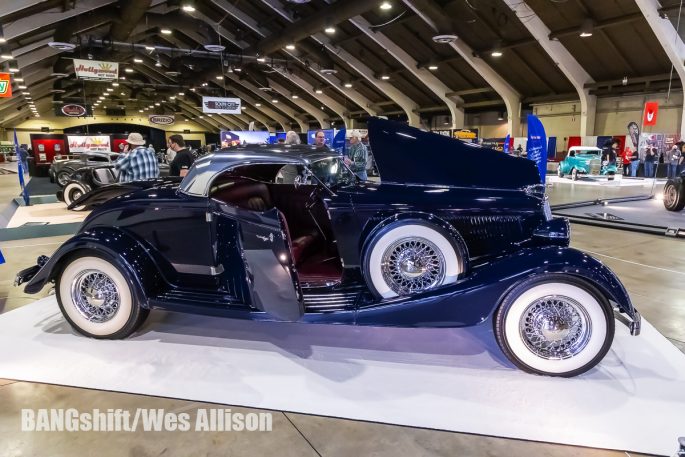 Mysterio, the 1932 Ford Roadster owned by Butch Verbeck was built at New Age Designs by Patrick Heady. Interior is by Shane Lile at Sewn Tight and it features a 1956 Chrysler 354 cubic inch Hemi that makes 425 horsepower. The chassis and suspension are all custom, with nothing left stock, and the same goes for the body. This one is full of custom touches that will keep you looking. 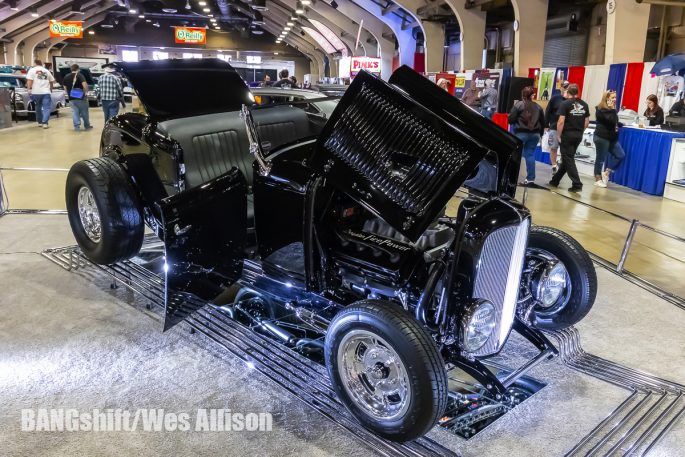 SIX Shooter, a 1929 Dodge DA Sport Roadster, was built by Jellybean AutoCrafters. Not only is it special because it is a Dodge, but also because it has parts and pieces that you’ll never see on another one. The engine is a 250 Cubic Inch Canadian Plymouth Straight Six engine that has some interesting history. It has a completely custom EFI system, all mounted on a 1 of 5 intake manifold from Tattersfield. Built in 1938, this intake was a dual carb intake that you’d never find anywhere else. The body is “stock” with all wood replaced so that the entire structure is all metal. This is something special. 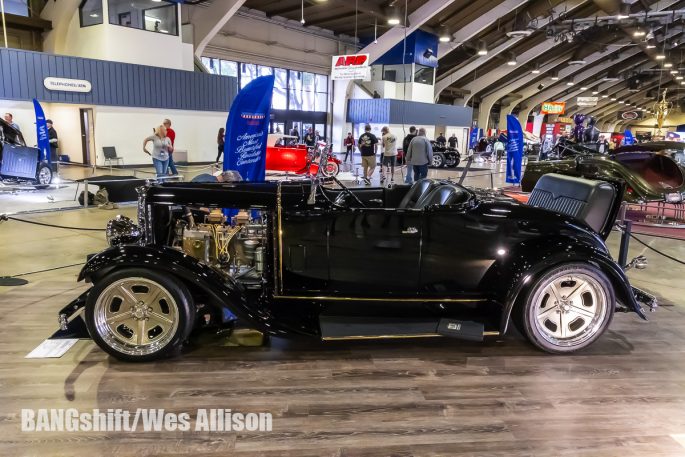 The post Grand National Roadster Show 2022: Here Are Photos Of All The Contenders For America’s Most Beautiful Roadster! AMBR appeared first on BangShift.com.