The Jawa 42 might not have become a sales blockbuster as Classic Legends had expected from it. However, many have bought the Jawa 42 in India just based on the way it looks. Inspired by the same design of the 42, someone from Rajasthan has transformed a two-decade-old Hero Honda Super Splendor to make it look like a Jawa 42.

The whole details of this modified Super Splendor can be seen in a video uploaded by the YouTube channel of ‘Reyansh Khichi’. Here, we can see an old Super Splendor completely transformed into a motorcycle, the design and graphics of which look very much similar to the Jawa 42. While it is not a replica but an inspiration, the efforts of customization look decent enough, which has sprinkled a new lease of life in the motorcycle.

Talking about the design first, this modified Hero Honda Super Splendor shares not a single panel with the original motorcycle. As a part of the makeover process, while some parts are custom-made for the motorcycle, some have been shared with the Royal Enfield Bullet. At the front, the motorcycle gets a rounded headlamp along with tiny rounded turn indicators on both of its sides. These lamps get blacked-out grilles. Above the headlamp sits a small cylindrical unit for the all-analogue instrument console.

Many parts are stock 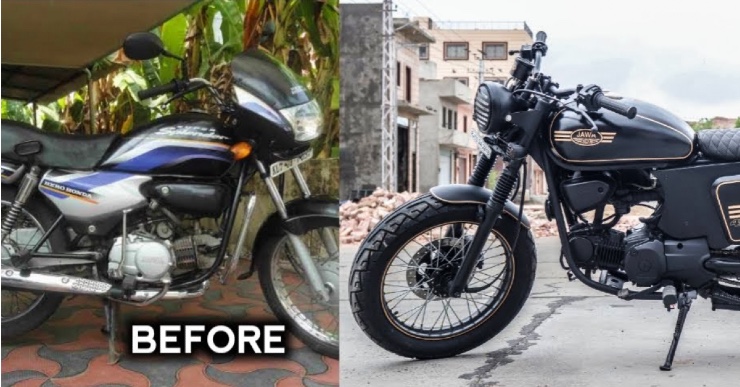 While the handlebar is the same unit that one can see in a new Jawa 42, the suspension frame has been retained from the original Splendor. The front forks with rubber gaiters come from a Bajaj Pulsar 150, while the front 17-inch wheel with 120/80-17 tyre and chopped front fender are custom units for this motorcycle. In addition, the modifier has also added a disc brake at the front, which was not present in the original motorcycle.

There are more significant changes on the side profile of this modified Super Splendor. Here, the fuel tank is taken from a Royal Enfield Bullet, while the side body panels are custom made with a specially-created flat base and angular side body cowls on them having graphics similar to the new 2.1 version of the Jawa 42. The same graphics have been crafted on the fuel tank as well.

The original 124cc engine of the Super Splendor has been overhauled in this transformation job and is now in a theme of black. Even the custom exhaust pipe of the motorcycle is painted in black, which creates a much throatier exhaust note compared to the stock exhaust note of the original Super Splendor.

At the back, this modified Super Splendor gets a curved rear fender, which again is inspired by that of the Royal Enfield Bullet. A rounded tail lamp and rounded turn indicators are mounted on this rear fender. The bike also gets a custom-made padded seat which adds to the look of the motorcycle.

Also read: Oppo to launch electric vehicle in India by 2024

The post Hero Super Splendor transformed into a Jawa 42 look-alike is a treat to the eyes first appeared on Cartoq.Cartoq Read More