In February 1989 at the Chicago Auto Show, Mazda pulled the wraps off a lightweight, affordable sports car that would go on to be the biggest-selling two-seater convertible in history. The Mazda MX-5.

Standing for Mazda Experiment and project number 5, the MX-5 went through seven years of heavily critiqued design, engineering and testing before being given the production green light.

It eventually went on sale in the UK on 14 March 1990, priced at £14,249. That day was also when we published our full road test of the affable sports car. Powered by a 1.6-litre inline four cylinder engine putting out 114bhp at 6500rpm, enabling a 0-60mph dash in 9.1sec and topping out at 114mph, the MX-5 was never about searing pace, as Autocar wrote back in the day.

“If you’re expecting a Mazda MX-5 to set you alight, you’re in for a disappointment. But as with everything the MX-5 does, it’s not the result but the participation that puts a smile on your face.

“This is the two-seat roadster that car enthusiasts have been screaming for since the demise of the old Lotus Elan. It also has the two ingredients essential in any sports car powerplant: instant throttle response and an invigorating exhaust note.”

The real ace up the the third-generation MX-5’s sleeve proved to be its five-speed manual gearbox. “Rising no more than a couple of inches from the transmission tunnel, the well-weighted gear lever snaps through its tiny throws with millimetric precision,” we mused. Allied to pin-sharp handling and spectacular balance to flaunt its 950kg kerb weight, it allowed the driver plenty of mid-corner adjustability.

“The MX-5 is a total success. Mazda’s single-minded determination to provide fun has produced a car of the rarest quality. Above all else, it is its ability to involve the driver intimately in its every reaction and response that makes it a joy to drive. Few others, at any price, can offer so much.” 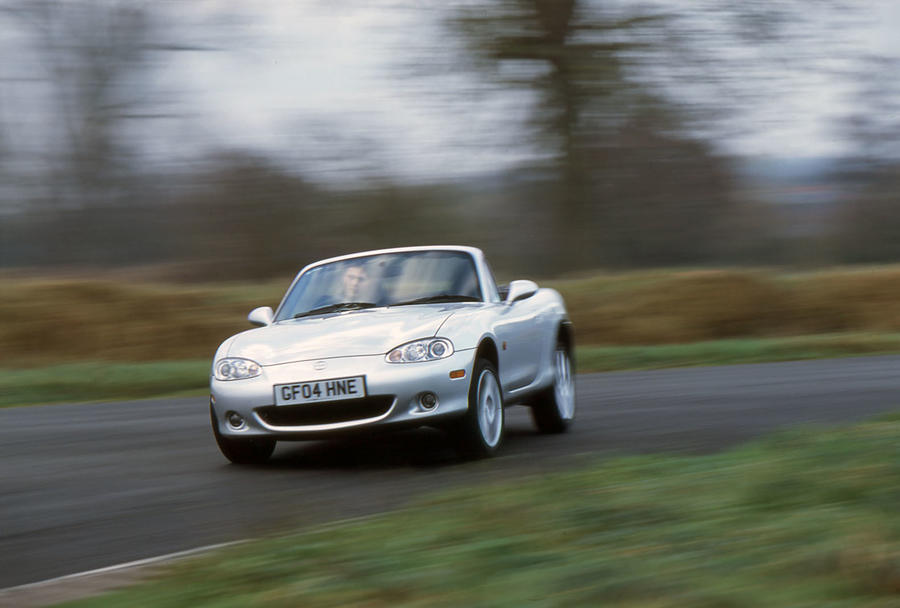 In 1997, the second-generation MX-5 arrived, sans pop-up headlights of the original – due to safety regulations – and with an extra 115kg of mass due to its sleeker look. The 1.6-litre unit was joined by a new 140bhp 1.8-litre motor to counteract the extra bulk, enabling 0-62mph in 7.8sec and a top speed of 130mph.

That model was a sales smash. Throughout its life, the second-generation received a facelift and more kit. The output of both the 1.6- and the 1.8-litre engines were boosted and buyers could enjoy a six-speed manual gearbox.

It would go on to develop even more of a reputation for rust in its later years than the car it replaced, but a handful of special editions and the same dynamic handling as its forebear would ensure many still see regular use on UK roads. 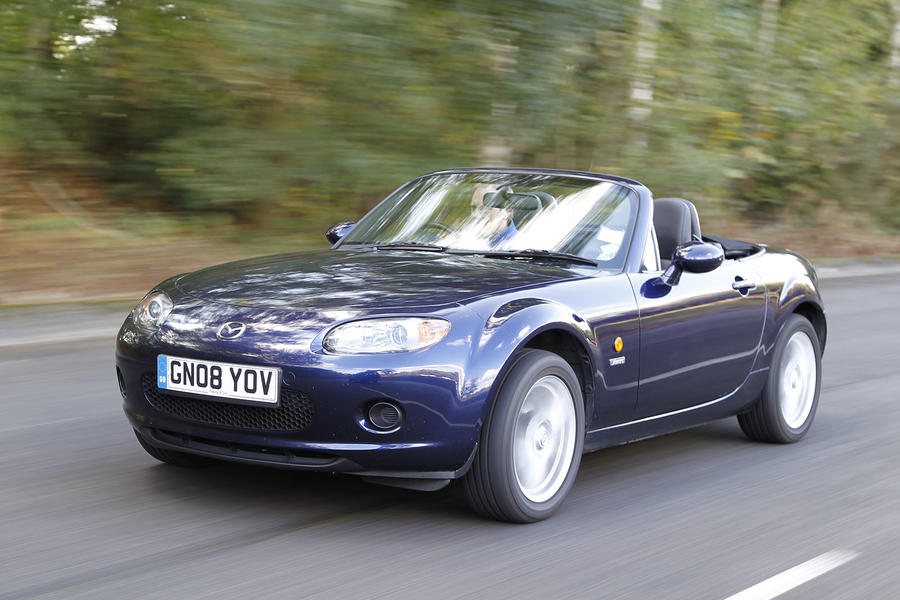 Seven years later, Mazda MX-5 was unleashed at the 2005 Geneva motor show, having undergone a complete overhaul. Penned by Yasushi Nakamuta and overseen by Moray Callum (yes, Ian’s brother), it boasted a more aggressive look with flared wheel arches while still harking back to the original design. Suspension changed from a four-wheel double wishbone setup to a front wishbone/rear multilink setup.

The 1.6-litre lump was dropped in favour of an entry-level 1.8-litre motor, while the flagship 2.0-litre engine developed 158bhp and was now available with a six-speed manual gearbox. Good job too, as the third-generation MX-5 tipped the scales at more than 1100kg. A folding hard-top model, McLaren 720S vs the Roadster Coupé was added to the line-up a year later, claiming a tiny increase in weight and a marked improvement in refinement.

In 2009, Mazda performed tweaks to make it sharper and improve the linearity of its steering. Power for the 2.0-litre motor was now up to 167bhp at 7200rpm. A final nip-and-tuck came in 2012 when the MX-5 gained a more aggressive front face, fresh 17-inch alloy wheels and a new ‘active bonnet’ to improve pedestrian safety. 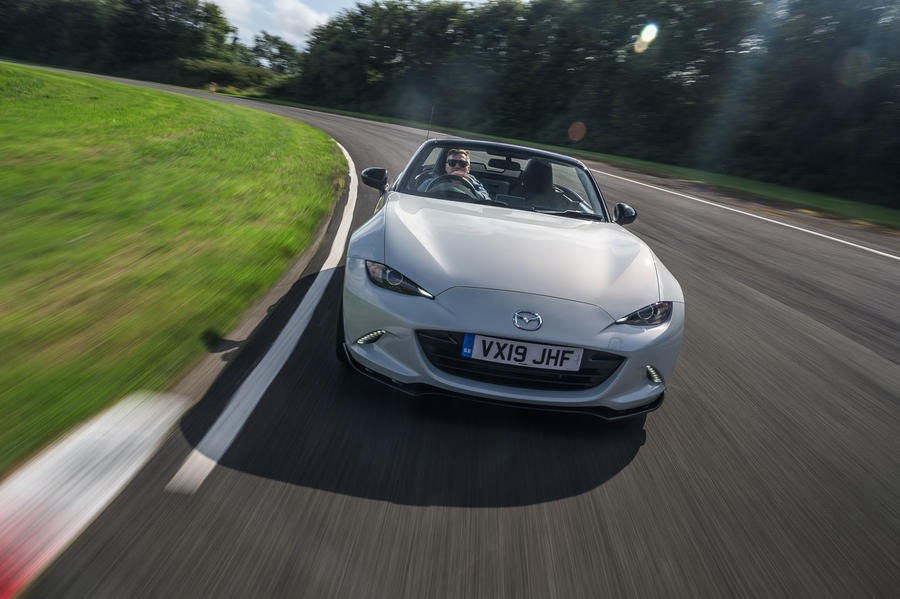 The MX-5 would receive an all-new fourth-generation version in 2014, with Mazda’s KODO design language influencing its look and shape. It arrived with a choice of 1.5 or 2.0-litre engines that both used Mazda’s Skyactiv fuel-saving technology, and weighed around 100kg less than the car it replaced. A lower centre of gravity helped it recapture some of the dynamic flair many thought was missing from the third-generation car.

“There isn’t a single area in which this new Mazda MX-5 fails to surpass its predecessor,” Autocar said at the time. “It’s shorter, lighter, more spacious and better laid out. It’s sharper-looking but still disarming and distinctive. It’s faster, more frugal and even more vibrant and engaging to drive.”

A new RF (Retractable Fastback) model would join the line-up, opting for more of a targa-style approach than the NC-generation’s folding hardtop, and it would get its own six-speed automatic gearbox. Soon after, in April 2016, Mazda would sell its one millionth MX-5, 27 years after the first car rolled off production lines.

No stranger to a special edition or two, Mazda would mark the MX-5’s 30th anniversary with a limited-run model. The 30th Anniversary edition could only be had in Racing Orange, and included forged aluminium wheels, Recaro bucket seats, Bilstein suspension and Brembo front brakes – though power remained unchanged, as to give it any more would go against the philosophy of the model. A further special would follow shortly after, the R-Sport, which would instead focus on the entry-level 1.5-litre engine with largely cosmetic updates. 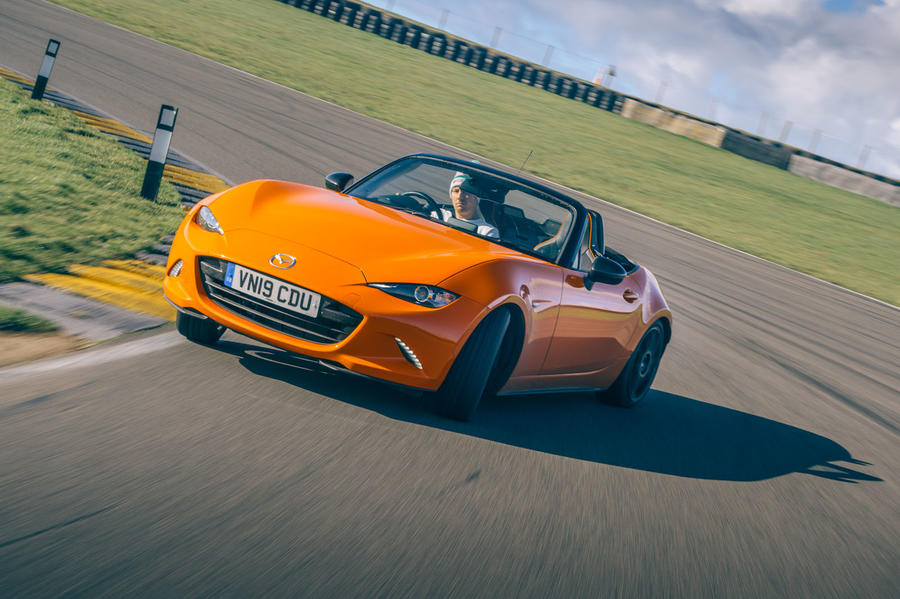 Throughout its life the Mazda MX-5 has built itself a huge fan base, thanks to its ease of use, affordability and low running costs. It’s proven popular in many forms of motorsport, and even been subject to a host of aftermarket conversions – including V8 engine swaps and forced induction systems.

The latest MX-5 remains a true testament to the original, combining jaw-dropping looks with a low kerb weight and nimble driving style. As for the future? Mazda is reportedly considering its options, with a hybrid or even fully electric powertrain for its fifth generation.

Mazda MX-5: Which is the most fun?