Honda Motorcycles India does not offer a wide range of products. They have been offering commuter segment scooters and motorcycle in India but, when it comes to performance motorcycles, the offerings are limited. In international market, they have a variety of motorcycles and many of them have never been launched in India even once. Here we have a walkaround video of one such motorcycle from Honda. The motorcycle is called NM4 and looks like something straight out of a sci-fi movie.

The video has been uploaded by BikeWithGirl on her YouTube channel. The Honda NM4, also known as Vultus is actually a cruiser motorcycle which was sold by Honda in the international market. It was on sale from 2015 to 2019. The main attraction of this motorcycle is its design. It has a futuristic design which grabs lot of attention while on the road.

The design of the motorcycle is the only reason why many on the road noticed it. It has a very unique sleek and sharp looking front end. The owner of this motorcycle mentioned that there is only motorcycle of this kind in India which means many of us have not seen anything like this. For a person who is looking at this motorcycle for the first time, it might look like a modification job.

Actually it is not a modified motorcycle but, this is how Honda made this. It has a small LED headlamp placed at the front with a large fairing around it. The fairing is designed in a way that it gels well with the overall design of the fuel tank. It is a bulky looking motorcycle both from the front and rear. The fairing and the side boxes at the rear are actually storage compartment which is actually very practical.

The ORVMs are integrated on the fairing rather than sticking out from the handle bars. The vlogger was very impressed with the motorcycle when she saw it for the first time. The lowered seat and the forward set foot rest offer a relaxed riding position. The owner explains that this is motorcycle comes with an automatic transmission which makes things a lot more relaxed for the rider. 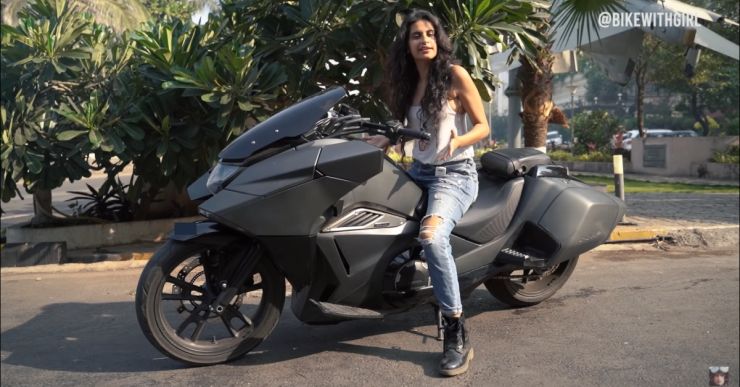 There is no physical clutch lever on this motorcycle and comes with a Dual Clutch transmission. The motorcycle is powered by a 745-cc, liquid cooled, parallel twin engine that generates 54 bhp and 68 Nm of peak torque. The vlogger took the motorcycle for a spin and fell in love with it instantly. She mentions that the motorcycle comes with a regular Drive mode and a Sport mode. It also has a manual mode where the rider can shift gears using paddle shifters on the handle bar.

The gear shifts on this motorcycle were very smooth and the vlogger can be heard saying that she did not feel that the gear was shifting even once during the ride. Wherever she took the motorcycle, it was attracting a lot of attention from the public. The motorcycle has a decent sounding exhaust as well.