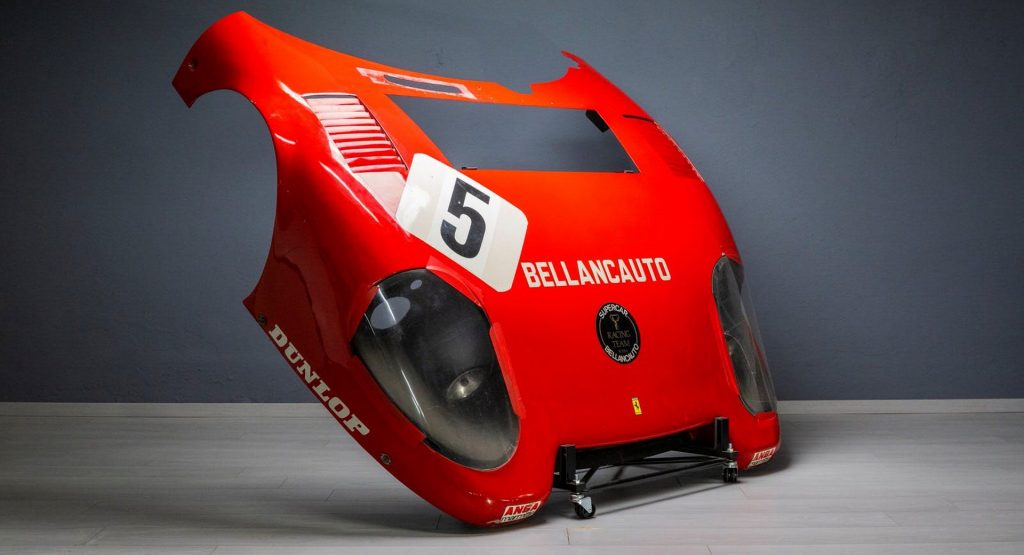 A one-off piece of bodywork from a rare Ferrari race car is up for sale, and would look great in a man cave, a museum, or back on the original race car.

Ferrari returned to endurance sports car racing in 1980 with the 512 BB LM “Berlinetta Bialbero” (Berlinetta Twin Cam). The vehicle was fitted with a larger 5.0-liter engine which produced 550 horsepower, and unique aerodynamic bodywork which allowed it to reach its top speed on the Mulsanne straight at LeMans.

Driven by Fabrizio Violati, Maurizio Flammini, and Spartaco Dini, the 512BBB (No typo here, the third B stands for Bellancauto) took first place in the IMSA GTX/GTP class on its first outing at the 1,000km of Monza in April 1981. The special bodywork would remain on the 512 for the 1981 24 Hours of Lemans, as well as the 1982 1,000km of Mugello.

Read More: This $30,000 Ferrari Book Comes With A Stand Made From Fake Rocker Covers And Exhaust Headers

The original, unrestored piece is in remarkably good shape for having competed in multiple endurance races, and still wears red duct tape over the headlight covers to keep them from coming off at 200+ mph at LeMans. Just a few stone chips are present, and one of the headlight covers is slightly cracked.

The piece carries the racing number 5, which was used at the 1000km of Mugello in 1982. For 1984, the front bodywork of the vehicle would be swapped for a more compact “Series II” style, and this front clip was mothballed in Violati’s Collezione Maranello Rosso in Italy.

The piece would be a welcome addition if you already own chassis 35526, which came up for sale last year.