Apart from Apple and Xiaomi another Chinese smartphone manufacturer has entered the realm of the automotive sector, and that phone maker is none other than Huawei. On the 23rd of December, the Chinese brand launched its Hybrid SUV named the AITO M5 in China. This new SUV is the second offering from the company and reportedly within the first 96 hours of its launch, the bookings crossed a tally of more than 6500 units. 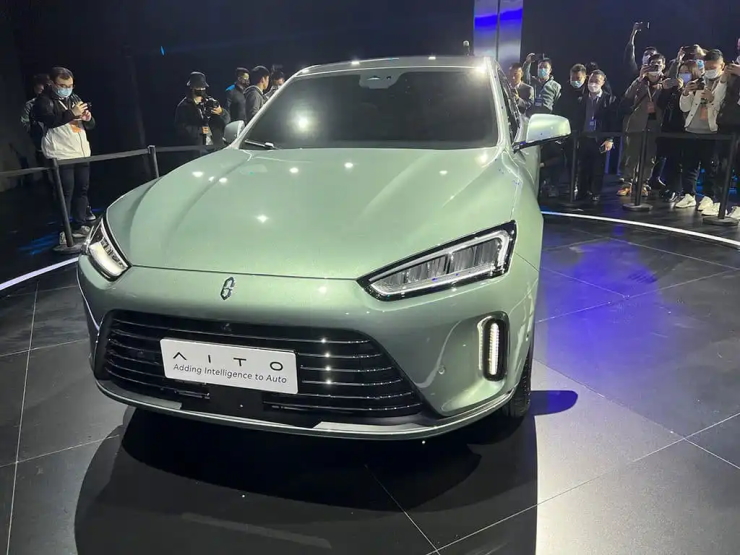 The AITO M5 is a smart luxury SUV from Huawei which has been co-developed with another Chinese brand Seres, which is a part of the Chongqing Sokon conglomerate company. The SUV features Huawei’s HarmonyOS operating system and is claimed to be a direct rival to Tesla Model Y and Porsche Macan.

Dimensionally, the Huawei AITO M5 has a wheelbase of 2.88 meters and a length of 4.77 meters. While the silhouette seems to be heavily inspired by the Porsche Macan. The front of the SUV houses a massive grille along with sleek LED headlamps and vertical LED DRLs in place of the traditional fog lamp in the bumper. Additionally, the large wheel arches of the SUV accommodate some beautiful turbine-like machined alloy wheels. While in the rear, the LED taillamps run across the entire tailgate providing the SUV with a rather smooth design.

On the interior side of things, the AITO M5 boasts a very spacious cabin which comes loaded with tons of creature comforts and amenities along with various industry-first features. Some of these features are a massive 15.6-inch touchscreen infotainment system that comes equipped with Huawei’s HarmonyOS operating system. Along with advanced and intelligent features such as L2 + level intelligent driver assistance, HarmonyOS powered split-screen, one-button transfer, no sense of Huawei watch NFC Bluetooth car keys, 3D face recognition, an auto-login account of Huawei.

Customers can choose from the options of one or two electric motors, that power this hybrid SUV. The rear-wheel-drive version of the M5 will have a maximum power of 204 hp, and the four-wheel-drive option will have an output of 224 hp. The SUV will also come with a 1.5-liter turbocharged four-cylinder engine that delivers 125 hp, however, this fossil-fueled engine will only serve as a generator to recharge the 40 kWh battery pack. Overall, the combined range from the hybrid system is claimed to be around 1,195 kilometres by Huawei and the SUV could also do a sprint of 0-100 kmph in just 4.4 seconds.

After the subsidies from the Chinese government, the AITO M5 will cost around Yuan 250,000 (approximately Rs 29,45,915) which is significantly lower than the vehicle it claims to compete with. The all-electric Model Y is the Hybrid SUVs direct rival and it is currently priced at Yuan 280,752 (approximately Rs 33,07,887) post-subsidy in China. The company has also revealed that the deliveries of the AITO M5 will begin from February 20, 2022, after the Lunar New Year.