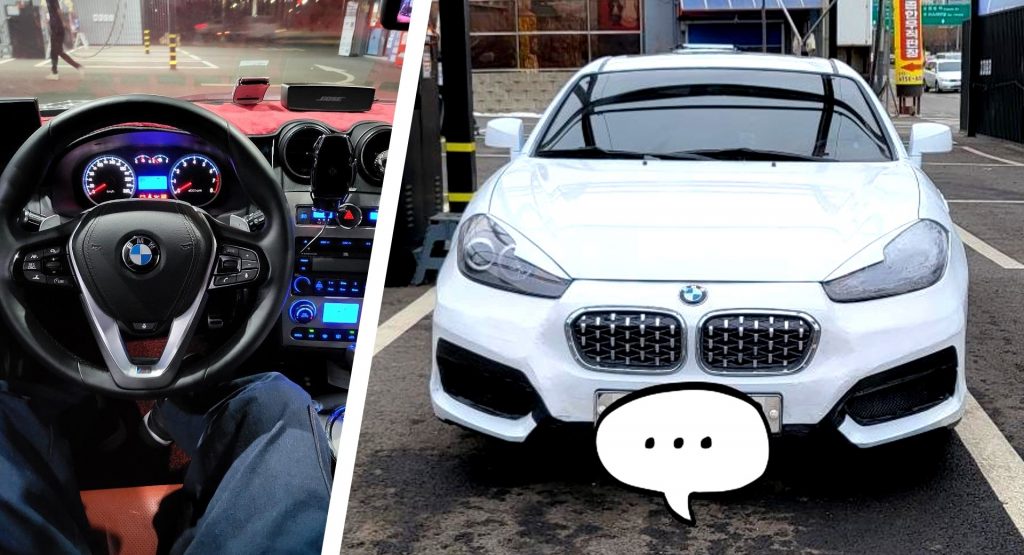 The Hyundai Tiburon is an affordable two-door coupe from Korea with a flashy design, but what happens if you want something more premium-looking? A Korean owner found the solution after transforming his Hyundai into a BMW impersonator.

The man who goes under the nickname Dimdi on the Korean forum Bobaedream posted a few photos of the “BMW” Tiburon along with the story. The first post from September 2021 shows a black-painted car featuring BMW emblems, bad-boy headlights, a custom front bumper with the grille from the previous generation 4-Series, door handles from the 5-Series, plus the M and xDrive badges at the back.

In February 2022, Dimdi posted an update on his project with a seemingly different Tiburon. This one is white and has a new front bumper that looks more in line with BMW’s current design language. The grille is higher and the new bumper has M-Package style intakes making the Tiburon loosely resemble a 2-Series Gran Coupé from certain angles.

A set of dark-painted BMW wheels are the finishing touch together with Maserati-style vents on the front fenders. From an Instagram post by @Motorsjason, we can also see that the car got a diffuser and a rear spoiler. We have to admit though that the black car had a sleeker front end, with the white car looking more like an amateur’s effort in terms of surfacing.

Interestingly, the conversion doesn’t stop with the exterior. Inside, the owner added a genuine BMW steering wheel with buttons and an M badge, and a BMW key fob for the Hyundai key. The rest of the cabin is all Tiburon which means he won’t be getting the fit and finish of a real BMW but at least he can get away with using the #BMW hashtag on social media.

A post shared by 남자들의 자동차 Motors in Korea

Dimdi admitted that it was really hard to transplant the components that weren’t compatible with the Tiburon, with the whole build taking six to seven months. However, he said that the DIY project was fun and he enjoys the attention since every time he goes to the car wash people are asking him what kind of car is this.

The Tiburon, sold as Coupé in Europe and Tuscani in Korea, was offered between 1996 and 2008 in two generations. The pictured model is a later example from 2008, which means it is the second facelift of the second generation. The stock 2.0 liter engine produced 141 hp (105 kW / 143 PS) and 186 Nm (137 lb-ft) of torque and in this example, it is mated to a four-speed automatic gearbox sending power to the front axle.

If you are wondering about performance, back in the day, Hyundai announced a 0-100 km/h (0-62 mph) in 10.4 seconds and a top speed of 200 km/h (124 mph). Those figures may not be worthy of an M badge but are admittedly good enough for a Hyundai from the late ’00s. Unfortunately, the Hyundai models of that era were shy of Albert Biermann’s influence which means that their driving dynamics were far from BMW’s. Hyundai never made a direct successor to the Tiburon which was indirectly replaced by the Veloster.