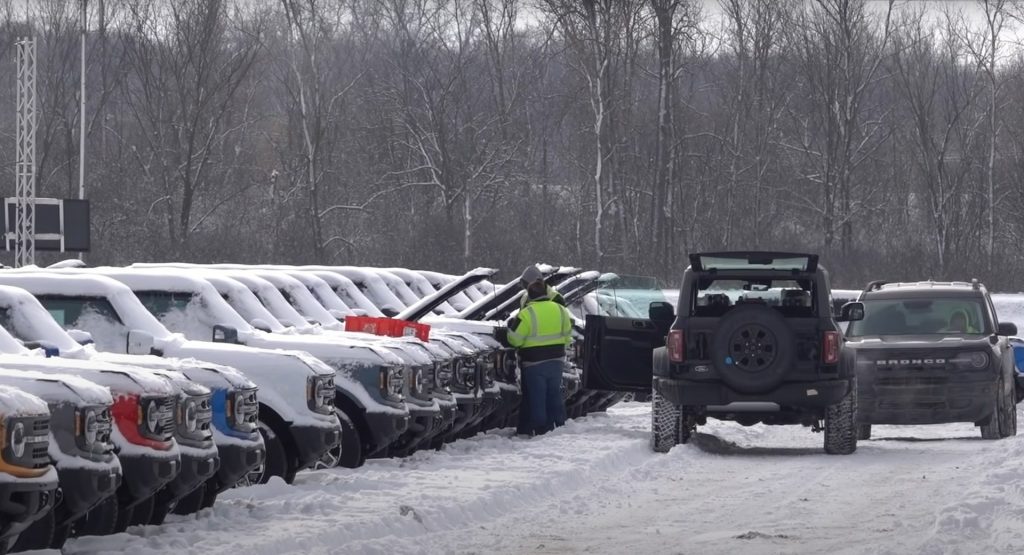 Sometimes building something as popular as the Ford Bronco can be a bit of a double-edged sword. Sure, the blue oval brand is very happy that the public loves the Bronco but chip shortages among other factors have severely slowed production.

Now, thousands of Broncos are waiting out in the cold and snow in this Michigan lot that has been nicknamed ‘Dirt Mountain’ and more recently, ‘Ice Mountain’ by Bronco forum members, waiting for chips to be installed before they can make their way to their first owners.

A few weeks ago, the YouTube channel KenStevens5150 drove by a Ford’s Michigan assembly plant and noticed all of the SUVs lined up much like they were last year. Back then, it was due to an issue that required the replacement of every single Bronco hardtop. Now, Ford says that it’s purely the chip shortage to blame for the backed-up Broncos.

“The global semiconductor shortage continues to affect Ford’s North American plants – along with automakers and other industries around the world,” Ford spokesman Said Deep said in an email to Autonews. “Behind the scenes, our teams have been working on how to maximize production, with a continued commitment to building every high-demand vehicle for our customers with the quality they expect. Our goal is to have all updated in the next 90 days, pending chip availability.”

When will you get your new Bronco?

So hopefully, if your Bronco is inside this parking lot, you’ll have it by sometime in May or June at the latest. Interestingly enough, there doesn’t seem to be a clear rhyme or reason why one build might come sooner than another. In the same report, two different customers reported drastically different delivery windows.

Due to the delays, Ford has proactively reached out to some owners by providing gifts as a way of thanking them for their continued patience. One such offering was a Bronco-branded backpack full of survival supplies that had originally been available online for sale but had since been discontinued.

Since the initial video was shot a few weeks ago, an updated one has appeared on the channel showing off the same lot with what looks to be the same stockpile of vehicles. Have you been waiting on your new Bronco to arrive and has Ford offered you anything for your patience? Let us know about your experience in the comments below.