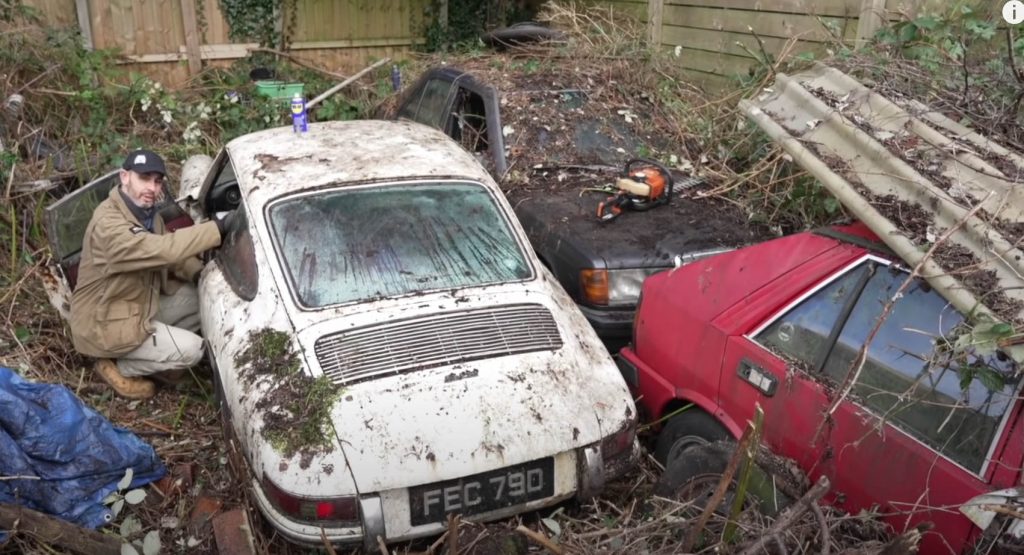 Barnfind videos never fail to impart a kind of magic and wonderment to them — classic cars that have been left untouched for years, ready and waiting to be transformed into lovingly recommissioned time capsules. The video below evokes just as strong feelings, if less of the wonderment and more sorrow.

Known for uncovering some rare classic and youngtimer metal via his YouTube channel The Late Brake Show, Jonny Smith this time takes us to meet Rein Adamson in Cardiff, Wales. However, in this instance, the cars in question are less than preserved, left out to the elements and losing a battle with the undergrowth.

Nevertheless, Rein’s collection includes some interesting cars, including a five-speed Porsche 912, a Porche 924 Turbo, a Lancia Delta 1.3, a Fiat 124 Spider, and assorted MX-5s, BMWs, and Mercedes-Benzes. Sadly, a few cars have been harmed through vandalism, including a BMW E30 318is, which has suffered extensive fire damage, save for the engine and front suspension.

See: North Carolina Is The Unlikely Venue To One Man’s Collection of Classic British Cars

Looking in from the outside, it’s easy to wonder as to why anyone would let this collection seemingly rot away, but Rien relates how life doesn’t always go to plan. A spate of deaths within his family, including his wife after just five years of marriage, brings reality sharply into focus.

The silver lining is that these cars will now be offered for sale. The owner’s enthusiasm for his collection is evidenced in the way he speaks of each, as he relates that many were in driveable condition before being stashed away — some with brand new parts, engines, and fresh oil — although his optimism may not be shared by everyone hoping to resurrect them. It’s hard to tell from the video just how feasible a restoration on some of the cars featured would be, but we certainly hope that some of the rarer examples end up getting the attention they deserve.